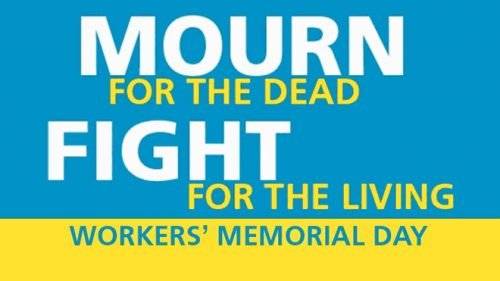 In 2017, 32 Iowans lost their lives in the workplace. These tales of tragedy include construction workers, steelworkers, farmers, grain operators, firefighters and other laborers sacrificed for the sake of profit. Their stories serve as grim reminders of the losses suffered by the working class in the name of capitalist greed. (tinyurl.com/y952bl6d)

The Des Moines ceremony at the Capitol building on April 27 was marred by the appearance of right-wing Iowa Gov. Kim Reynolds, who said: “I hope you find peace in the memory of their service and their deep commitment to others. Their legacies live on through the people they touched by their selflessness throughout the years.” (whotv.com)

Reynolds’ words were soaked in crocodile tears, for it is her policies and those of her cohorts that endanger workers by attacking unions and supporting deregulation policies. If Reynolds and fellow “right-to-work” (for less!) devotees continue to have their way, more workers will risk their lives, and this will have devastating consequences for their communities.

A recent AFL-CIO report titled “Death on the Job: The Toll of Neglect” found that “150 workers died on the job each day from preventable, hazardous workplace conditions” and called that “a national crisis.” The “Death Toll” report concluded that the most dangerous sectors of industry are in agriculture, construction and transportation.

It has been shown that “right-to-work” states put workers at bigger risk for injuries and death. As noted by the Center for American Progress, “Right-to-work laws lower worker pay and benefits and make workplaces more dangerous for all workers — whether unionized or not — by weakening unions.”

In December 2017, the U.S. Bureau of Labor Statistics reported a 7 percent increase in fatal work injuries in 2016 compared to that in 2015, with “a total of 5,190 fatal work injuries recorded in the U.S.” As noted by the AFL-CIO, “This does not include those workers who die from occupational diseases, estimated to be 50,000–60,000 each year.”

It is not surprising that President Donald Trump, an iron-fisted defender of the exploiting class of millionaires and billionaires, did not acknowledge or make reference to the occasion of Workers’ Memorial Day.

As reported by the AFL-CIO, “The Trump administration has launched an all-out assault on regulations. The president has ordered that for every new protection, two existing safeguards must be removed.”

Workers cannot rely on the empty promises of Democrats or Republicans made on the campaign trail, or on the “good will” of those in elected office. Only when workers stand up to take power into their own hands can they secure safer working conditions and a higher standard of living.