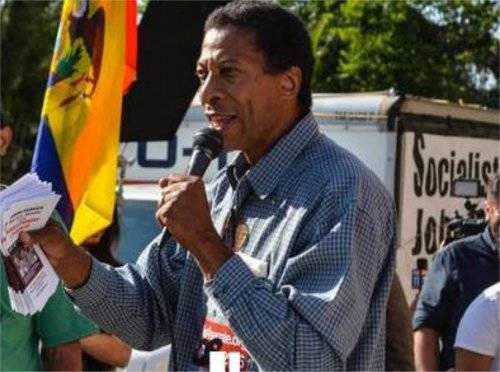 John Parker, longtime socialist and member of Workers World Party, announced his candidacy for the U.S. Senate during a May 4 press conference in Los Angeles. Parker, who is running on the Peace and Freedom ticket, is an anti-imperialist, anti-war activist. He wants to end capitalism and calls for a referendum to convert vital industry from private to public ownership.

Also speaking at the conference were Takiyah Thompson and Kil Sang Yoon of the American National Coordinating Council, who called on people to vote for Parker. Thompson is a freedom fighter and student at North Carolina Central University who climbed a Confederate statue in Durham, N.C., in 2017. She began the act of taking it down two days after white supremacists in Charlottesville, Va., attacked anti-racist activists.

Thompson said, “The Parker campaign pushes questions that are relevant to the people. Diane Feinstein, a Democrat running against Parker, talks about gun violence. But as a Black woman, I’m more afraid of being gunned down by the police than by a mass shooter.”

Parker’s campaign platform, detailed in campaign leaflets, includes demands to stop deportations and attacks on migrant workers. He is proposing an Oscar Grant bill to empower Black and Brown communities with the means to remove local police departments and use the resources to enable community-organized self-policing and self-defense. He supports the fight to end white supremacy, sexism, misogyny, anti-LGBTQ violence and discrimination.

“Homelessness is on the rise in Los Angeles, ICE is creating terror in the migrant communities, and police continue to kill Black and Brown people with impunity. This is why we need revolutionary change,” said Parker.

Parker’s goals also include defunding the military, ending U.S. imperialist and proxy wars, and using the trillions going to the Pentagon to fund jobs, homes, free health care and education, and to stop global warming.

Donate to Parker’s campaign at Socialist4senate.org. For more information and to volunteer: facebook.com/parkerforsenate or call (323) 306-6240.