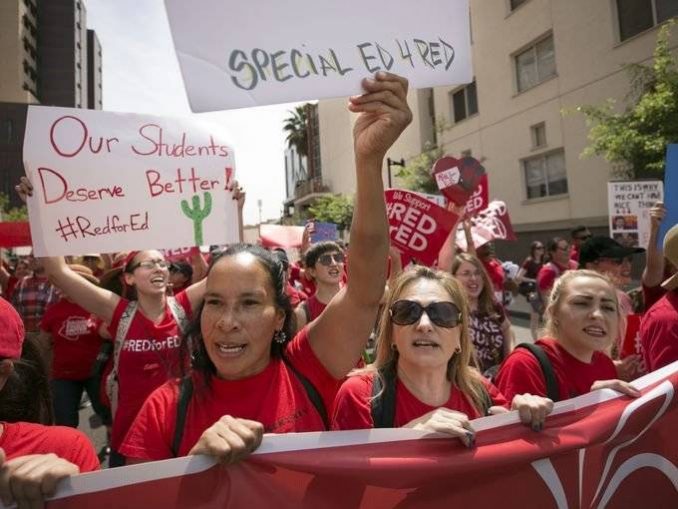 The arch reactionary governor and Republican-led legislature were forced to pass a budget that will tentatively give some teachers a 10 percent raise next fall, though that could be lower if the budged total is distributed to all school workers. A 5 percent raise is promised in the next two years, but that will only happen if each legislature votes to include it in that year’s budget. Arizona public schools may receive a $200 million increase in funding.

Unions in the strike were the Arizona Education Association and the American Federation of Teachers. Playing perhaps an even more important role was the recently created Facebook group, Arizona Educators United, which started the #RedForEd movement through social media

The strike was significant because Arizona has suffered from privatization of public education more than most U.S. states. In 1994, Arizona became one of the first to open for-profit charter schools. Very few charter schools are unionized, while most pay less than public schools and workers have very few to no benefits.

The state was also the first to create Empowerment Scholarship Accounts, prepaid bank cards that parents use for tuition at private, religious or charter schools. ESAs steal money from public school districts. West Virginia education workers were successful in defeating ESAs in their strike.

While the Arizona school workers’ action officially ended May 3, the results are complex. The #RedForEd walkout was a direct blow to the right-wing state government and forced huge concessions. As with West Virginia, the Arizona strike did unite teachers and other school workers, as well as students and parents.

But not all Arizona workers went back to school happy. It is hard to call the action a complete victory.

On May 1 — International Workers’ Day or May Day — union officials of AEA and AFT, along with leaders of AEU, urged the Arizona strikers to go back to classrooms on May 3. Union officials assured members that “a deal is going to be made.”

School strikers saw the same thing in West Virginia when union leaders made a similar promise. But, like the West Virginia strikers, Arizona education workers were not ready to go back to work until the governor’s proposal was signed.

During current school worker strikes, union heads have encouraged the rank and file to shift their militant energy to focus on the bourgeois election process. The same strategy was used in Wisconsin in 2011 — and then the union busters were voted back in.

Unity was strong during the Arizona strike, but not everyone who participated will get a salary increase. While most teachers will receive a 10 percent pay raise next year, many support staff employees, including counselors and librarians, will not.

The corporate media are falsely claiming that everyone is going to get a “20 percent pay raise” because of how the money seems to be allotted. While right-wing legislators are upset, they now have to set aside $200 million for public schools. That figure is not comparable to state funding prior to 2008.

Many strikers strongly believe that if they had stayed out a little longer, as West Virginia school workers did, they could have gotten more of their demands met.

Gov. Doug Ducey and his corporate-controlled legislature did not want to give one penny to fund educators or public schools. Their contempt for school employees and the majority Latinx, Indigenous and Black student population is apparent in legislation they have pushed for the last three decades. Charter schools and vouchers have led to massive segregation of nationally oppressed students. Charter schools also discriminate against LGBTQ students and students with disabilities.

Though the strike may be a partial victory, education workers in Arizona and elsewhere are learning about the power they hold as workers. Teachers and support staff may go out again, especially if they do not get what was promised to them.