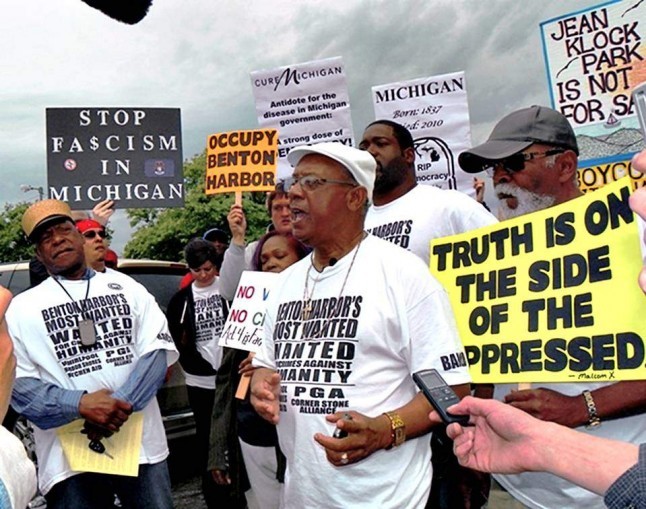 On May 1, the Michigan Supreme Court unanimously overturned the conviction of former political prisoner the Rev. Edward Pinkney, who served 30 months behind bars until his release in June 2017. Pinkney was framed up on five felony counts for allegedly changing some dates on a recall petition in Benton Harbor, Mich.

Pinkney’s original trial in 2014 was remarkable for the lack of any witnesses or actual evidence against the community activist. The all-white jury was told that “you don’t need evidence to convict Edward Pinkney.” The prosecutor, with the approval of the judge, introduced Rev. Pinkney’s political activism, protected by the Constitution, in order to prejudice the jurors.

Pinkney’s walking a picket line, his inviting the Rev. Jesse Jackson to speak in Benton Harbor and his outspoken radio broadcasts were all allowed as “evidence” of his likelihood to commit forgery on recall petitions.

Jailed immediately after being sentenced to 2.5 to 10 years in prison in December 2014, for the next 30 months Pinkney was moved from prison to prison. He spent much of his sentence in Marquette Branch Prison, about 500 miles from his wife and friends.

At the isolated Marquette facility, Rev. Pinkney’s life was threatened by racist guards. A national campaign was carried out to deluge Michigan’s governor, the prison warden and the Department of Corrections with calls and letters demanding that steps be taken to insure his safety.

Thousands of letters and cards to the political prisoner flooded into the prisons to boost his morale and serve as a warning that the public was watching out for his welfare. Two wonderful local activists visited Rev. Pinkney weekly while he was in Marquette Prison. Many believe that it was this widespread and sustained support that kept the (now) 69-year-old leader alive.

Lawyers from both the National Lawyers Guild and the ACLU took Pinkney’s case to the Michigan Court of Appeals in 2016. That three judge panel not only upheld his conviction but also refused to grant bond pending appeal.

Rev. Pinkney served his full 30 months. The appeal to the Supreme Court of Michigan was filed while Pinkney was still behind bars, yet their decision didn’t come down until almost a year after his release.

While the grounds for striking down all convictions were quite technical, the conclusion was an unmistakable victory for Pinkney and his supporters. It stated the “defendant as not properly charged under Paragraph 937 with a substantive offense of election-law forgery. Therefore, his convictions must be vacated and the charges dismissed.”

Rev. Pinkney has continued to organize for justice outside the walls, just as he did inside the prisons. Currently, he is organizing a march and rally in Benton Harbor for May 26 to protest the Senior PGA golf tournament held on parkland stolen from the people of that city by private developers and corrupt politicians.

For more information, go to bhbanco.org.