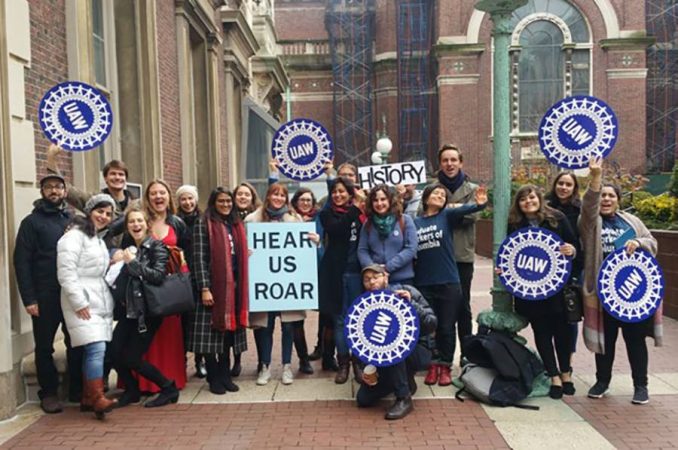 Teaching and research assistants at Columbia University went on strike April 24, demanding the university recognize and bargain with the Graduate Workers Union. This was the first strike authorized by the GWU since it formed in 2014. The strike vote, taken earlier in April, passed with an overwhelming 1,832 to 136 majority.

The GWU planned to strike during the last week of classes, April 24-30.  While the Colombia administration has not yet capitulated to their demands, next steps for recognition and a decent contract are already underway.

That a strike happened at Columbia is no small victory.

Contrary to its reputation as a progressive institution, Columbia is a private university managed for profit by a board of trustees comprised of real estate tycoons, banking directors, hedge fund managers, venture capitalists and their lap-dog lawyers.

This rogue’s gallery of the ruling class does not run Columbia in the interest of its workers. Not once in his 15 years in office has Colombia president Lee Bollinger sat down with any campus unions, which include United Auto Workers Local 2110, 1199SEIU and Transit Workers Union Local 241.

Ruled by Bollinger and his bourgeois board of trustees, Columbia has waged a silent war on unions by eliminating unionized positions as workers quit or retire. This has reduced the number of unionized positions by the hundreds and weakened union power on campus.

Despite these conditions, over the last several months events on campus and across the country have created momentum for workers’ rights at Columbia, reaching a boiling point with the GWU strike.

The struggle cycle began Jan. 30, when, after three years of legal delays, Columbia officially announced it would not recognize the Graduate Workers Union and would not even recognize teaching and research assistants as workers.

The university claimed its main concern is “training scholars” and that bringing in a third party like the United Auto Workers would reduce the relationship between graduate workers and faculty to “ordinary terms of employment.”

However, teaching and research assistants’ labor is vital to the functioning of the school. They perform research that secures grants and funding, and teach classes to undergraduates whose tuition is the financial bread-and-butter of the university.

The struggle for recognition as workers is one of the unique aspects of GWU’s struggle. The significance of a slogan like “Graduate Students are Workers!” in raising class consciousness on Columbia’s campus cannot be overestimated.

Union busting by the university

As Columbia was maneuvering to destroy the GWU, it was also waging another battle against another union on campus.

For two years, 1199SEIU has struggled with Columbia to get eight medical assistants included in its contract. Over the course of 31 bargaining meetings, 1199SEIU fought attempts to erode the quality of the contract for these workers — including lowering pay, slashing health care and eliminating provisions that provide protection against sexual harassment in the workplace.

In February, the Columbia University College Republicans invited Mark Mix, president of the National Right to Work Foundation, to speak. Mix and his foundation are responsible for much of the union-busting legislation that has barreled through the U.S. in recent years. They are key players in the Janus v. American Federation of State, County, Municipal Employees case currently being heard by the Supreme Court. Mix was set to speak on campus just before the first oral arguments were heard.

1199SEIU and UAW Local 2110 took this as an opportunity to connect their struggles and raise awareness about union busting. They organized a protest against Mix, the first joint action by unions on campus in years. (WW, Feb. 22)

The GWU raised that the National Right to Work Foundation had actually submitted an amicus brief on behalf of Columbia in its attempt to crush their union. That connection cut through Columbia’s façade of progressive liberalism and revealed its reactionary core.

As the struggle at Columbia developed, there was a surge of working-class resistance across the country — from the Working People’s Day of Action in February to the wave of teachers’ strikes rippling out from West Virginia to Oklahoma, Arizona, and including Puerto Rico.  Conditions for a strike at Columbia University were ripe.

Days of the strike

Almost immediately after the Graduate Workers’ mid-April strike vote, the

university administration tried to rally the community against the workers. In an email, the university argued that unionizing would force rank-and-file members to pay dues to an organization — like the UAW — whose positions they may not all agree with.

This is the argument being made against unions in Janus v. AFSCME and was a clear example of the National Right to Work Foundation’s role in helping Columbia fight the GWU.

The email also drew on the age-old bosses’ argument that workers are greedy, claiming graduate workers already receive $82,000 a year in “tuition and other benefits” — as if tuition pays the rent. In reality, teaching assistants receive far less in pay — sometimes as low as $18,000 a year.

The administration also pointed to the Trump administration’s recent reversal of a 2016 National Labor Relations Board decision to recognize graduate students as workers — as if that added legitimacy to their argument.

Despite this hostile move, a large swath of the community saw through the slander and joined the picket line throughout the strike.

Solidarity came from campus unions, including 1199SEIU, TWU Local 241 and Barnard Contingent Faculty (UAW Local 2110), as well as from workers and unions such as Communication Workers Local 1104 and several building trade laborers working on campus. Teamsters Joint Council 16 refused to deliver packages to the university during the strike.

GWU won the support of Columbia students by raising the struggles against racism and sexual assault that have seen militant battles during the last year. In October 2017, protesting students shut down two white supremacists scheduled to speak on campus.  Shortly before the GWU strike, students occupied a building demanding more support for survivors of sexual assault.

Representatives from these struggles spoke at pro-union rallies of hundreds of striking graduate workers. The community effort in the GWU strike resembled the solidarity seen in other education strikes this year,

During the strike week, attempts were made to extend or deepen the strike. Some graduate workers set up tents and tried to start an occupation on campus on April 24, but it lacked rank-and-file support and the administration swiftly shut it down. However, as the end of the strike drew near with no bargaining with the administration in sight, support for extending the struggle grew.

A petition circulated calling for an indefinite extension of the strike until a contract was won. By April 30, it had 639 signatures. On May 1, the GWU joined Workers World and a coalition of im/migrant and workers’ groups celebrating May Day in Union Square.

The contracts of the UAW and SEIU campus locals are up at the end of 2018. It remains to be seen what the impact of the GWU strike will have played on their negotiations or on future labor actions on campus.

Undoubtedly, the class solidarity that is being built on campus will provide the necessary infrastructure for greater victories to come.