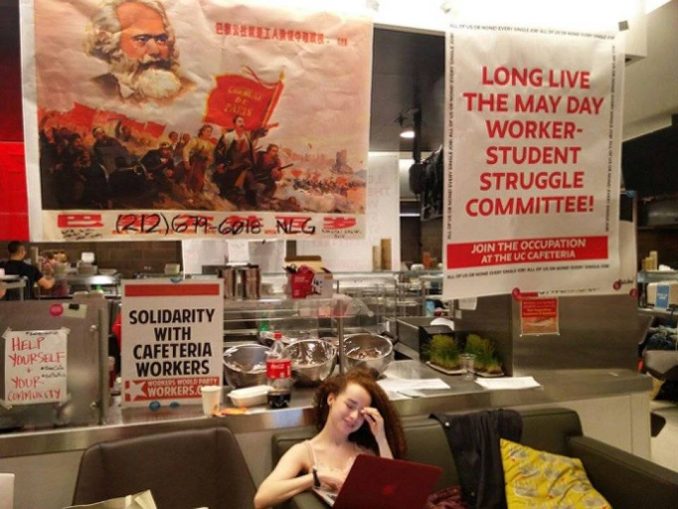 Since May 1, there has been an ongoing occupation of the cafeteria at The New School in New York City. Students and workers there seized the cafeteria on May Day and have been holding it in protest of the university’s attempt to layoff of 35 members of UNITE HERE Local 100. The school wants to replace these union workers — all of whom are Black and Brown workers — with nonunion or student workers or “rehire” the workers — with no health benefits or pension plans

The New School is traditionally known as a left-leaning school, so the anti-worker administrations plans have reverberated in the student body. The Communist Student Group organized the cafeteria occupation, with more than 50 multinational and multigender students currently holding the space and asking for support at #OccupyTNS.

Students are demanding every cafeteria worker’s job be saved, at higher wages, along with benefits, pensions and tuition vouchers for workers and their families. Other demands include resignations of key New School management, worker-student control of the cafeteria management, and full reimbursement of workers’ wages withheld during the occupation.

The Student Employees at the New School-United Auto Workers (SENS-UAW) have declared a strike for May 8. Beginning at 10 a.m., a picket line is set for 63rd St. and Fifth Ave.

SENS-UAW has also announced that the occupied cafeteria will begin to function as a strike kitchen on May 8. In addition to food and coffee, the cafeteria space will have general assembly meetings, committee reports, civil disobedience workshops, and training for street medics and demonstration marshals.

Teamsters Local 1205 has informed the university administration that its members will not cross the SENS-UAW picket lines.