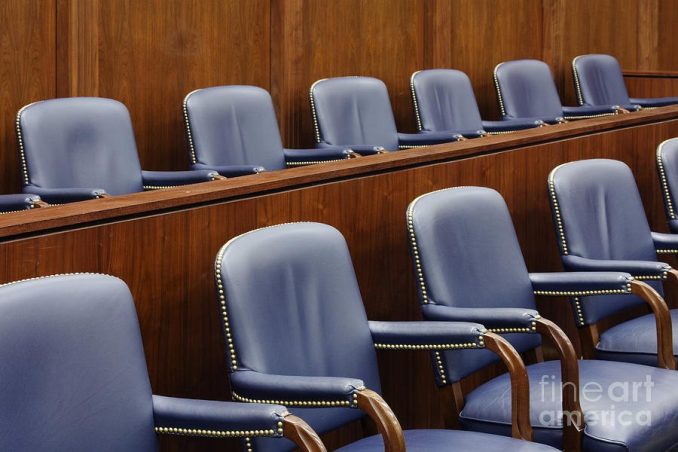 I had arrived at the Frank Murphy Hall of “Justice” before 7:30 a.m. and drove around the block several times, expecting to see a dedicated parking area for people visiting the courthouse, but there was none. Only metered street parking (with a two-hour maximum) and private pay lots. I ended up parking at Greektown Casino for $10 because they took credit cards, and I hadn’t brought enough cash for a pay lot.

I went inside, submitted to the court’s security screening and checked in at the jury pool room. By that time I was almost half an hour late, but nobody seemed to care. Someone made a reminder announcement that jurors could not use street parking due to the two-hour maximum, and they recommended the local privatized pay lots.

Then we sat and waited for about half an hour. Some jurors did crossword puzzles. Some read magazines. Cell phones were not permitted in the building, and I was tired from having to get up earlier than usual, so I took a nap.

I was awakened by the TV screens in the room playing a short clip describing the purpose of a jury and propagandizing the importance of such. Something about how juries are a critical component of “our democracy” (eyeroll). The message also stressed the importance of remaining “unbiased” during the trial process (another eyeroll).

Next, Judge Mark Slavens entered the room and addressed the prospective jurors. He asked anyone who was a military veteran to stand and told us to applaud for them. He pontificated at length about “our rights” and how these “brave” men and women worked so hard to defend these rights.

I wanted so badly to ask him if oil was a freedom, but the threat of catching a contempt charge outweighed my desire to be snarky. The judge also remarked about what a great privilege and responsibility it was to serve on a jury. I cast a knowing glance at the person sitting nearest me. To my surprise, he returned the same look.

Instantly I knew I wasn’t the only one there who found this whole thing extremely icky. The person I exchanged glances with asked, rhetorically and under his breath, why it was a privilege to send someone to prison. Whenever my faith in the working class wavers, moments like that restore it.

Threat of prison and prison labor

Next, we were summoned in groups to courtrooms. I was called to none other than Judge Slavens’ courtroom. We waited outside for several minutes. I watched defendants being shuffled in and out of courtrooms. I noticed a stark disparity in the skin color of the attorneys and judges compared to that of the defendants. This comes as no surprise to many, but I feel the need to point it out due to just how much the U.S. justice system resembles slavery.

The resemblance is not superficial, either. That is its primary function. The implicit threat of prison labor in the near future for the people I saw weighed heavily on my mind.

Behind the doors, prosecutors were doing everything they could to get defendants to confess to breaking laws before bringing in jurors. Why risk 25 years if the prosecutor and the judge are offering five years if you’ll just confess?

We were eventually brought into the courtroom and asked to take a seat. Judge Slavens explained to us that we would no longer be needed because the defendant took a plea deal. Apparently we had served our purpose — as a nameless group of people the prosecutor could hold over the head of the defendant and use to threaten them with longer terms of forced labor unless they confessed to an alleged offense.

We were sent back to the jury pool room for dismissal. The movie “Holes” was playing on the TVs, a fact I found simultaneously hilarious and horrifying. I speculated out loud that maybe the choice of film was meant to trivialize the issue of prison labor, because it portrays prison labor as the exception rather than the rule.

I left wishing I had been able to do something other than be an implicit threat to be leveraged by a prosecutor. Had I been able to actually deliver a verdict, the court would have deeply regretted summoning me.

As I drove home, I passed some prisoners cleaning litter on the side of the highway. Why read dystopian novels when you can just look out the window?

We need to put a stop to this horrible system as soon as possible. Do not believe snakes like Slavens when they say this country “is the best system” that exists. There are better ways.

Tear down the walls! Smash racism! Fight for socialism!