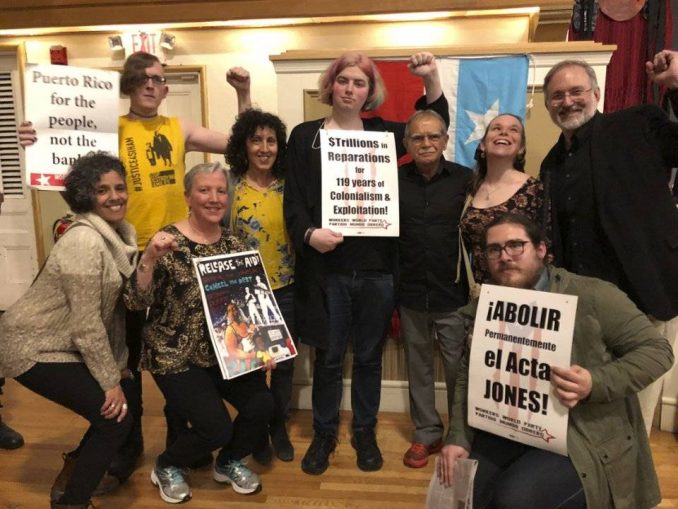 Boston — Puerto Rican activists, freedom fighters and supporters gathered here on April 28 in the Villa Victoria Center for the Arts to welcome freedom fighter Oscar López Rivera, released from a U.S. prison in 2016 after almost 36 years. A delegation from Workers World Party-Boston was among those greeting this heroic freedom fighter.

Villa Victoria has been the heart of the Puerto Rican diaspora in Boston since 1968, when a struggle stopped the city of Boston from bulldozing the apartment complex in the South End where the diaspora was concentrated. This victory gave the area its current name and led to the establishment of the Villa Victoria Center for the Arts to encourage cultural development in the community.

Fittingly, the first cultural performance of the night consisted of two poems by “poet laureate of Villa Victoria” Pedro “Flako” Cruz. The night ended with a performance by local hip hop group The Foundation Movement, who credited the Villa Victoria Center for the Arts as the place where they met.

Banners decorating the walls called for the release of all political prisoners, prominently featuring Black liberation fighter Mumia Abu-Jamal and Native freedom fighter Leonard Peltier. Kazi Toure, a former political prisoner and longtime leader of the Jericho Movement, introduced Oscar, whom he had met while the two were in Leavenworth.

Oscar stated that he owed his freedom to the support and solidarity he had received while in prison. He highlighted the many Puerto Rican political prisoners who had been freed, stating that the Puerto Rican people should feel proud of this achievement. He also called for supporters on the outside to express their solidarity and love with political prisoners still behind the walls.

Speaking on the imprisonment of Ana Belén Montes, a former U.S. intelligence analyst who was convicted of giving secrets to the Cuban government, Oscar emphasized: “The United States government is one that cannot do anything but provoke hatred and fear. And it is that hatred and fear that is used against Cuba. And it is used for countries like Syria and for every nation that it cannot control, from the Rio Grande all the way to Tierra del Fuego — any place in the world that it cannot control.

Ending on a message of hope, Oscar stated, “We should think of the world as one. We should see the world for its potential. We should do everything to make sure that we live in harmony among ourselves and with love in our hearts and to make this planet one that will guarantee every future generation lives in peace and in dignity, and lives not to destroy life but to enjoy life.”