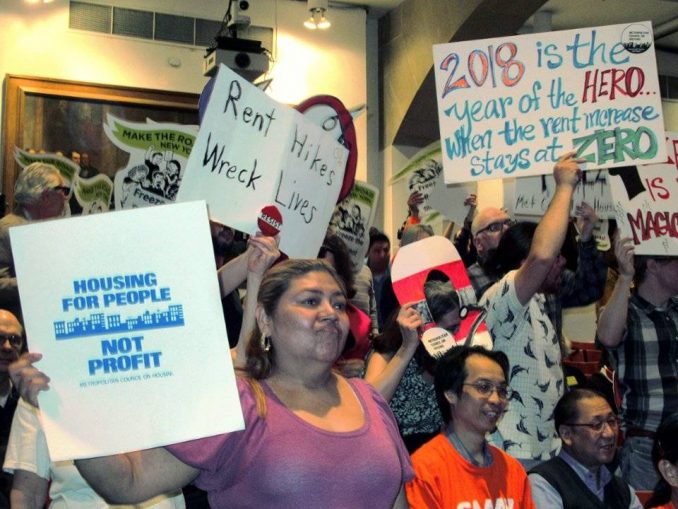 Tenants are demanding a rent freeze.

New York — Hundreds of angry tenants drowned out members of the Rent Guidelines Board at an April 26 meeting at Manhattan’s Cooper Union Hall. Demanding a rent freeze, the crowd yelled, “If we don’t get it, shut it down!”

The militant rally with loud chanting by tenant groups, public housing recipients and community organizations took place at the auditorium’s entrance. They prevented the hearing from starting on time.

The board meets annually to set rent increases for the city’s 1 million rent-stabilized apartments, which house about 2 million people. Since 2013, tenant pressure has exerted some control on landlord greed, even winning rent freezes for one-year leases for two years and keeping increases fairly low. This year, organized tenants, many of them Spanish-speaking Latinx immigrants and low-wage workers, demanded a rent freeze once again.

Over 10 tenants’ rights organizations mobilized to intervene, including CASA, Metropolitan Council on Housing, Real Rent Reform, Northern Manhattan Is Not for Sale!, Good Old Lower East Side, Make the Road New York! and others from the Bronx, Brooklyn and Manhattan.

But the landlords and big real estate interests had another agenda. They sought a 4 percent raise for one-year leases and a 7 percent increase for two-year leases. The board, which is heavily weighted toward realtors, adopted a preliminary resolution by a 5-4 vote, which would allow for up to 2.75 percent hikes for one-year leases and up to 3.75 percent for two-year leases, to take effect Oct. 1. If these rates are made permanent in the final vote on June 26, the board would be handing landlords the highest rent hikes in five years.

Tenants loudly denounced the board’s vote. Standing, they yelled: “Shame! Shame! Shame!” and “Fight! Fight! Fight!” They called out, “Shut it down!” Anne Pruden, a Workers World activist from Brooklyn, reported that the tenants “raised hell, disrupted and shut down the hearing.” It was over.

Tenants are organizing their next steps. They will speak out at the board’s five hearings in June and at its session at the end of that month when the board’s final vote is taken. They must mobilize; they have no alternative. Many NYC residents live on fixed incomes, have low-earning, minimum-wage jobs and must feed their families. The cost of living is soaring, but incomes are not.

A March for Tenants’ Rights and an End to Homelessness is being organized for June 14 in Bryant Park by Real Rent Reform, a tenant, community and labor coalition. A major target is Gov. Andrew Cuomo, who has prioritized allocating subsidies to billionaire developers while ignoring the crisis in private and public housing for the city’s multinational working class, elderly and disabled populations.

Met Council reports that more than half of New Yorkers pay over 30 percent of their income on rent. The lack of affordable housing exacerbates the crisis of homelessness, now at the highest level since the Great Depression of the 1930s. Over 63,343 homeless people live in city shelters, including 23,314 children — a number 82 percent higher than 10 years ago. Families comprise three-quarters of those living in shelters, says the Coalition for the Homeless. Thousands more, many suffering from multiple health problems, sleep on the streets or on subways.

Income inequality and racist discrimination result in disproportionate numbers of people of color being included among the homeless: 58 percent of shelter residents are African American and 31 percent are Latinx. These populations are among the city’s lowest-paid workers.

Every day, greedy landlords enforce evictions of people who don’t have attorneys to fight the landlords’ Park Avenue law firms. In addition to job loss and low wages contributing to homelessness, tenants often must flee overcrowded or unsafe housing conditions and domestic violence — with nowhere to go.

The struggle for affordable housing should be part of every progressive agenda. Housing is a right!