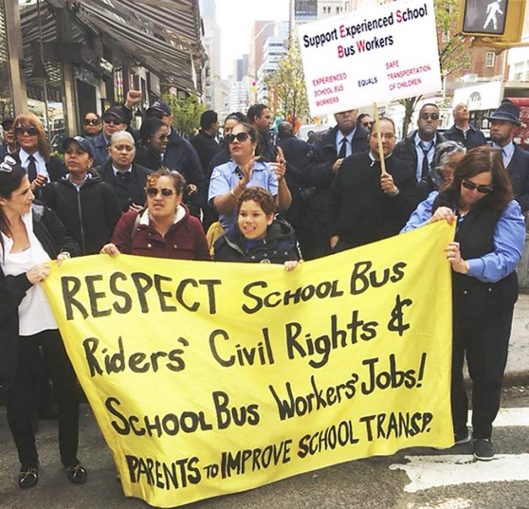 The contracts, between the New York City Department of Education and private companies for fall 2018 to summer 2023, involve routes for pre-kindergarten and early intervention students with disabilities.

If EPP is not enforced, companies can deviate from the labor contract pattern, reducing benefits and wages while ignoring citywide seniority. This can lead to low standards, exploitation and worker turnover, which is bad for the children. The companies hire people who are desperate for jobs, while expert drivers and matrons stay unemployed.

Protesters contend this has occurred in route contracts that the DOE has previously awarded to non-EPP companies, despite a determined 2013 strike.

People rallied in two shifts of about 50 people each, starting at noon, some arriving in yellow school buses. They gathered across from the New York State Supreme Court where a court hearing was held at 2 p.m. on the status of the EPP in contracts. Forty EPP supporters went inside, but the courtroom lacked enough seats for all of them.

Seventeen school bus companies have sued to try to remove the protective provisions from the contracts. A federal court denied the companies, but a state court granted a temporary injunction in their favor. Bidding on driver routes is now “postponed until further notice.”

Parents to Improve School Transportation (PIST NYC) submitted an affidavit to the court testifying that job security and an attractive benefits package for the workers translates to stability plus safety for the children. The PIST document emphasized that the children have a civil right to special education transportation, which is enhanced by having an experienced crew on each vehicle.

The judge heard oral arguments from both sides, and is expected to issue a written decision, with no date specified as of April 24.

Other school bus battles are heating up in Georgia and California. DeKalb County, Ga., drivers, who have no union, staged an informal sickout in April to protest conditions and low pay. Eight participants were fired by the school district, but are fighting back with support from the Industrial Workers of the World in that region. To support them, see tinyurl.com/ya53ufjh.

The writer is a founder of PIST NYC. Other parents as well as teachers in MORE-UFT who were present at the rally contributed to this article.