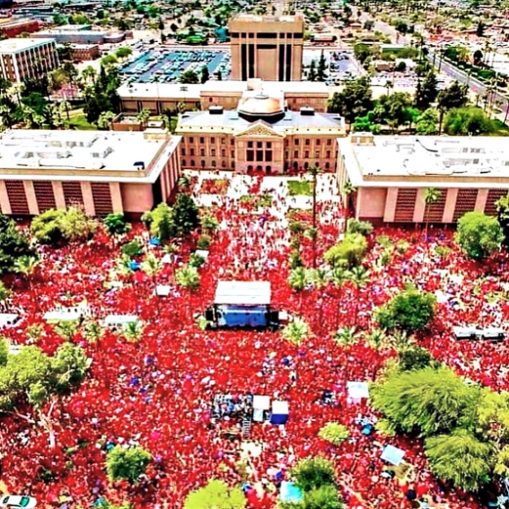 The spreading education workers’ struggle is ablaze in Arizona. On Thursday, April 26, an estimated 75,000 public school employees refused to report to work and began a historic walkout. Helicopter photos showed a red river of people advancing through the streets in Phoenix toward the Capitol.

On Friday, the school workers were back, rallying in the tens of thousands. Speakers in Phoenix included representatives of the Arizona Education Association, Arizona Educators United, students, the Latinx community and parent-teacher organizations. The protests continued on Monday, April 30, and on Tuesday, May 1–International Workers’ Day.

School workers are demanding restoration in public funding to the 2008 level for devastated schools, competitive and lasting salary increases for all education workers and no new tax cuts for the rich until per-pupil spending is at the national average.

Just before the walkout date, Arizona Gov. Doug Ducey signed a tax break for coal mining companies that will cut state revenues by $12 to $30 million a year.

According to AEA President Joe Thomas, 78 percent of its teachers voted for the action. This is the first statewide education workers strike ever in Arizona, and potentially the largest U.S. education walkout ever, as 820,000 of the state’s 1.1 million students could be affected. (tinyurl.com/ycpz3k6f)

Arizona teachers and school support staff in Arizona paid close attention to the West Virginia education strike in February and began taking matters into their own hands in early March. After a private Facebook page, “West Virginia Public Employees UNITED,” was used to organize actions and communicate before, during and after the strike, Arizona school employees started their own grassroots-led Facebook group called Arizona Educators United.

According to Labor Notes, “30,000 people joined [AEU] within the first 10 days,” with 45,000 members by mid-April. In solidarity, supporters of AEU not working directly for the public school system also set up “Arizona Parents and Allies United” on Facebook.

Noah Karvelis, a K-8 music teacher in Phoenix and organizer for AEU, created the #RedForEd movement on social media to unite education workers throughout the state. Red was the color worn by West Virginia school workers during their 1990 and their most recent strike. It has traditionally been the chosen color of most working-class as well as socialist struggles internationally.

The first #RedForEd event, organized by AEU, was March 7. Teachers, paraprofessionals, classroom aides, school bus drivers, school cafeteria employees, secretaries and custodians all over the state sported red clothing. As they made “selfies,” posting pictures on social media explaining why they were fighting for public education, #RedForEd began to go viral.

Arizona education workers continued to wear red every Wednesday as school workers began to strike in Oklahoma and walked out in Kentucky. In Arizona, teachers and school support workers quickly began holding informational pickets, walk-ins and rallies at the Capitol. They mobilized a huge protest against reactionary Gov. Ducey during his weekly hate-filled radio show.

Ducey has made it clear that he is against any type of action that defends public education. Despite crumbling public schools and miserably crowded classrooms, he used the fake argument that if schools shut down as a result of a walkout, “our kids are the ones who lose out.” (Arizona Family, April 19) Ducey is the former CEO of Cold Stone Creamery and a previous board member of a union-busting outfit misnamed “Teach for America.”

Why teachers are walking out

AEU and AEA are also fighting for competitive pay for all education employees and that the salary increase be a permanent increase, as opposed to just a one-time bonus.

Education advocates want public school funding raised back to its 2008 level.  A recent study by the Joint Legislative Budget Committee shows that Arizona spends roughly $924 less per pupil in inflation-adjusted dollars today than it did 10 years ago. While the Arizona Legislature was still in session, AEU focused its attention on combating a reactionary school voucher bill, SB 1467, which would take money from public schools and give them to private schools. In the West Virginia victory, strikers defeated charter school and school voucher bills.

After feeling the heat from the #RedForEd movement, Gov. Ducey announced a “plan” to raise pay to 20 percent by the year 2020 and increase public education funding by $371 million by 2023. But Arizona education workers saw this proposal as too little, too late — an insincere offer that does nothing to improve pay for school support staff. Instead, the reactionary governor’s weak offer appears to be just another tactic to divide the working class. Teachers marching on April 26 also said they emphatically refused raises that would come at the cost of cutting social services for poor, Latinx or disabled students. (Payday Report, April 26)

Finally, AEU and AEA activists are making it clear they do not want to see any more tax breaks for the rich. While state funding for Arizona students and public schools has steadily decreased in the last ten years, tax breaks for Arizona’s top 1% have increased. Education workers in West Virginia, Oklahoma and Kentucky correctly took aim at the energy bosses and extraction industries in their states as the root of the budget problems. Arizona school employees are also directing their anger at the state’s big business.

The education workers’ walkout comes after decades of struggle by Latinx teachers and supporters against racially discriminatory funding of school districts in their communities. In 2010, the Arizona State Legislature passed a law against teaching Mexican-American history in the Tucson public school system. This was only defeated in December 2017 when a federal judge ruled the law unconstitutional. According to Payday Report, the state’s student population is 45 percent Latinx, and over half of the student population is children of color.

Arizona has a brutal history of racism, massacre and exploitation against Indigenous nations and Latinx people, who have faced centuries of settler colonialism. The state did not recognize Dr. Martin Luther King Jr.’s birthday as a federal holiday until 1992, only then bowing to the economic pressure of a massive peoples’ boycott. Another boycott of Arizona was initiated after the state Senate passed SB 1070, representing and endorsing the virulently anti-im/migrant actions of racist Sheriff Joe Arpaio of Maricopa County.

Support for the education workers’ strike was emphatic in rural San Luis, Ariz., on April 26, when teachers marched and gathered with students and community members at the Cesar Chavez Cultural Center. Chanting “Fund our schools” and clanging cowbells, they hung a #RedForEd placard on the statue of farm workers union leader Chavez. (Phoenix New Times, April 27)

The strikes and walkouts, which started in West Virginia and spread to Oklahoma, Kentucky and Arizona, are primarily being waged in “right-to-work” (for less!) states where work stoppages of any sort are illegal. It’s important to acknowledge the fact that these struggles are majority-women, rank-and-file-led.

There are rumblings that educator work actions may soon begin in Arkansas, Mississippi and South Carolina. Many of the education workers in these states undoubtedly voted for the racist Republicans, but the walk-ins, walk-outs and outright strikes are a clear action against the right-wing agenda set by reactionaries backing privatization and profit.

Arizona Gov. Ducey is a Republican, like the governors of West Virginia, Oklahoma and Kentucky who attempted to break the public education workers’ actions. But Democratic governors have also been antagonistic toward public sector unions, despite the fact that the union bureaucracy donates millions of dollars to that party of capitalism each election cycle through political action committees.

The capitalist Democratic Party is no alternative, typically showing its true anti-union colors in areas where it is the majority party, in an attempt to contain and stop militant mobilizations. New York Gov. Andrew Cuomo has called teachers’ unions a “selfish industry.” (New York Daily News, Jan. 23, 2015)

Education workers in so-called “blue states,” such as Colorado and Wisconsin, have already participated in rebellious walkouts. Three thousand teaching and research assistants struck at Columbia University in New York City on April 24 over the university’s refusal to even participate in negotiating a contract.

Teachers in Puerto Rico, led by the courageous Puerto Rico Teachers Federation (FMPR), have struck against colonialism: the closing of public schools, speeding privatization through charter schools and racist gutting of public services in order to service big banking debt. FMPR has a history of standing up to U.S. imperialist big business. (See “FMPR: ‘A fighting instrument’,” Workers World, April 19.)

That education workers’ strikes in the U.S. have inspired working people throughout the globe is a nightmare for the billionaire class. Rank-and-file education workers are realizing what a mighty power they have when they fight collectively.

Otis Grotewohl is a WWP member and union activist in West Virginia who was involved there in the education workers’ strike and is monitoring other education strikes.