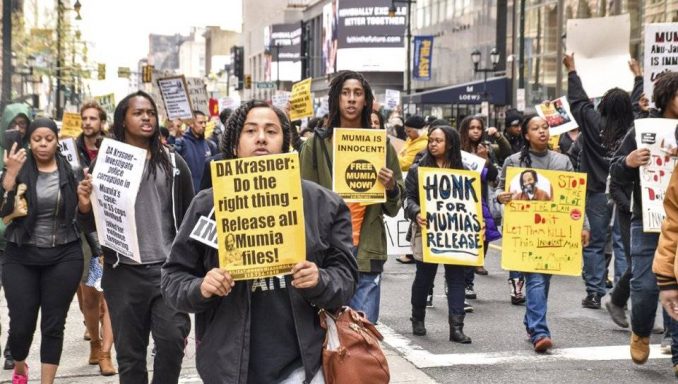 Philadelphia, April 30 — Despite District Attorney Larry Krasner’s campaign promises to address decades of injustice in the Philadelphia DA’s office, it was evident at a hearing for Mumia Abu-Jamal today that the “Mumia exception” — where legal precedent applies to everyone but Mumia – is still the rule.

The hearing was the continuation of more than a year of court sessions before Philadelphia Common Pleas Court Judge Leon Tucker. They involve a petition by Abu-Jamal based on a 2016 U.S. Supreme Court decision, Williams vs. Pennsylvania, that found it unconstitutional for Pennsylvania Supreme Court Justice Ronald Castille to rule on an appeal case in which he had played a significant role as Philadelphia DA. In effect, Castille would have ruled on his own earlier conduct.

At a hearing for Abu-Jamal’s appeal on Jan. 17, Assistant DA Tracey Kavanagh had sought a 60-day extension, stating that Krasner’s office wanted to review the outstanding Williams’ cases, of which Abu-Jamal’s is one, in order to standardize their approach to all cases relating to the SCOTUS decision.

That hearing was initially intended to include testimony on a 1990 memo from former Assistant DA Gaele McLaughlin Barthold responding to Castille’s request for status updates on capital cases, including Abu-Jamal’s.

When the 60-day extension expired on March 26, the DA sought more time for a newly hired paralegal, Ryden Nelson, to conduct an “exhaustive search” of all files related to the capital cases listed in Barthold’s memo.

Three days before the April 30 hearing, DA Kavanagh issued a letter to Judge Tucker claiming that their “exhaustive search” had not found the missing Castille memo.  It concluded: “Although Mr. Castille was the District Attorney when defendant’s (Abu-Jamal’s) direct appeal was pending and then presided as the Justice/Chief Justice over defendant’s PCRA appeals in the Pennsylvania Supreme Court, it is the Commonwealth’s position that he did not have the requisite ‘significant, personal involvement’ in a ‘critical decision’ in this case to give rise to a substantive due process violation as set forth in Williams.”

Abu-Jamal’s attorneys, Judith Ritter and Sam Spital from the NAACP Legal Defense Fund, challenged the Assistant DA’s claims, noting there had been no indication that paralegal Nelson had reviewed Castille’s personal file on the case.  Spital raised that the Commonwealth’s failure to produce the relevant memo favorable to the defense should warrant a finding of “adverse inference” in favor of Abu-Jamal.

Judge Tucker granted the defense the right to depose Barthold regarding the missing memo and to file an amendment to their original petition. The next in-court hearing is scheduled for Aug. 30.

It was also apparent that public pressure from the Fraternal Order of Police to fill the court and protest outside Abu-Jamal’s hearing may have influenced the DA’s decision. The Philadelphia Inquirer posted an op-ed piece on April 26 by Maureen Faulkner, widow of police officer Daniel Faulkner, whom Abu-Jamal was convicted of murdering.  Abu-Jamal has steadfastly maintained his innocence.

Faulkner openly challenged Krasner “to fight to keep” Abu-Jamal in prison and claimed “Gov. Wolf and Krasner have politicized the use of capital punishment and life sentences in Pennsylvania.” The opinion piece ended with: “We ask Krasner to set aside his desire for social and legal reconstruction and aggressively perform the duties of the job he swore to perform, and fight for all victims of murder and violent crime. If you agree, please call Krasner and respectfully advise him you expect the same thing.”

Using a long defunct Facebook page, “Justice for Danny,” the Fraternal Order of Police called for a demonstration outside the court on April 30 and for Faulkner supporters to fill the seats starting at 8 a.m. Calls by Abu-Jamal supporters to “Pack the Court to Free Mumia,” which also involved an outside rally scheduled for 8 a.m., had circulated for weeks through fliers and social media.

The FOP’s evident attempt to intimidate Abu-Jamal supporters may have backfired, as hundreds of them turned out today starting at 7:30 a.m., demonstrating outside and standing in line for over an hour to get seats in the small courtroom.  Despite those already waiting, Faulkner and about a dozen FOP supporters, who arrived around 8:30 a.m., were given an entire row, while over 40 of Abu-Jamal’s supporters were forced to squeeze into the remaining seats.

Sitting in a section of the courtroom reserved for media, this reporter witnessed the community liaison staff person for the DA’s office make a point of assuring some of the FOP members sitting in the row behind the media that they had nothing to worry about.  He specifically pointed out the concluding paragraph of Kavanagh’s letter.

Friends of millionaires and politicians get ‘extraordinary relief’

In the weeks leading up to Abu-Jamal’s hearing, DA Krasner called for Philadelphia rapper Meek Mill to get a new trial because the cop who testified against him was known to lie on the witness stand.  Under extensive pressure from Mill’s supporters — who include millionaire entertainers, sports team owners, Pennsylvania Gov. Wolf and former DA Ed Rendell — the Pennsylvania Supreme Court granted “extraordinary relief” for Mill and released him on April 24, Abu-Jamal’s birthday.

Although there is ample evidence that Abu-Jamal’s case was rife with police corruption, coerced witnesses, missing evidence and now a missing memo, DA Krasner bent to pressure from above — in this case the media and the FOP — and failed to do the right thing.

After the court adjourned, hundreds rallied outside the courthouse and then marched through Center City to the DA’s office, vowing to continue the pressure to win justice for Mumia!

Video of the protest can be found at tinyurl.com/y92jeezn.