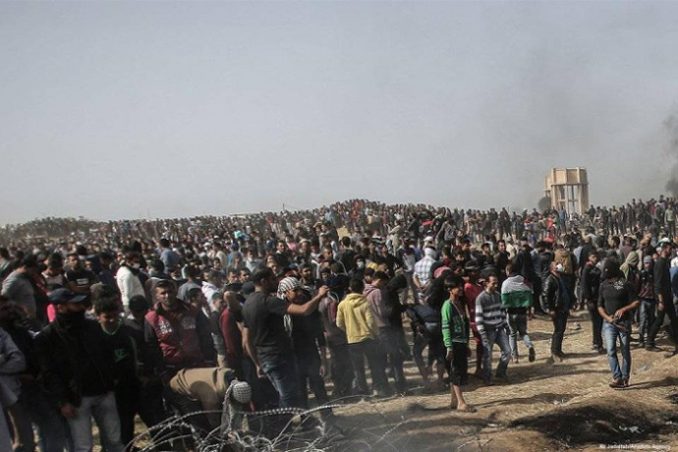 Thousands of Palestinians assemble along the Gaza-Israel border during the ‘Great March of Return’ on April 13.

Heroic demonstrations against the Israeli occupation of Gaza continued on April 28 for the fifth week. Every Friday since March 30, the Great March of Return has brought thousands of demonstrators, armed only with their unbreakable resolve, to the militarized fence surrounding the Palestinian enclave.

The demonstrations are scheduled to continue until May 15, the day of the “Nakba” or “Catastrophe,” when hundreds of thousands of Palestinians were forced to flee their homes in the 1948 war that established the state of Israel.

According to Reuters, three Palestinians were killed and another 600 wounded by the Israeli Defense Force on the last Friday. This brings the total casualties since the beginning of the Great March of Return to 42 Palestinians dead and over 5,000 wounded. Israel has deployed snipers and tear gas against the unarmed demonstrators since the demonstrations began.

Conditions in Gaza have been described as “the world’s largest open-air prison,” as Israeli occupation forces have blockaded the small strip by land and sea since 2007, restricting the supply of key necessities, including medicine. The territory, which depends on Israeli-controlled power plants for electricity, receives only about four hours of energy a day.

The Great March of Return has demanded not only an end to the siege conditions experienced in Gaza, but the right of all Palestinians to return to their homes and villages in what is now Israeli-controlled territory. The images of thousands of unarmed protesters confronting occupation soldiers week after week in defiance of the violence used against them is reminiscent of the struggle against South African apartheid.

Israeli authorities have attempted to lay the blame for the horrific scenes coming out of Gaza at the feet of Hamas, the Palestinian organization that controls the territory. But it was the Israeli state that ordered snipers to fire on unarmed demonstrators, authorized the use of live ammunitions and tear gas, and intentionally deprived the people of Gaza of electricity and medicine. It was also the Zionist project that forced Palestinians from their homes in the first place, and has continued to expand deeper and deeper into Palestinian territory.

Progressive people in the United State must unite not only to condemn the crimes of the Israeli government, but also to end the complicity of the U.S. government in those crimes. In addition to weapons sales and billions in yearly military aid, the U.S. has long protected Israel from international consequences, for example, by using its veto power in the United Nations Security Council to block an investigation into Palestinian deaths, days after the Great March of Return began.

Israel returns the favor by acting as the Pentagon’s attack dog against countries in the area that refuse to surrender their sovereignty, like Syria, Iran and Yemen.

Through military aid, diplomatic support and economic ties, the U.S. has enabled the ongoing genocide of the Palestinian people. Washington has dropped all pretenses of neutrality since the election of Donald Trump, who in February announced he would move the U.S. Embassy to Jerusalem.

On April 13, the same day the IDF gunned down unarmed protesters, the imperialist militaries of the U.S., Britain and France launched a total of 105 missiles at Damascus to “punish” the Syrian government for alleged chemical attacks. In truth, these missiles made it impossible for international investigators who arrived the next day to determine what had happened.

But the imperialists were silent when Israel used white phosphorus against Gaza in 2009, and of course, there has been no talk now from the capitalist politicians of any “humanitarian intervention” to protect the Palestinian people. The hypocrisy of the U.S. government is rarely so blatantly exposed as when it remains silent about the crimes of Israel.

As the Palestinian people continue their heroic resistance against Zionist occupation, it is the duty of progressives living in the belly of the beast not only to continue to draw attention to their struggle, but to demand an end to U.S. support for Israeli apartheid.