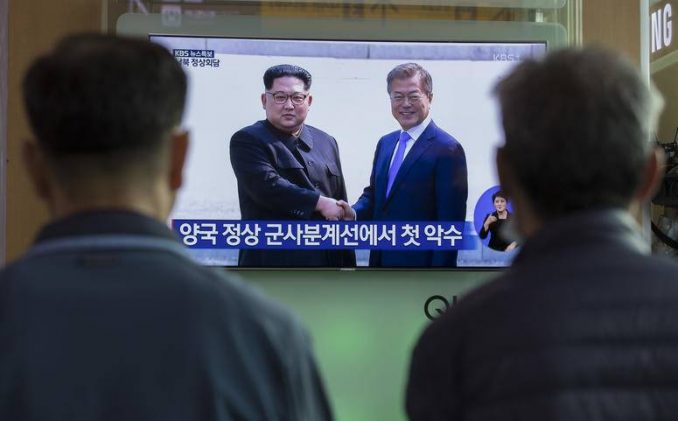 A historic meeting between the DPRK’s Kim Jong Un and Moon Jae-in.

With the leaders of both the Democratic People’s Republic of Korea and South Korea having declared they are ready to end the state of war between the two that has existed since 1950, the ball is now in the U.S. court.

Donald Trump has accepted an invitation to meet with Kim Jong Un, leader of the DPRK, but no date has been set. Meanwhile, Trump has brought into his administration two very extreme warhawks, John Bolton and Mike Pompeo. Will they set the policy, or did he bring them in to keep an eye on them? With Trump, it’s hard to know.

The real problem, of course, is not between the two Koreas. The problem is the continuing U.S. military occupation of South Korea, which has driven a wedge between north and south since 1945. A peace treaty between the two would undermine the excuse given by Washington for the continued U.S. occupation: the claim that the Koreans in the south need to be defended against their fellow Koreans in the north.

The desire of most South Koreans to break down these barriers was clearly seen during the Winter Olympics, when they gave an ecstatic welcome to the joint North-South Olympic team marching under one flag. In the stands, only U.S. Vice President Mike Pence showed extreme hostility to this development, slouched down in his seat and not even standing for the South Korean national anthem.

For years, ever since the U.S. flew Syngman Rhee, who had been living in the United States for decades, back to Seoul and installed him as the first president of the newly created nation of South Korea, Washington has been used to calling the shots there.

Growth of people’s movement in south

No more. A people’s movement in the south has survived and grown stronger in the long struggle against U.S.-supported, brutal military dictatorships and corrupt politicians in the pockets of the chaebol, the large industrial conglomerates run by a few wealthy families.

For years South Korean unions have militantly and tenaciously fought for workers’ rights. As recently as 2015, hundreds of police stormed the headquarters of the Korean Public Service and Transport Workers’ Union during a strike by truckers. But the reactionary government that ordered the attack is now gone, and its president, Park Geun-hye — the daughter of a general who had earlier ruled the country through an open military dictatorship — has been imprisoned for corruption.

To achieve the downfall of the Park regime, south Koreans demonstrated every weekend for a solid year. At times, the number of people participating in these rallies exceeded a million.

It is this kind of disciplined and militant organization on a mass level that has changed the political landscape in the south and laid the basis for a historic meeting between the DPRK’s Kim Jong Un and Moon Jae-in, now the leader in the south. Their recently announced agreement to end the formal state of war that has existed since 1950, and their symbolic act — when both stepped across the border line at Panmunjom that divides Korea — must have brought tears to the eyes of so many Koreans who have lived with the terrible sorrow of families divided for generations.

DPRK refuses to bow down

What has brought about this new relationship? In addition to the strength of the people’s movement in the south, credit must go to the steadfastness of the people and leaders of the DPRK. They have refused to knuckle under despite years and years of U.S. sanctions and war threats, with annual war “games” taking place on their borders that simulated an invasion and the “decapitation” of their leaders.

Instead of folding, the leadership put their scientists to work and developed a nuclear defense for the country — an achievement that astonished the imperialists, who have stockpiled thousands of these fearsome weapons precisely in order to subjugate the rest of the world to their will.

With this in hand, the leaders of the DPRK and South Korea are now ready to sit down and discuss with the U.S. how to end the war crisis that has existed for so long. It’s the duty of those of us in the U.S. to struggle to get the ruling class here to accept the reality and abandon their efforts to sabotage the prospects for peace in Korea.