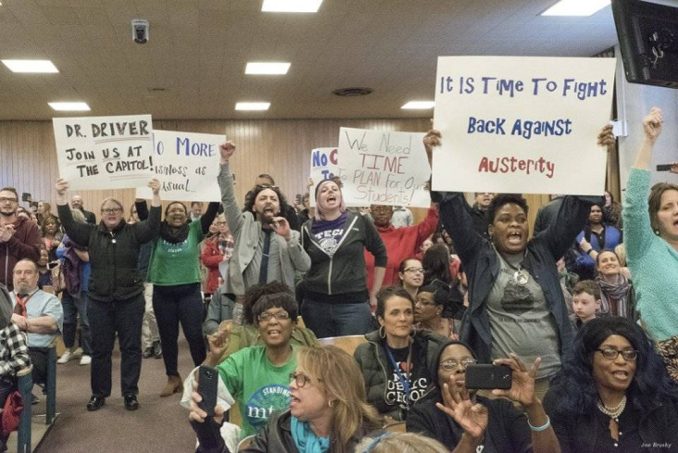 As a part of the international workers’ movement against austerity, educators in Wisconsin continue to fight back against Wall Street’s intent to destroy public education and unions.

Following the implementation of the 2011 Act 10 union-busting law, the Milwaukee Teachers Education Association’s leaders and members have adopted a social-justice or class-struggle union approach. The MTEA has especially been leading the fight to defend public education in Wisconsin.

In 2011, a right-wing, racist cabal took over the legislature and governor’s office. Since then, poor and working people in this Midwestern state especially have faced more intensive Jim Crow-type austerity. Black workers in Wisconsin, who have long experienced some of the worst conditions for people of African descent in the United States, are taking the brunt of the banks’ and their political servants’ vicious attacks.

Right-wing think tanks like the Milwaukee-based Bradley Foundation designed many of the anti-public education and union-busting models implemented in the Midwest. Now, the Trump administration (and Obama before him) is using them on a federal and even international level.

The MTEA and its allies in the Latinx community — Voces de la Frontera and Youth Empowered in the Struggle — among numerous other labor, community and student groups — are combating these models. They are employing creative and militant organizing tactics and strategies to resist austerity and to build people’s power in workplaces and the community.

Along with the K-12 public education struggles in Milwaukee and elsewhere in the state, student-workers in the University of Wisconsin system are also resisting Puerto Rico-style austerity through various protest actions.

Students, faculty and staff at UW Stevens Point are now fighting against a gutting of liberal and humanities programs at that campus. Last year, these direly needed programs were gutted at UW Superior. The Teaching Assistants Association-AFT at UW Madison is also engaged in numerous battles against the UW administration and the UW Regents that govern the system and are trying to impose cuts.

Milwaukee is a majority Black and Brown city. Since 2011, students in the Milwaukee Public School (MPS) system have been facing the largest public education cuts in state history. Students there also face a structural disparity in per-pupil funding when compared to their suburban counterparts.

The evisceration of residency rules for city workers and increasing debt service to the banks are creating even more funding challenges. Budget cuts have been passed on to educators in the classroom. Educators and students face crumbling buildings and a lack of necessary supplies.

School administrators have become part of the problem. They could be demanding an end to charter schools, which drain hundreds of millions annually from MPS. Instead of advocating for full funding, these administrators now propose an additional 5 percent, across-the-board cut for students and schools, and massive health care and benefits cuts that would be even more devastating. (mtea.weac.org)

The MTEA forces demanded an end to any cuts and put forth some of their program: Keep budget cuts away from schools! Time for teachers and educational assistants to meet the needs of their students! Quality affordable health care for all full-time education workers — including substitutes! Raises to attract and retain the education workers that students deserve!

Walk-ins and other protest actions at public schools across this city of 600,000 preceded the April 10 protest and these actions continue.

The MTEA is following up the school board meeting action with a mass informational picket on April 24 at MPS headquarters. Numerous labor-community organizations support this action, including the Wisconsin AFL-CIO, which sent out a “Stand in Solidarity with Milwaukee Education Workers!” email to its entire statewide list:

“MPS Administration has accepted and passed along years of budget cuts and austerity to Milwaukee Public School students and classrooms. Tattered textbooks, crowded classrooms, and shrinking art, music, and physical education programs are just a few of the consequences students and educators face thanks to Scott Walker’s unprecedented public education cuts. Enough is enough! See you on the picket line!” (wisaflcio.typepad.com)

The MTEA is also again supporting the May Day march sponsored by Voces de la Frontera and Youth Empowered in the Struggle, this year to be held in Waukesha, an area populated by many right-wing, racist politicians. (facebook.com/VocesdelaFronteraWI)