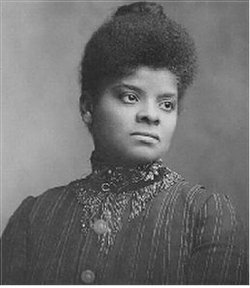 Anti-racist groups in Chicago came together April 22 to stand against the racists who gather annually at a large Confederate monument on Chicago’s South Side. About 50 people congregated at the gates that open up to the private Oak Woods Cemetery, which houses the National Park Service-owned “Confederate Mound.”

This cemetery housing the Mound — a 46-foot tall monument that the Greater Grand Crossing neighborhood’s mostly Black residents can see as they walk along Emmett Till Road — is also the final resting place of investigative journalist and anti-lynching advocate Ida B. Wells, Olympic hero Jesse Owens and former Chicago Mayor Harold Washington, among many others.

Smash White Supremacy Chicago (SWSC), a group of anti-racist individuals and organizations, presented two visual timelines at the cemetery gates. One traced the history of the Mound and statue, and the other outlined the life and work of Ida B. Wells.

Speakers from various groups talked about Wells’ legacy in Chicago and the role that white supremacy has played, and continues to play, in the shaping of our city. The closing of schools and mental health facilities, and home foreclosures in Black and Brown communities, were all identified as concrete manifestations of white supremacy.

After the timelines were presented, the group transitioned into a somber choir as they entered the cemetery to hold a memorial service for Wells. Her gravesite is marked by a humble stone piece, and is within eyesight of the tall Confederate monument.

Two community members spoke about the importance of organizing against white supremacy while honoring the organizers who came before us. One speaker read a poem by Langston Hughes and recounted the violence they experienced growing up in Memphis, Tenn., during the Jim Crow era. Another speaker presented a poem that ended with the lyric, “Our revolution is justified.” Many in the crowd shed tears as they placed flowers and candles at Wells’ grave.

Keeping Wells’ words in mind — “The way to right wrongs is to turn the light of truth upon them” — organizers felt the need to dispel the myths surrounding the Confederate monument. We understand that statues glorifying white supremacy have nothing to do with history, and everything to do with ongoing, state-sponsored racist terror. In 2009, the statue benefited from a federal stimulus of $250,000, at the same time that social services were being cut in the city’s most oppressed neighborhoods.

The Confederate Mound commemorates the deaths of more than 4,000 Confederate prisoners of war who died at Camp Douglas in Chicago. The “Sons of the Confederate Veterans” won’t tell you that these POWs only died because their government refused to include Black Union soldiers in prisoner exchanges, choosing instead to sell those captured into slavery.

The Sons claim that their memorial service is about heritage, not hate, but their tired lies weren’t able to fool the residents of Greater Grand Crossing, who remember fighting for the right to be buried in Oak Woods Cemetery.

While SWSC was present, the racists were too afraid to show their faces. They drove in and out of the cemetery without attempting interaction. Of course, they were protected by a sizable police presence for the entirety of their so-called memorial.

According to Greater Grand Crossing residents, the gatherings of previous years were often accompanied by a “military salute” — blanks fired off in unison — but we heard no celebratory gunfire today.