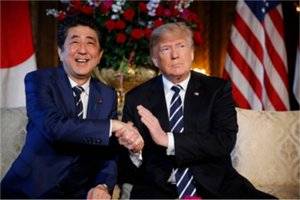 The symbolism of Shinzo Abe shaking hands with Donald Trump at his Mar-a-Lago estate on April 18 may be lost on most people in the United States, but it certainly resonated with Koreans.

Abe, the current prime minister of Japan, is the grandson of Nobosuke Kishi, the brutal ruler of the puppet state of Manchukuo. Some 80 percent of the people oppressed by Japan in Manchukuo, which imperial Japan set up in northeast China in the 1930s, were ethnic Koreans.

In 1910, Japan had invaded Korea and set up a harsh colonial rule, leading many Koreans to leave their homeland and settle in northeast China. They only too soon found themselves once again under the Japanese imperialists’ iron heel, with the establishment of Manchukuo.

One of those Koreans was Kim Il Sung, to become leader of the Korean struggle for socialism and liberation, who gained valuable military experience in the 1930s fighting the Japanese in Manchukuo as commander of the Third Division of a joint Chinese-Korean army. Later he would draw on that experience to fight the U.S. invaders to a standstill in the 1950-53 Korean War.

After Japan’s defeat in World War II, Kishi, the former overlord of Manchukuo, was imprisoned for three years for war crimes. But he was then released by the U.S. government because “they considered Kishi to be the best man to lead a post-war Japan in a pro-American direction. As such, he has been called ‘America’s Favorite War Criminal.’” (Japan Policy Research Institute)

With Abe’s rise to twice become prime minister of Japan, first in 2006 and again in 2012, the right-wing Kishi political dynasty was again in the saddle, with the blessings of the U.S. Within days of his meeting with Trump, Abe sent a ritual offering to the Yasukuni Shrine for the war dead, a symbol of imperial Japan’s military conquests in China and Korea.

Can it be forgotten that the U.S. and Japan were imperialist rivals in World War II? That countless young draftees on both sides were killed or maimed in that bloody struggle? The U.S. claimed it was to make the world “safe for democracy,” but it was really motivated by capitalist competition over markets and areas for exploitation.

The Japanese rulers surrendered after the Pentagon dropped two atomic bombs on Japan, killing more than 200,000 people, mostly civilians, in a few days. Of the dead, many were Koreans who had been forcibly dragooned to labor in the factories and mines of Hiroshima and Nagasaki, replacing Japanese workers drafted into the military.

The people of Korea, particularly those in the socialist north, are keenly aware of this tortured history. In contrast to the political dynasty of oppressors and exploiters that, thanks largely to U.S. imperialism, continues in Japan to this day, the north Koreans are fiercely proud of the continuity of anti-imperialist struggle embodied in their own leaders, beginning with the legendary Kim Il Sung and continuing with today’s Kim Jong Un.

Trump and his war hawks

Donald Trump is expected to meet soon with Kim, leader of the Democratic People’s Republic of Korea. What made such a development possible? It’s the determination of the DPRK to develop a nuclear defense against another U.S. invasion. No matter how you cut it, it is the DPRK’s nuclear arsenal that has compelled even the discussion of such a meeting by the White House.

In the mix are also the tremendous mass mobilizations for a solid year in south Korea that brought down the corrupt government of Park Geun-hye, daughter of a previous U.S.-approved military dictator. Her overthrow enabled a rapprochement between north and south that was clearly seen in the enormous public enthusiasm for a joint Korean team at the winter Olympics.

The Trump administration is packed with war hawks like CIA director Mike Pompeo, who is set to become Trump’s new secretary of state, and National Security Adviser John Bolton. They will press Trump to insist that the DPRK abandon its nukes with no guarantees against a U.S. attack. Bolton has even advocated initiating a war with the DPRK. (“The Legal Case for Striking North Korea First,” Wall Street Journal, Feb. 28)

Washington’s excuse for its continued military occupation of the south — 65 years after the Korean War — and its annual huge war “games” simulating an invasion of the north and “decapitation” of its leadership have always been that U.S. troops were there to defend the south against the north.

Clearly, the people in south Korea today don’t see it that way. They want an end to the state of war that still exists between north and south. They don’t want U.S. dictates continuing to divide a people whose shared civilization and culture go back thousands of years.

Progressives in the U.S. must not be passive spectators in this struggle. Continued U.S. military aggression against the DPRK could escalate into a catastrophe for the whole world. Ever since the U.S. imperialists divided Korea in 1945 and then fought a terrible, bloody war to keep it divided, our fate has been entwined with that of the Korean people.

We must say loud and clear: Hands off Korea! Sign a peace treaty and bring the troops home!