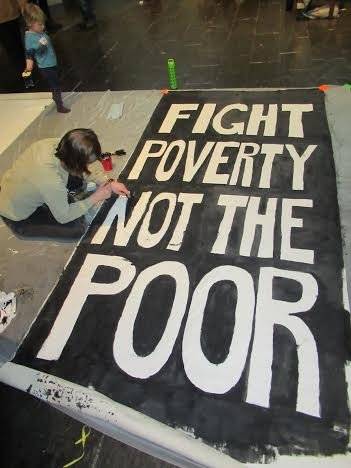 New York — Over a hundred people showed up to discuss and work on the growing Poor People’s Campaign on April 7 at Harlem’s Union Theological Center. A flier describing the PPC said, “50 years later, don’t just commemorate Dr. King’s work … complete it,” referring to the assassination of activist for social and economic justice, Dr. Martin Luther King Jr., in April 1968.

The Poor People’s Campaign focuses on three key demands of Dr. King — ending systemic racism, poverty and the war economy — while adding a call against ecological devastation. The PPC is launching 40 days of action this spring, from May 12 to June 21.

The April 7 Harlem session focused on nonviolent direct action training. The May actions will include civil disobedience and direct action meant to confront racism and other forms of discrimination, poverty, militarism and assaults on the environment.

The Poor People’s Campaign is co-chaired by the Rev. Dr. William Barber and the Rev. Dr. Liz Theoharis. Local sponsors for the meeting were the Labor-Religion Coalition of New York State, Repairers of the Breach and the Kairos Center.