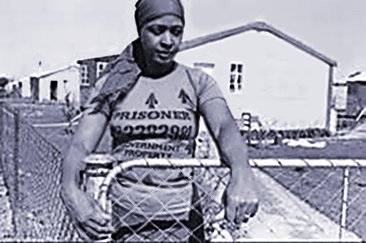 Winnie Mandela in Brandtford, 1976, where she was banished by the South African apartheid government.

This commentary was posted April 2 and downloaded from Prison Radio.

She was born in 1936 and named Nomzamo Winifred Madikizela, but the world would come to know this South African beauty as Winnie Mandela, the wife of African National Congress leader Nelson Mandela.

Their lives, their struggles for freedom, dignity and liberation from the racist ignominy known as apartheid, filled most of the 20th century. He, Nelson, labored under the harsh apartheid sun, breaking rocks in the prison yard while she, Winnie, labored under the white state’s total surveillance, while she raised their children.

While not widely known, her suffering included not only separation from her husband, but the cruel legality called “banning,” or South African censorship, that outlawed her speech — not allowing her to quote her husband’s words.

Winnie, a lifelong rebel, ignored such law and proudly quoted Nelson, and she suffered her own imprisonment as well. She was banished to Bloemfontein, a white Afrikaner district, where the only Blacks she saw were servants or cooks for white families.

She continued to resist the racist government. The African National Congress was banned, and she wore the ANC colors as a headdress.

And when, after Nelson’s freedom, the marriage ended, she remained a powerful presence in South African life, loved by the nation’s poor and dispossessed. For they knew, in their heart of hearts, that their struggle was her struggle.

“I have ceased a long time ago to exist as an individual. The ideals, the political goals that I stand for, these are the ideals and goals of the people in this country. They cannot just forget their own ideals. My private self doesn’t exist. Whatever they do to me, they do to the people of this country.”

Several years ago, when Nelson was being laid to rest, his third wife, Graca Machel Mandela, slumped in grief, was given a hug and a kiss to console her by his second wife, Winnie.

Nomzamo Winnie Mandela Madikizela, a class act to the very end and a lifelong revolutionary.