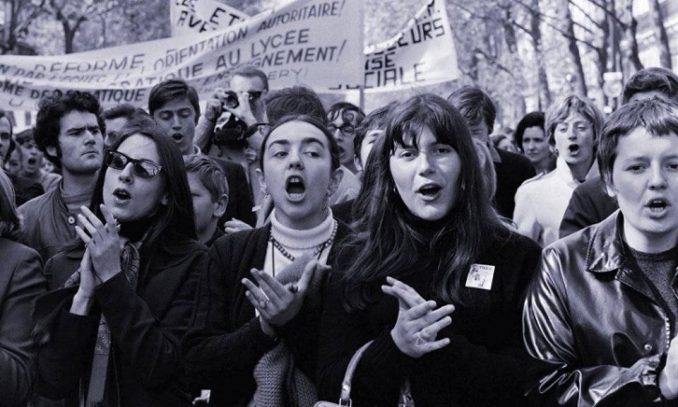 The year 1968 was one of great turmoil and unrest. It was a time when revolution seemed to be bubbling up in countries all around the world. Giving thorough attention to all the events of that explosive year and what lessons they might offer us today would take a great deal of time and ink. As such, the following takes just a brief look back at a single event to consider some of the lessons it may offer us today.

The May ‘68 movement in France, although short-lived, was a radical reimagining of the potentially revolutionary role of students, and their relation to the working class and capitalist society as a whole. By effectively bringing France to a halt, students and workers showed a new, more humanistic world is possible. Fundamentally anti-capitalist and anti-imperialist, the actions of the masses temporarily neutralized the paternalistic state power of the regime led by President Charles de Gaulle and suggested what a truly democratic and anti-imperialist France might look like.

The movement began at Nanterre — a U.S.-style university that was characterized by increased competition and decreased leisure and intellectual exploration, features that had long characterized the country’s intellectual culture. Being iin an industrial, working-class neighborhood, students attended classes amid factories and rubbed shoulders with workers on the streets. The combination of business or factory-oriented education and the bleak surroundings of capitalist exploitation sparked widespread discontent among the students. It was not just the university’s atmosphere and practices, but also capitalist society and culture — which they saw as the root problem — that the students sought to overthrow.

On May 2, after months of unrest and organizing, students seized control of the university’s loudspeaker and occupied a lecture hall as they played the “Internationale” overhead. In response to the disruption, the dean closed the university. This was followed the next day by a mass meeting at another Parisian university — the Sorbonne — which was attacked by the police. As the students and police clashed, it was decided to shut the Sorbonne down as well.

Police occupied the campus, which galvanized large numbers of students to take direct action. Barricades were erected using overturned cars, newspaper stands, cobblestones and anything else with which they could improvise. In the struggles of the following days, students would take control of the Sorbonne and the Latin Quarter of the city.

Residents provided support for the insurrection in the form of food, blankets and enthusiasm. When the Sorbonne was reopened, students claimed it for the people, and worker-student action committees were set up to coordinate the daily operations of the revolution.

The General Confederation of Workers (CGT) called for a one-day general strike and demonstration with the students on May 13. To many, this did not go far enough. Moved by the militancy of the students, over 100,000 workers went on strike and occupied 13 different factories throughout the country within a matter of days. First to be occupied was Sud Aviation — the manufacturer of the Caravelle jetliner.

The scale of the strike continued to grow as more workers from across the country stopped operations and took control of their places of work. This nationwide wildcat strike remains one of the largest in world history. At its height, more than 50 factories were occupied and 10 million workers from virtually all industries were on strike in both urban and rural areas. This action included many of the 2 million immigrant workers in France at the time, whose lot was even worse than that of the workers born in France. Belgian and German train conductors also participated by stopping their trains at the border with France. It stands as a modern testament to the power of worker militancy and solidarity.

As the recent revolt on the part of both students and workers in France attests, the revolutionary movement of 1968 failed to overthrow the capitalist order. Through time and concessions, the masses slowly filed back to work, and police took back control of the Sorbonne on June 16. The issue of time highlights the need for political power to be seized in order to maintain a general strike. With reformist Communist Party and union leaders who were not only ill-prepared but fearful of the consequences should the workers attempt to seize power, their hesitations gave opportunity for the bourgeoisie to reassert power.

De Gaulle called for elections, which, as Workers World Party founder Sam Marcy pointed out at the time, was “merely a maneuver calculated to divert the attention of the masses and make them oblivious to the fact that they already [had] power in their hands and [to] oblige them to transfer it back to the bourgeoisie.” (Workers World, June 6, 1968)

While De Gaulle managed to divert power away from direct democracy and back to bourgeois representative or illusory democracy, the masses succeeded in showing working people all around the world a glimpse of their true collective power. The events of May ‘68 stand as a historical testament to the revolutionary potential of people when they stand together to reject the divisions on which capitalism relies — be they racial, national, intellectual-physical or urban-rural.

Neoliberalization of the university

It shouldn’t be hard for students in the U.S. to identify with the students at Nanterre. Within the belly of the beast from which they revolted, our universities have become laboratories for neoliberalism and austerity. Intellectual rigor and exploration have, in many places, been overrun by the business model of education. The increasing cost of tuition and the lack of funding are insults when one considers the lucrative business operations in which many universities take part. Our schools have become effective partners in gentrification — weapons of displacement. Students are not immune from the consumer-based urban development. They feel acutely the strain of affordability and the pains of homelessness. (NPR, April 3)

All of this is, of course, exacerbated by the student debt industry. A college education is no longer a one-way ticket to upward mobility. In many cases, students are lucky if they can maintain the class standings of their parents.

The necessity of taking out loans for working-class and middle-class students has created a generation with little to their name other than debt. Where many gain in status through their degrees, the predominant pattern is that cultural capital is not easily converted into economic mobility — or stability, for that matter. The condition of students in the U.S. today mirrors the condition of students in Paris in 1968 and the precarious condition of the working class more generally.

As one student committee proclaimed shortly after the occupation of the Sorbonne: “We are no longer assured of our future role as exploiters. This is the origin of our revolutionary force. We must not let it slip away. … The student has become the ‘proletarian’ of the bourgeoisie, and the worker, the ‘bourgeois’ of the underdeveloped world.” (Quoted in “When Poetry Ruled the Streets” by Andrew Feenberg and Jim Freedman.)

We must utilize the instability and exploitation foisted on us by the system as a basis for solidarity and revolutionary action. The conditions of existence under capitalism must be made a unifying force to undermine bourgeois culture and society. In the spirit of ’68, the struggle continues. Long live the revolution!