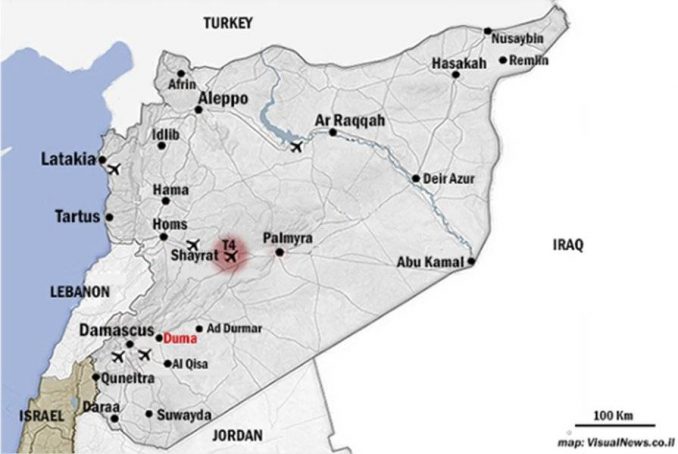 The following appeal was issued by the Executive Bureau of the General Federation of Trade Unions of  the Syrian Arab Republic right before the U.S. bombing of Damascus.

The United States and its followers from European countries, such as France, Britain and their proxies in the region such as Turkey, Saudi Arabia, Qatar and others, have been staging provocations against Syria to carry out their agendas on Syrian territory since their terrorist war against Syria began eight years ago.

These days we are witnessing the fabrication of alleged evidence, the latest example of which is the fabricated fiction of the Eastern Ghouta hit by chemical weapons used by the Syrian Arab Army. These colonial powers have always used the U.N. Security Council and its instruments to strike sovereign states by using illusory and fabricated pretexts to achieve their goals, such as the famous fiction of Colin Powell in the U.N. Security Council used to strike Iraq.

The chemical fiction was staged in Douma when the terrorists experienced the victories of the Syrian Arab Army that liberated eastern Ghouta, which contributed to the safety and tranquility of the people of Damascus, who had suffered a lot from the terrorists raining the capital, Damascus, with dozens of missiles and rockets.

The more the Syrian Arab Army achieves victories on the ground, the more the terrorists urge their paymasters to save them, as happened when they fabricated the chemical incident in Khan Sheikhoun.

This time, U.S. President Trump, French President Macron, and British Prime Minister May accuse the Syrian government of using chemical weapons in Douma on the basis of evidence and fabricated false videos of the so-called White Helmets, who are the medical wing of the fascist terrorists Al-Nusra in Syria.

They have held meetings of the U.N. Security Council in order to issue resolutions to strike the only legitimate Syrian government, one that fights terrorism in the world, despite the assertion of a member state in the Security Council, Russia, that the Douma area was free of any chemical traces after the Russian experts entered Damascus, refuting their claims.

The Syrian government has asked the experts of the International Organization for the Prohibition of Chemical Weapons to enter and verify the incident, but Trump and his assistants from European and Gulf Arab countries blocked their ears and decided to proceed with their lies and threats.

We at the General Union of Trade Unions in Syria declare our stand with our Syrian government and Syrian Arab Army under the leadership of President Bashar al-Assad, alongside whom we have faced terrorism and its sponsors for eight years. We affirm that we are confident of victory. These American and European threats constitute a flagrant violation of the U.N. Charter.

We call upon all honorable people from the World Federation of Trade Unions, the International Confederation of Arab Trade Unions and all Arab and international organizations to speed up the campaign of defending Syria by sending messages of solidarity and support to Syria and organizing marches and sit-ins in front of the American embassies in the world, condemning this blatant American aggression, to save the world from Trump’s ruthlessness.

We ask you to send letters to officials of the United Nations and the United States of America, stressing that the American president will lead to a new world war that will drag the whole world to further chaos, destruction and poverty and increase the number of refugees from the wars waged by the United States against sovereign states in the world.

Long live the Syrian people in their war against terrorism! Long live international solidarity with Syria!