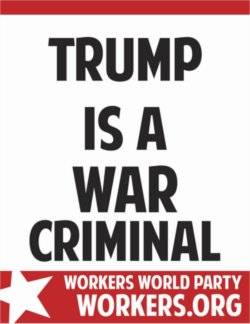 Just hours before he ordered the missile strikes on Damascus on April 13, President Trump granted a pardon to Lewis “Scooter” Libby. It was a signal to all those in his administration now complicit in war crimes that Trump has their backs.

Libby never served time, but was convicted of a complicated scheme involving the neocons in the George Bush/Dick Cheney administration. While anti-war protests were erupting in hundreds of U.S. cities and around the world over the invasion and occupation of Iraq, Libby attempted to discredit a former U.S. deputy chief of mission to Iraq, Joseph Wilson, who had written an op-ed in the New York Times debunking Bush’s claim that the Saddam Hussein government had amassed uranium for “weapons of mass destruction.”

But Libby’s plan backfired. He was convicted by a D.C. jury in 2007 of obstruction of justice and perjury and sentenced to 30 months in jail. Bush then commuted Libby’s sentence, but refused to pardon him, angering Cheney and the rest of the Iraq war hawks. Now Trump has exonerated this pro-war fanatic.

Another extreme hawk from the Bush White House now in Trump’s favor is John Bolton, who wants to expand the war into Iran.

During his 2016 campaign, Boss Trump curried favor with voters, but angered the neocons by calling the trillions spent on the Iraqi occupation a “waste.” He proposed instead that the Pentagon should just have seized all Iraqi oil wells and allowed Big Oil to extract Iraq’s petroleum — bluntly revealing what the war was really all about.

Once elected, Trump openly toyed with the idea of replacing all the occupying U.S. troops in Afghanistan with mercenaries to guard the properties of U.S. mineral corporations, while they robbed the wealth of one of the poorest countries on the planet.

But now Gangster Trump, under siege from a large portion of Wall Street and the media, has decided to enlist the support of the neocon faction so intent on regime change in Syria, Iran and Yemen. So on March 29, Trump made Bolton his new national security advisor. And on April 13, just hours before launching more than a hundred missiles on Syria, Trump pardoned Scooter Libby.

Of course, just as in the Iraq war, the Trump regime’s pretext for its attack was the charge that Syria possessed and used “weapons of mass destruction” — in this case, chemical weapons. And just as in the Iraq war, this is a complete fabrication. Why would the Syrian government want to attack a “rebel” sector when they already had an agreement in hand that these U.S.-supported rebels would withdraw from the area?

One key difference between the Trump attack and the Iraq invasion is that this time the U.S. made sure to launch its missiles just before an international inspection team, welcomed by the Syrian government, was due to arrive in Damascus to uncover the truth.

The corporate media and Democratic Party politicians have been bashing Trump daily — but not for carrying out military aggression without the smallest shred of legality, or for asserting the imperialists’ “right” of regime change. No, their chorus is that Trump is colluding with the Russians. Almost all have fallen in line behind the Syria attack and don’t even question the chemical weapons claim. Instead, they dutifully repeat ad nauseam the “evidence” of Syria’s chemical weapons, just as they headlined the “evidence” for Iraq’s nonexistent nuclear arsenal.

While some may caution against “deeper involvement” and call for “legislative approval,” the big business media and politicans stand united against the right of the Syrian people to determine their own leadership and government.

And while screaming about civilian casualties in Syria, they stand by in stony silence as thousands of unarmed Palestinians, including children, are shot and teargassed protesting against the Israeli fence that imprisons them in Gaza.

The rift between the Trump regime and the “liberal” capitalist faction may afford some openings for genuine struggle against imperialism and racism. But in general the working class must strive to win its independence from both sides and struggle against the entire capitalist establishment. U.S. imperialist wars have killed, wounded and displaced millions of poor people around the globe, killing and wounding thousands of U.S. soldiers and depressing the wages of millions of workers here and abroad — even as health care, pensions and education are all on the chopping block, while the banks, weapons makers and Wall Street rake in huge profits.

Stop the war against Syria! U.S. out of the Middle East!