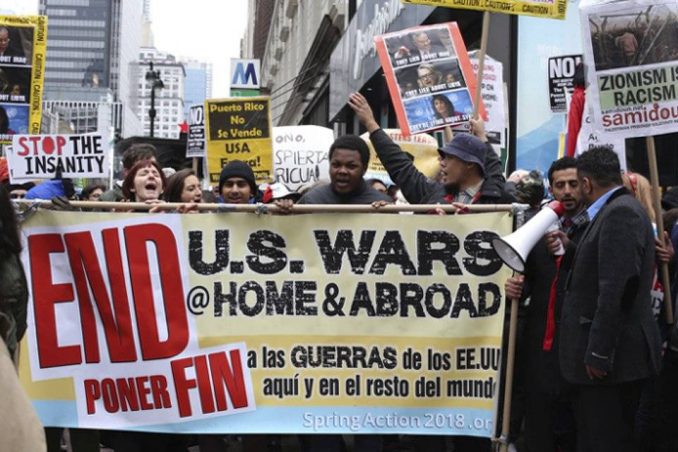 When the United States, Britain and France launched 107 missiles against Syria on April 13, an angry outcry followed in many countries, including anti-war protests in the U.S. The Trump administration claimed to be “punishing” President Bashad Assad’s government for allegedly using “chemical weapons” in Syria. But the truth is that the U.S. and its allies are smearing the Syrian leader as part of their long-range plan to oust him and assert imperialist control of the country.

In protest, hundreds of Syrians gathered at sites in Damascus, the capital, denouncing the Pentagon’s airstrikes and cheering their army’s defense system, which they said successfully shot down or derailed two-thirds of the missiles fired.

Solidarity with the Syrian people and outrage at the imperialists’ assault were expressed in many countries.  Demonstrations took place in Jordan and Occupied Palestine. Hundreds from the Arab community marched with banners reading, “Hands off Syria!” to the U.S. Consulate in Haifa, Israel. Protests took place in Istanbul and Ankara, Turkey, and at the gates of the RAF Akrotiri, a British military base, in Cyprus and in Kolkata, India.

In Europe, protests were held in Berlin and Rome, while thousands, led by the Greek Communist Party, marched in Athens and picketed the U.S. Embassy, condemning the U.S. Among other actions, the Stop the War Coalition organized a rally in London on April 13 and in that city and Bristol on April 16, decrying their government’s complicity in the air strikes.

In Latin America, protests were held at U.S. embassies in Santiago, Chile, where some demonstrators were arrested, and in Mexico City, where people draped banners demanding rights for everyone, regardless of country of origin.

The IAC’s press release explained the mobilization’s aims: to oppose intensified U.S. militarism in Afghanistan, Yemen and Syria; drone attacks; threats against north Korea, Iran and Venezuela; and the appointment to Trump’s administration of super-hawks Mike Pompeo and John Bolton. Other demands were to end racist police killings and fund jobs and social programs, not war.

The coalition condemned U.S. aid to Israel, oppressor of the Palestinian people. The government has not uttered one word of criticism about Israeli soldiers’ horrific shooting of unarmed Gazans protesting the blockade — showing once again that Washington supports Israeli atrocities against Palestinians.

Workers World activists sent in reports from the following cities.

Groups, including the Syrian American Forum, WWP-Boston, Answer Coalition-Boston, and the Boston Hands Off Syria Coalition, gathered at Park Street on April 12 to oppose threatened U.S. intervention. Following the missile attack on April 14, these same groups again mobilized, joined by the immigrants’ rights group Cosecha and anti-war veterans. The weekly Peace Vigil held by anti-war veteran organizations denounced the airstrikes.  A rally at Roxbury’s Dudley Square transit station was followed by a march to Ruggles station in downtown Boston.

Event speakers denounced the continued imperialist destruction of the Middle East, pointing to the  U.S. devastation of Libya and the continued occupation of Iraq. They highlighted the wars’ effects inside the U.S., including the dismantling of social programs to fund the Pentagon’s budget and boost arms’ manufacturers’ profits. Syrian-Americans expressed their opposition to any U.S. intervention in their homeland. Many feared for their families there. A young Syrian woman recited her poem about the war.

An ad-hoc anti-war coalition with representation from various local groups and organizations demonstrated April 15 against U.S. wars at home and abroad, focusing on the bombing strikes in Syria. Protesters gathered at Niagara Square and marched to a rally at Naval Park. Speakers were from Black Lives Matter, Democratic Socialists of America, Green Party, IAC, WW, Buffalo Forum, Veterans for Peace, Friends of the Soviet People and local student groups. 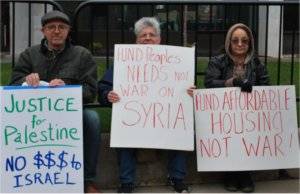 Sixty people held a press conference at a homeless shelter, then marched through downtown Rochester to the federal building to oppose U.S. wars at home and abroad on April 13.  Protesters connected U.S. wars and the bloated military budget to the war against the poor at home. The House of Mercy homeless shelter, Peace Action and Education, and the IAC initiated the event. Other participating organizations included Veterans for Peace, Jewish Voice for Peace, Christians Witnessing for Palestine and Metro Justice.

A multinational, multigenerational crowd of hundreds packed midtown Manhattan’s Herald Square on April 15 for a rally called by the United National Antiwar Coalition. Speakers from nearly 40 organizations represented the range of nations targeted by U.S. imperialism, along with social justice, union, community, youth and antiwar groups in solidarity with all peoples under attack. Indigenous and Korean drumming punctuated the speeches and chants.

The rally was followed by a march to Trump Tower led by Syrian, Yemeni, Palestinian, Korean and Puerto Rican activists flying flags, drumming and chanting. A popular sign was: “They lied about Iraq; they lied about Libya; they’re lying about Syria!” Besides the many people of Middle Eastern origin who took part, the protest was well attended by Black and Latinx organizations fighting racism and attacks on immigrants, as well as veterans of the Vietnam antiwar movement and other progressives. 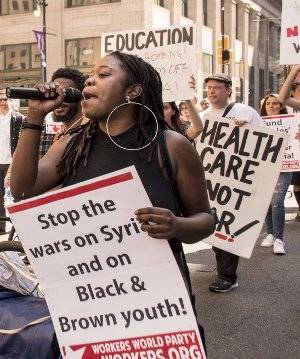 Some 100 people rallied outside City Hall on April 14 to demonstrate against the U.S. attack on Syria.  Then they marched past the French and British consulates to protest those governments’ participation in the airstrikes. Speakers and chants identified the attacks as an extension of racist violence against people of color at home and internationally. By uniting activists from many communities, the event demonstrated that solidarity between political movements is essential to building a strong anti-imperialist coalition. Onlookers responded positively to the activists’ message, showing the unpopularity of imperialist war. 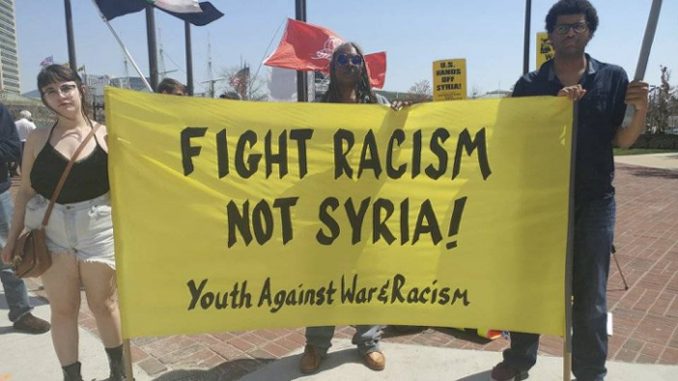 Demonstrators, mostly young, came out in response to an emergency call put out by the newly formed group Youth Against War and Racism, WWP and the Peoples Power Assembly to protest imperialist military action against Syria on April 14. The protest was spirited, with folks chanting, “1, 2, 3, 4, We don’t want your racist wars! 5, 6, 7, 8, Stop the killing, stop the hate!”  “No justice, no peace!” and “U.S. out of the Middle East.”

Mekdes Woineshet, a young woman of Ethiopian descent, emphasized that money being spent by the U.S. to bomb countries in which people of color live, killing and maiming innocent civilians, should instead be spent at home to provide education and health care. While folks were chanting against the bombing and calling for the end of U.S. imperialism, many passersby beeped their horns or gave thumbs-up to show their support.

An emergency downtown rally of 100 demonstrators April 15 protested the airstrikes on Syria and  the massacre of Palestinians in Gaza. They and passersby cried out, “Free Palestine” and “From Syria to Palestine, occupation is a crime!” Speakers from anti-imperialist groups included WWP member Qasina, who read a poem by June Jordan, “Apologies to All the People in Lebanon.” Stressing that these wars mean less funding for needed programs at home, community organizer Raul said, “All the money that can be used for us is gone; we are all affected by this.”

The plaza of Little 5 Points was decorated with dozens of banners and signs bringing a message of “No U.S. war at home and abroad” to the popular shopping district on April 14. On all four corners of the busy intersection, demonstrators held placards denouncing the attack on Syria and hostile threats against People’s Korea and Venezuela. Support for Palestine; demands for housing, health care, jobs and education; and declarations of solidarity with immigrants and the Black Lives Matter movement were plentiful.

Passing pedestrians and drivers honked and waved at the sight of the anti-war message. Rally speakers included representatives of Black Alliance for Peace, Black Lives Matter, Jewish Voice for Peace, SOAWatch, Vets for Peace — as well as an undocumented youth, an anti-fascist organizer and a housing activist. The Georgia Peace and Justice Coalition and the IAC’s Atlanta chapter organized the rally. 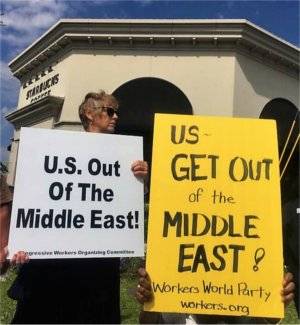 Outraged demonstrators protested at the busiest intersection in Houston April 14. They held signs and banners demanding, “U.S. Out of Syria and the Middle East.” For more than two hours, they chanted over the sound system, attracting the attention of thousands of drivers and their passengers. Many honked their horns in support and shouted thanks to protesters. Participants included the National Domestic Workers Alliance, Fe y Justicia Workers Center, the Brown Berets de TejAztlan, WWP, Houston Socialist Movement and Socialist Alternative.

The Students for a Democratic Society chapter at the University of Utah held a rally in front of the federal building in Salt Lake City on April 15 to demand “No war on Syria.” Speakers included representatives from SDS, WWP, Freedom Road Socialist Organization, Utah Against Police Brutality and Teamsters Local 222.

Hundreds of demonstrators carried Syrian flags and placards demanding an end to the war on Syria and calling President Trump a war criminal at a march and rally April 14, which began at Pershing Square in downtown Los Angeles. The event was led by Arab Americans for Syria, and various anti-war and social justice organizations participated, including the IAC, Hands off Syria Coalition, Union del Barrio, Answer Coalition, and Committee in Solidarity with the People of El Salvador. 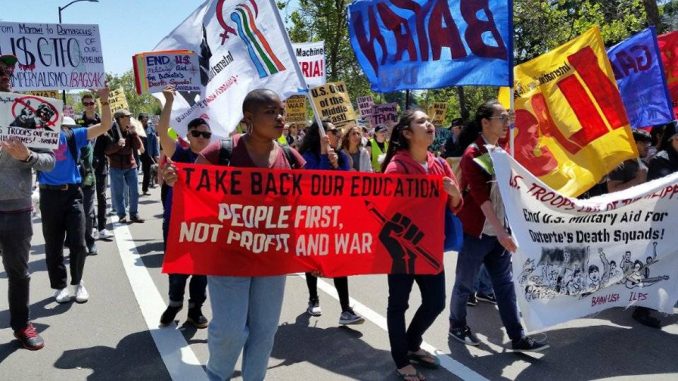 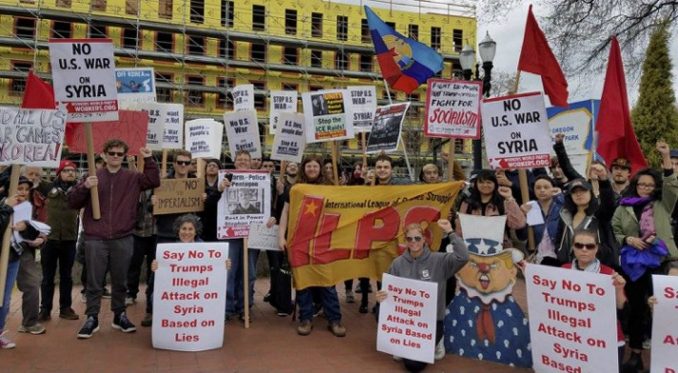 Over 50 people rallied at Portland’s waterfront park to protest the bombing of Syria and say, “Stop U.S. wars of aggression.” Speakers addressed the U.S. media’s lies and propaganda about Syria, Ukraine, Yemen, north Korea, Venezuela and Honduras. Those who traveled from WWP’s Federal Way, Wash., branch waved large flags as each of the speakers addressed the crowd.

The International League of Peoples’ Struggle, Portland Central American Solidarity Committee and the May 1 Coalition were among the many groups that spoke and denounced U.S. Imperialism. WWP-Portland called and sponsored the event.