According to the Washington Post database, 294 people in the U.S. have been fatally shot by police from the first day of this year to April 5. The breakdown of those killed based on nationality is: 124 white, 60 Black, 38 Latinx and 72 “other” or “unknown.” Fifty-six were diagnosed with mental illness, including Vassell.

According to Quick Facts issued by the U.S. Census, as of July 1, 2016, whites constituted 76.7 percent of the population, while Black and Latinx peoples combined constituted 31 percent. The number of police killings of Black and Brown people is grossly disproportionate to their overall numbers in the U.S. The police killings of Indigenous people are not even on official records! None of the cops involved in these shootings have been indicted on any kind of murder charge, much less arrested.

These killings help to reinforce the Marxist view that agents of the repressive state apparatus, especially the police, are above the laws that working and oppressed peoples are obliged to obey — or they risk being heavily fined, put in jail or killed.

This is why capitalism, which the police protect and serve as an armed force, must be abolished and replaced with a socialist system that provides for human needs for all — and doesn’t serve the interests of the super-rich. 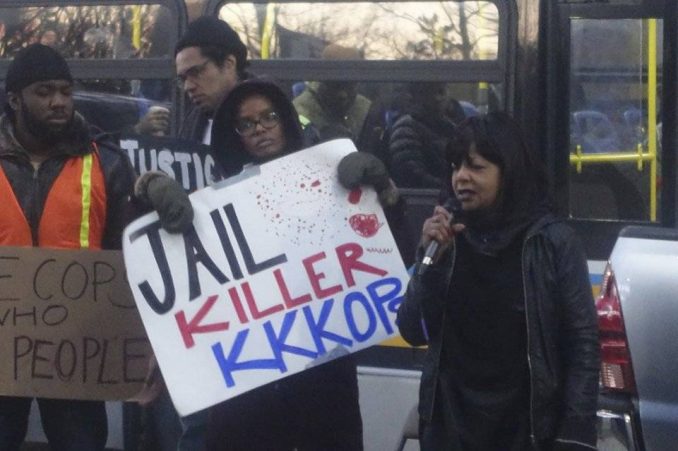 Hundreds of people gathered in front of Boston Police Department headquarters in Roxbury, Mass., on April 4, the 50th anniversary of the assassination of the Rev. Dr. Martin Luther King Jr.  They were there to protest the police killing of Stephon Clark in Sacramento, Calif., and to demand justice for the victims of police shootings in Boston.

Among the rally speakers were Hope Coleman and Rahimah Rahim, mothers of Terrence Coleman and Usaamah Rahim, two of those fatally gunned down by police in recent years.  After this event, activists and community members marched from police headquarters to Peters Park, a few blocks away from where Coleman was murdered in 2016. Among those at the day’s actions were a large number of high school students, some of whom were involved in organizing the recent Boston March for Our Lives.

Mass Action Against Police Brutality, which organized the event, has repeatedly called on Massachusetts Attorney General Maura Healey to appoint a special prosecutor and reopen the cases of all Boston victims of police brutality. 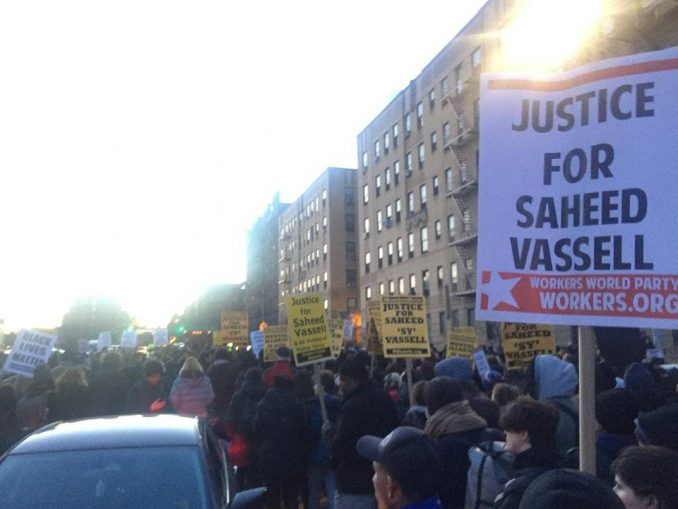 Saheed Vassell’s killing by police sparked a massive protest by his community in Brooklyn on April 5.

In Crown Heights, Brooklyn, on April 4, four police officers (three undercover) fired 19 shots into one Black man holding nothing but a metal pipe. They fired without question or hesitation.

They killed Saheed Vassell, a 34-year-old with bipolar disorder. He left behind a 15-year-old son, Tyshawn; a mother and father, Lorna and Eric Vassell; a family and a whole community that loved and supported him.

Residents poured into the streets immediately, expressing grief, shock and anger at the murder of one of their own. Cops closed down the streets and began militarizing the area to counter the people they had just traumatized. All night cops faced off residents in the streets and had snipers on the roofs of surrounding buildings.

Within hours of the murder, a surveillance video surfaced that showed Saheed pointing the metal pipe at people on the street. In this video people didn’t even flinch. But this video was used to justify Vassell’s murder and criminalize him after his death.

That night, calls were made for an action the next day for Saheed Vassell. NYC Shut It Down, the People’s Power Assembly and Workers World Party met with family and community members to gauge their feelings and gain their consent to help organize a rally and march.

The following day, thousands crowded around speakers at the corner of Utica Avenue and Montgomery Avenue, showing solidarity with the family and community and anger at the constant murder of Black people. The rally heard from Vassell’s mother, Lorna, and his younger brother, who showed grief and proclaimed the need for justice.

Following the rally, the crowd took to the streets, shutting down lanes of traffic with little police presence. The march went to the 71st Precinct where protesters faced off behind the barricades, demanding the release of the names of and the firing of the officers who murdered Saheed Vassell, and the release of 911 call information and recordings. Speakers asked people to stop calling the police. Shannon Elayne from Why Accountability gathered the crowd as they chanted over and over, “Cops lie all the time, and all the time, cops lie.”

After the crowd discovered the cops were barricading them from the surrounding streets, a wildcat march happened. Hundreds of protesters chanted through the streets. This time, the police followed en masse while helicopters flew above, monitoring the crowd. Community members lined up against the police at Utica and Montgomery to prevent them from coming into community-occupied space.

Some folks mentioned they recognized various officers from Manhattan who were not part of the local 71st Precinct. Protesters chanted at the cops to “Go home!” After two hours, the police left in droves, leaving behind one car for surveillance. The crowd cheered; music played. The family of Kimani Gray, a 16-year-old Black child murdered by police in 2013, was there and played music from their cars. Ever since, community members have been in the streets fighting off the police and demanding justice for Saheed Vassell.

The 911 call has been under speculation by the community, as people from Crown Heights knew Saheed Vassell and how harmless he was. He was regarded as a funny “jokester,” who would pick up trinkets on the street and play with them like toys.

It must also be noted that it is part of the culture in oppressed communities to never call the police, especially not about people whom you know. Black and Brown folks know all too well that calling the police will only bring more harm. These communities have developed constructive ways to settle issues without police presence. This leads to the conclusion that the 911 callers were not from the community.

Crown Heights is a middle-class neighborhood in the heart of Brooklyn. It is a predominantly Caribbean and African community battling the plague of gentrification, another form of systematic violence against oppressed communities. Gentrification is displacing and driving Black and Brown folks out of their homes, and the result is murder when newcomers call the police on disenfranchised individuals or groups.

The 911 call also connects to the stigmatization of mentally ill people. The police described a caller as saying, “A man is pointing guns at people and he looks crazy.” This ableist language paints mentally ill people as inherently and inevitably violent. But, according to Mental Health.gov, people with mental illnesses are 10 times more likely to be victims of violence, and only 3 percent to 5 percent of folks with mental illness are violent.

A Drexel University study found that Black men are three times more likely to be killed by police than white men. (tinyurl.com/y7w8ecec)

The murders of Black and Brown bodies are nothing new and are a result of the capitalist state. Law enforcement institutions in the U.S. originated as slave catchers. Black folks were and still are treated as disposable bodies only to be used for labor and exploitation. To end the murders of Black folks, we must disarm and abolish the police and, importantly, abolish capitalism.