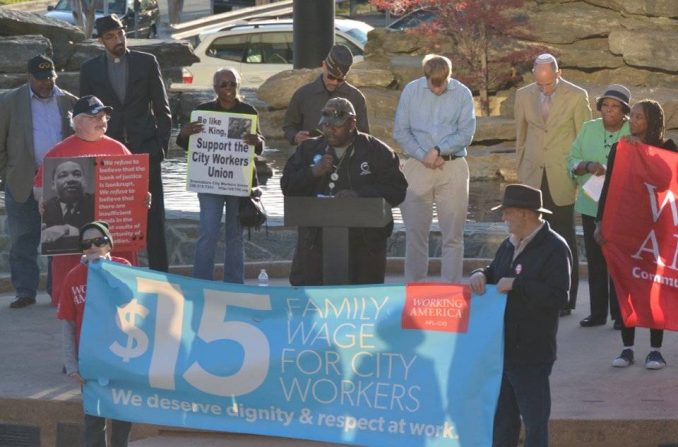 Durham, N.C. — When the Rev. Dr. Martin Luther King Jr. came to Memphis, Tenn., in support of striking sanitation workers 50 years ago, he was actually on his way to North Carolina. A few months after his assassination, in August 1968, sanitation workers in Charlotte, N.C., also went out on strike. This inspired many other sanitation worker strikes across the South in 1968, including in Atlanta, St. Petersburg, Fla., and Durham, N.C. In Charlotte, the mediator was forced to meet with the workers, Black and white together, in a public park, because facilities large enough to hold the entire group were segregated.

King’s campaign for economic and civil rights continues in North Carolina, where the NC Public Service Workers Union, United Electrical Workers Local 150, has been building a statewide campaign to fight for a Municipal Workers Bill of Rights and also to challenge the Jim Crow ban on public sector collective bargaining.

Winston-Salem workers fight for $15 and more

On April 4, the anniversary of King’s assassination, city workers, community-labor support groups and faith organizations in Winston-Salem, N.C., rallied for a family-supporting wage of at least $15 an hour. Hundreds of city workers are currently making the city’s minimum of $11.25 an hour. Over 100 people gathered at the event, organized by Working America, with support from over a dozen other groups, including UE150, NC AFL-CIO, First Baptist Church, Goler Memorial A.M.E. Zion Church, the Winston-Salem NAACP and such long-standing local civil rights leaders as the Rev. John Mendez and the Rev. Paul Robeson Ford.

“We have come today not only to commemorate Dr. Martin Luther King Jr., but to build a movement,” the Rev. John Mendez, pastor of Emmanuel Baptist Church, told the crowd. “A commemoration stands still, but a movement moves forward.”

Monticello Mitchell, a city worker in the Vegetation Department, spoke out against the economic squeeze faced by city workers. “The packages in the store are getting smaller and the prices are getting higher,” Mitchell said. “A $15 wage for those who don’t make $15 would help.”

On hand were members of the two-year-old Greensboro City Workers Union, a chapter of UE Local 150, to lend their encouragement for efforts of Winston-Salem city workers to organize a union. Bryce Carter, Streets Department worker and UE150-elected steward, shared many of their recent union victories, including wage improvements of the lowest paid from $8.03 per hour to $11.50. Also won were policy changes to create space for organizing the union, including winning payroll deduction. Carter said: “I am proud of our chapter. We just keep pressing on. We come together and make changes.”

A major issue that sparked the Memphis sanitation strike 50 years ago was the death of two workers, Echol Cole and Robert Walker. Only this past summer, a Charlotte city worker, Anthony Milledge, was killed by heat-related illness after working overtime in the broiling summer heat. Greensboro city workers were also injured on the job last summer. The union exposed the city of Greensboro’s lack of heat-safety guidelines to protect workers. Carter noted that, after pressure from the union, “The city has now drafted a policy to keep workers safe in excessive summer heat.”

Durham city workers have also been organizing for improved safety, union rights and raises. After a campaign of several months, the Durham City Council voted April 2 to pass a resolution commemorating April 4 and the legacy of Dr. King, and calling on the state legislature to repeal the law, General Statute 95-98, passed in 1959 by an all-white, Jim Crow state legislature, that bans public workers from collective bargaining. Through the resolution, the council also conveyed three pages of recommendations for “improved union access and rights” to the city manager.

In concert with the Durham Workers Assembly, UE150 has been organizing pressure on the city to pass this resolution, along with forming a Workers Rights Commission to assist private sector worker organizing.

The Carolina Auto, Aerospace and Machine Workers Union (CAAMWU), a chapter of UE Local 150, also organized a workers’ rally on April 4 at the Cummins engine plant outside Rocky Mount in rural Whitakers. The Teamsters, who organize Cummins workers in West Virginia, had reached out to UE150 about a companywide campaign to fight back against a high-deductible health plan.

Workers at the plant wore stickers to their jobs that stated, “Cummins high deductibles keep us sick. All Cummins workers want $1,000 more in their HSA” [health savings account].

The April 4 rally leaflet stated: “Things have changed at Cummins. Now the company is forcing workers into dangerous, unaffordable, high-deductible health care plans. Employees skip medications, delay doctor visits and are racking up debts. And the inexpensive health services at the state-of-the-art Cummins Livewell Health Center are only convenient for those who live near the company’s headquarters in Columbus, Ind.”

According to the joint UE-Teamsters press release, “Cummins is one of the largest diesel engine manufacturers in the world. In 2017, Cummins had revenues of $20.4 billion and net income of $1 billion. Shareholders received $700 million in dividend payments in 2017. Since introducing high-deductible health plans at Cummins, the top five managers made more than $150 million in total compensation, and shareholders received more than $3 billion in dividend payouts, though the company itself has not achieved lasting medical cost savings.“

Jim Wrenn, Cummins Rocky Mount employee and president of UE150/CAAMWU, pointed out: “We have coworkers facing $6,000 or more each year out-of-pocket to get health care for their families, so this is a huge financial cost for us to bear.”

This campaign continues in the spirit of Dr. King, who said, “Of all the forms of inequality, injustice in health care is the most shocking and inhumane.”