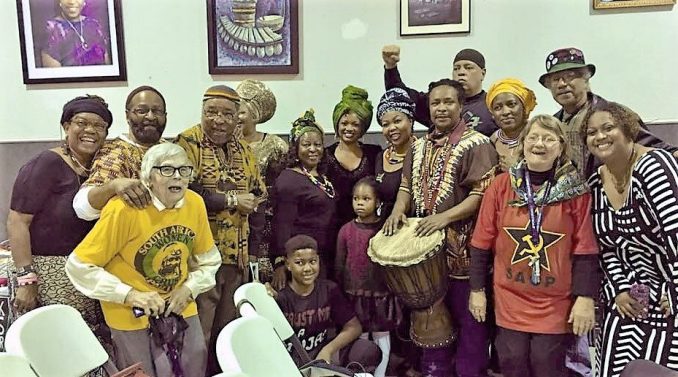 Houston — A tribute, “From South Africa to Third Ward: A Celebration of the Life and Legacy of Winnie Madikizela Mandela,” was held April 8 at the SHAPE Community Center. This was the exact location that Madikizela Mandela visited in Houston in 1981.

The gathering was organized by Akua Holt with Amandla Productions and chaired by the national chair of the National Black United Front, Kofi Taharka. Over 100 people were treated to music by Swatara Olushola, poetry by SisterMama Sonya and a phone call from an activist in South Africa. Drumming by 12-year-old Olaniyan, Runyararo Fana, Phindisela Mkhatshwa and Furaha Terri Nairn-Collins opened and accompanied the program as activists spoke.

John “Bunchy” Crear, a leader of the Black Panther Party Alumni Association, told of the Panthers’ involvement in the anti-apartheid struggle and support for all liberation struggles in Africa. South African Bongi Goba spoke about the love her people have for Mandela and the dignity she possessed despite all her travails, from imprisonment to banishment: “Winnie was the rock who led our women all over the world to seek our liberation. Mama Winnie led the underground railroad in South Africa. She held the struggle on her shoulders.”

Goba also sang music from her homeland with another South African, Phindisela Mkhatshwa. The secretary of the local National Black United Front, Folade Madzimoyo, told her personal story of learning about Winnie Mandela and how touched she was by her long life of organizing against apartheid. “I was sad when Nelson Mandela died, but I was crying when Winnie died,” she said.

To close the tribute, Taharka asked all those in attendance who had ever marched or picketed against apartheid to stand up. As about two dozen people rose, they were strongly applauded.