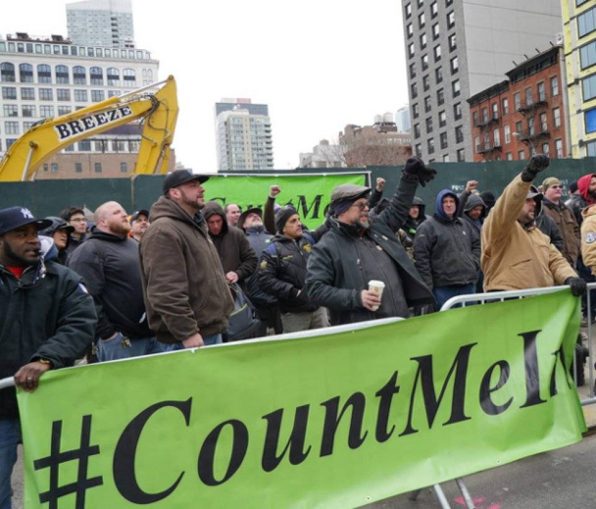 Thousands of construction workers crammed two blocks south of Times Square April 4 to protest The Related Companies’ use of nonunion labor on the massive Hudson Yards westside development. “New York City is a union town,” said Gary LaBarbera, president of the Building and Construction Trades Council of Greater New York, opening the rally. After a moment of silence remembering Dr. Martin Luther King Jr., he noted that workers are still in the streets 50 years after his death.

Chanting “Union!” and waving green #CountMeIn placards, the workers were protesting because Related, which built the first phase of Hudson Yards with union workers, has refused to sign a project-labor agreement for the second phase. The developer hired Boston contractor Gilbane Building Co., which uses a so-called “open shop” mix of union and nonunion workers, to construct a 51-story office tower. Also, Related has hired nonunion metallic lathers and operating engineers, not workers from Laborers Local 79.

Noting that nonunion labor is cheaper, Mason Tenders District Council Business Manager Bobby Bonanza said: “It’s not about saving nothin’. It’s about breaking us.” Carpenters Local 157 member Dave Songuy agreed that “New York City is the last stronghold.” Vincent Alvarez, of the NYC Central Labor Council, added, “As goes New York City, as goes New York State, so goes this nation.” Steamfitters Local 638 President Patrick Dolan Jr. joined in: “If you can break the trades in New York, they’re done in the rest of the country. It ain’t gonna happen under us.”

Related is suing the Building Trades Council and LaBarbera personally, accusing them of defamation and fraudulently inflating labor costs. The council, joined by the New York State AFL-CIO, has responded by filing unfair-labor-practice complaints with the National Labor Relations Board, accusing Related of illegally retaliating against union supporters. (Labor Press, April 5) This struggle is just beginning. Stay tuned.

E-cigarettes have different qualities from those of their analog peers, but conditions are the same for the mostly Latinx workers who labor in Southern tobacco fields. Workers routinely get “green tobacco sickness,” heat stroke and pesticide exposure that poisons them, while children must work to support their families. A North Carolina farmworker earns less than $8,000 a year.

That’s where the international union fighting for farmworkers’ rights, the Farm Labor Organizing Committee, comes in. More than 10 years ago FLOC took on Reynolds American, one of the largest tobacco corporations in the world. FLOC wants Reynolds, which makes the e-cigarette VUSE, to “agree to give farmworkers a voice and a practical mechanism they can use to negotiate better working and living conditions without fear of retaliation!”

To boost that fight, FLOC initiated a boycott of VUSE and the 100,000 convenience stores, like 7-11, Couche Tard (Circle K and Kangaroo) and WAWA, that account for 36 percent of tobacco sales. To support FLOC’s fight, sign the petition at bit.ly/BoycottVUSE. For more information, email [email protected]

After nearly 11 months of bargaining and 22 days on strike, the Communication Workers and Frontier reached a tentative agreement for 1,400 CWA members who work in West Virginia and Ashburn, Va. As of ratification, the contract expands job security for all members — a major victory — and provides wage increases and modest increases in health care coverage.

“Going on strike is never easy,” said  Ed Mooney, vice president of CWA District 2-13 in a statement. “But [our members] knew what was at stake for their co-workers and for their communities. Thanks to their strength and unity, [we] reached an agreement with Frontier that [continues] good, family-supporting jobs.” Workers received an outpouring of support from community members who were already in the streets supporting the teachers’ strike.  They returned to their jobs on March 28. (cwa-union.org, March 25 and April 2)

Organizing: ‘Best thing that ever happened’ at LA health center

Health center workers at the Frank D. Lanterman Regional Center in downtown Los Angeles won an organizing victory by voting 113 to 55 to join United Electrical Workers on March 22. These workers provide advocacy and support for people with disabilities, allowing them to live in their own communities. But management wasn’t helping them. So the workers organized to stop management disrespect, thereby helping both themselves and their clients.

In UE’s West Region delegate meeting in Chicago March 25-26, the workers told of management’s excessive write-ups that lead to firings and ridiculous policies like having to somehow report to management eight hours ahead of time when they are sick. Marc Baca reported the good news: “People throughout this process have become more militant, they’ve lost that fear they had. This campaign essentially brought back the sisterhood and brotherhood that we used to have, the sense of family … [Organizing] is the best thing that has ever happened at Lanterman.” (April 2, UE News)