Update to this slightly edited article, originally published in Workers World on March 3, 2016: Not only is Dr. Hooker still alive today at 103, but she and other founders of the Tulsa Race Riot Commission finally won some historical reparations when on Feb. 20, Oklahoma state legislators announced the launch of an online public school curriculum related to the 1921 racist attacks. Information about the “Tulsa Race Riot” had not previously been taught in the state’s school system. (tulsa2021.org) 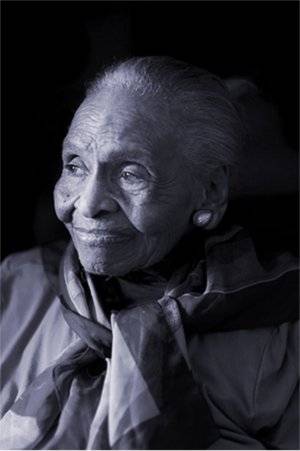 Dr. Olivia Hooker is a 101-year-old survivor of the horrific racist attack on the African-American community in Tulsa, Okla., known as the Tulsa race riot. To this day, she remembers the devastating, traumatic experience of rioters coming onto her family’s property on May 31, 1921.

Throughout U.S. history, there have been deliberate efforts to keep African Americans at the bottom of society. Black people have consistently been the targets of racial hatred and violence. The law of the land continues to be white supremacy and privilege. The U.S. is rife with racism, which is exported worldwide through imperialist propaganda and war. Due to centuries of social, economic and political disenfranchisement, the Black population has much catching up to do.

Just two generations after the abolition of slavery, descendants of enslaved people in the Greenwood section of Tulsa created a thriving, self-sufficient community that was a center for business and wealth. Greenwood was known as “Black Wall Street.” Residents built and cultivated homes, schools, churches, restaurants, banks, theaters, hospitals, hotels and stores. Its residents were among the best educated African Americans in the country. 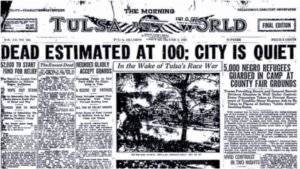 However, African Americans’ attempts to rise up and move beyond oppression were defeated. Greenwood was prosperous, but its growth was short-lived. Those who dared to dream — and substitute commercial success for segregation — were shoved back down to the status quo. Racial hatred kept the entire community from reaching their goals in a country that deprived them of their basic rights and dignity.

Resentment by hostile whites, who were determined to maintain white dominance, exploded into mob violence. Acts of hatred lasted throughout the day and into the night in Greenwood. Rifle shots were fired from planes; fire bombs were dropped.

White rioters ransacked and looted homes and businesses before burning them down. They destroyed more than 1,000 homes, leaving 10,000 Black people homeless. The racists murdered an estimated 300 people and injured 800; others died trapped in the fires. Even the police shot residents. Within 16 hours, the entire community of 35 city blocks was obliterated.

Martial law was declared. The National Guard did not arrest the racists, but rounded up and detained thousands of African Americans, some for several days. Men and boys were placed in internment camps. All the weapons they had for self-protection were confiscated and given to whites.

Dr. Hooker was born in Muskogee, Okla., in 1915. When she was three years old, the family moved to Tulsa. When the riot occurred, Dr. Hooker was six. Racists burned the doll clothes her grandmother made that were hanging on the clothesline. Inside the house, the assailants broke or stole the family’s possessions. They even destroyed the food on the stove. Then they took away her father and 8-year-old brother.

After the racist attack, Dr. Hooker’s mother and five children moved to Topeka, Kan. Her father stayed behind to try to rebuild his department store. A year later, the family moved back to Tulsa, attempting to pick up the pieces of their broken lives. After two years, the family moved to Columbus, Ohio, as Dr. Hooker’s father had been offered a job there. Both parents had been teachers.

While living in Columbus during the Great Depression, Dr. Hooker earned a bachelor’s degree in elementary education at Ohio State University in 1937. In 1945, she was the first African-American woman to join the U.S. Coast Guard. She had applied to the U.S. Navy’s Women Accepted for Volunteer Emergency Service program, but was rejected because of her ethnicity. She disputed the rejection and was later accepted, but chose instead to join the Coast Guard to break the color barrier there, eventually earning the rank of petty officer second class.

Dr. Hooker received a master’s degree from Columbia University’s Teachers College in New York City in 1947. She received her doctorate in psychology from the University of Rochester in 1961 and then worked as an in-house psychologist at Bedford Hills Correctional Facility for Women. In 1963, she began working as a senior clinical lecturer in psychology at Fordham University and became an assistant professor there until 1985.

Dr. Hooker co-founded the American Psychological Association’s Division of Intellectual and Developmental Disabilities. At 87, she retired in 2002. At 95, she volunteered with the Coast Guard Auxiliary in Yonkers, N.Y.

It wasn’t until 2001 that the city of Tulsa formally apologized for destroying Greenwood. Two years later, Dr. Hooker and other survivors founded the Tulsa Race Riot Commission and filed a lawsuit against Tulsa and Oklahoma, demanding reparations for millions of dollars in damages. Their demands included health care for descendants living in Greenwood and scholarships for area students to attend Historically Black Colleges. The Supreme Court refused to hear the case. No victims nor their descendants received compensation. Mentions of the riot were omitted from local and state histories, books and classrooms for decades.

Dr. Hooker has been a psychologist, humanitarian and women’s rights advocate, and asserts that everyone must strive toward preventing other catastrophic violence like the Tulsa attack. She has devoted much of her life to educating young people, so that subsequent generations will be more tolerant of racial diversity than previous generations.