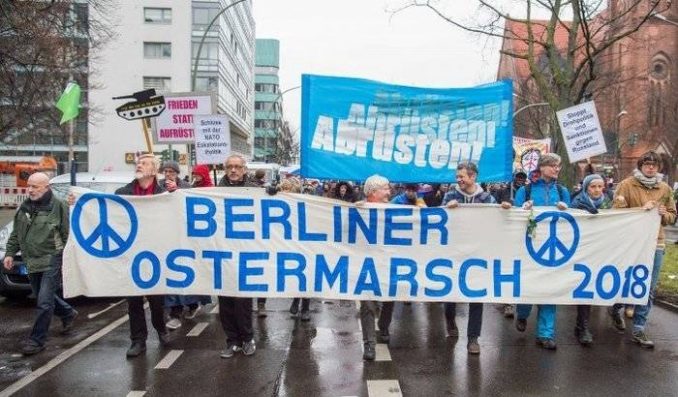 The traditional Easter Peace March began in England in 1958. West Germans began in 1960, and their march ended ended at the enormous Bergen-Hohne military camp and testing range between Hanover and Hamburg. That was in the midst of the threat of nuclear war between the U.S.-led imperialist world and the socialist world of the Soviet Union and its allies. Workers World received this release from this year’s marchers in Berlin in the midst of the current U.S.-NATO-European Union campaign demonizing and threatening Russia.

On the Easter march in Berlin, the following statement of the organizers met with great approval:

“We, participants in the Berlin Easter March, are very concerned about the preservation of peace in Europe.

“We are appalled that governments without evidence, simply on the basis of suspicions, speculations and allegations, accuse the Russian government of poisoning Skripal, and flout every principle of the rule of law by imposing sanctions and expelling diplomats. The German government has also participated in this punitive action on the pretext of sending a ‘strong signal of unity,’ directed against Russia.

“Contrary to other claims, the Russian government has from the outset expressed its willingness to participate in the investigation of the Skripal case. However, this offer of cooperation has been rejected by the British government to date and ignored by the German government.

“Following NATO’s deployment to Russia’s western border, the tension with Russia has continued to escalate. Our country has a special historical responsibility to ensure peace with Russia and throughout Europe. Let us not forget that the Nazi-German war made victims of 27 million Soviet citizens.

“We call on the Federal Government to do everything possible to prepare the way for the West to carry out a policy of détente with Russia and with rationality, reason and objectivity, resume the processes of political discussion.

“Let us put in place a ‘strong signal of unity’ for peace: Détente with Russia — in our name!”