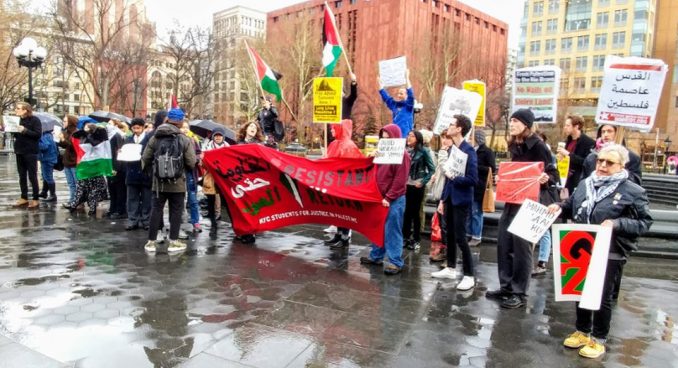 Within a few hours of the news that Israel had attacked the Great March of Return, a crowd gathered in New York’s Washington Square Park to protest this new Israeli massacre.

Speakers at the rally pointed out that Israel killed 17 and wounded 1,400 — according to the latest figures available April 1 — at “peaceful protests called by all the political groups in Gaza to demand Palestinians’ Right of Return to their native villages now controlled by Israel and to protest the dire conditions in Gaza.” The protests began on Land Day March 30 and are scheduled to end on al Nakba, May 15.

The chants were militant: “NYC, you will learn, that refugees will return!”; “Free, free Palestine! Long live the Intifadah!”; and “Resistance is justified, when people are occupied!”

There were protests March 31, especially in Tunisia, Turkey and Lebanon. More protests over the new Israeli massacre are expected the first week of April.