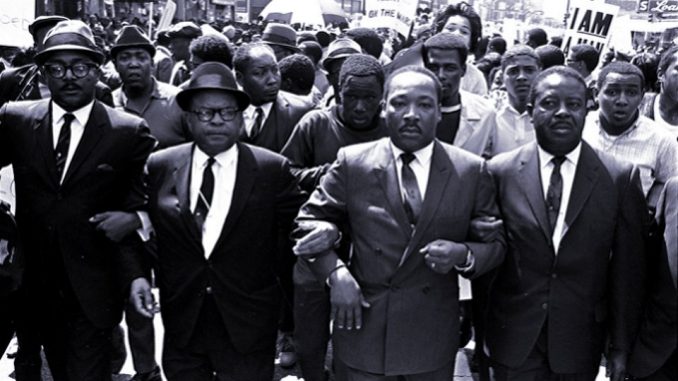 Following are excerpts from an April 11, 1968, WW article by Workers World Party founding chairperson Sam Marcy, a week after the assassination in Memphis, Tenn., of Rev. Martin Luther King Jr.

The rebellions which opened spontaneously upon the heels of the announcement of the assassination of Rev. King were so widespread that they had an almost universal character throughout the length and breadth of this land. The magnitude and depth of the uprisings were so great that President Johnson had to cancel his Vietnam conference in Honolulu to attend to the crisis here — a sure sign that, for the moment at least, the war of liberation at home took precedence over the war of liberation waged by the Vietnamese people abroad.

It is sufficient merely to remember that the storm of uprising engulfed 110 cities as of April 9, as revealed by the New York Times.

Nowhere in recent contemporary history has there taken place such a simultaneous and completely spontaneous rising as we witnessed last week. Its very scope and magnitude send terror and confusion into the camp of the ruling class. The very fierceness and boldness of the mass rising were the only real factors that stopped the government from unloosing as extreme a terror as it did last summer [when National Guard troops were used to put down urban uprisings in cities like Newark, N.J., and Detroit].

It must be remembered that many smaller cities did not report at all at press time. Many of them generally refuse to release the true number of arrests or injured except on official requests from higher authorities.

No matter how the bourgeois press will distort the real character of the events following the assassination, there are two fundamental aspects of these events which cannot be obscured by mere propaganda.

The first one is that the uprisings were not of an accidental character, or solely a protest at the murder of Rev. King, but were a general expression of the revolutionary momentum inherent in the liberation struggle. The King assassination crystallized and accelerated the tempo of the rebellions.

The second aspect of the rebellion is the implicit rejection of the theory of nonviolence as a method of achieving liberation. The ruling class could scarcely fail to notice this.

To the extent that more token concessions are made to the Black masses, they are to be regarded as a by-product of the struggle carried on by the masses, and not at all as concessions handed down from above to assuage the grief of the masses.

(It is plain for all to see that the passage of the current token civil rights bill in the reactionary House of Representatives by such a decisive majority is clearly a concession to the rebellions of the past week.)

Throughout the entire period until the burial of King, the ruling class so manipulated all of the important public events that aside from the rebellions themselves, there was no truly visible and significant independent expression of the Black masses.

Radio and television, press and pulpit, as well as outside gatherings, all of which were controlled by white bourgeois elements, monitored almost all public expressions of political sentiment. Few indeed were the independent, militant Black voices given the opportunity to be heard — except for short intervals and on rare occasions.

The very sight of Nixon, Rockefeller, Kennedy, Romney, Humphrey and the other pillars of imperialist racism at the funeral could not help but add insult to injury. The masses of the people were even deprived of having their own way of interpreting the events. No wonder the masses resorted to retaliatory force!

In the epoch of imperialist decay, force has been the only arbiter in great events. Not a single important contemporary world issue has been decided without it, and until imperialism is swept off the face of the earth, that is how it will invariably be. Peaceful methods for the solution of great problems as well as small will prevail and endure after the reactionary obstruction of monopoly capitalism and racist oppression are swept away by a proletarian revolution.