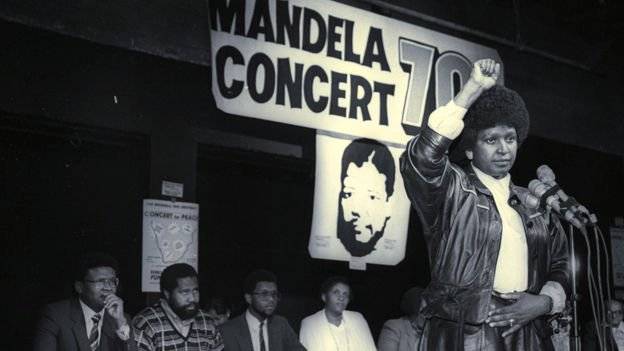 Winifred “Winnie” Mandela, a heroic freedom fighter in the South African anti-apartheid struggle, died at the age of 81 on April 2 in a Johannesburg hospital after a long illness. She was a member of South Africa’s parliament until her death.

She was an inspiration to oppressed women worldwide who joined the mass anti-apartheid solidarity movement, including this writer, who was a founding member of the U.S. Out of Southern Africa Network. That organization demanded U.S. corporations divest from the economy of the racist apartheid regime in the mid-1980s.

A memorial service for this “Mother of the Nation” will be held in South Africa on April 11. The official national funeral is scheduled for April 14.

“The ANC lowers its revolutionary banner in honour of the memory of this great woman who was so loved and revered, whose name will forever be inscribed in history as having played a formative role in the history of South Africa. We mourn the passing of this great patriot and Pan Africanist, whose resilience and courage inspired freedom struggles not only in South Africa, but across Africa and her diaspora.

“Such was her impact as an activist and revolutionary around the world that, until the very end of her life, she was lauded and acknowledged for her contribution to the struggles of all oppressed peoples of the world.

“Her early exposure to apartheid in the Village of Mbongweni, Bizana, in the Transkei, where she was born to Columbus and Nomathamsanqa Mzaidume Madikizela on 26 September 1936, inspired in her a lifelong hatred of injustice and racism. It was this early exposure, and later [her experiences] as a young social worker in Johannesburg, that set her on a lifelong path, joining the ranks of celebrated freedom fighters of the African National Congress and the broad liberation movement in the 1950s. She counted amongst her friends and inspiration at the time the likes of Lilian Ngoyi, Helen Joseph, Ma Albertina Sisulu, Florence Matomela, Frances Baard, Kate Molale, Ruth Mompati, Hilda Berstein and Ruth First.

“Comrade Madikizela-Mandela was an activist in her own right, and will be remembered for having stood at the forefront of the struggle for women’s rights in South Africa — taking part in a number of demonstrations against the unjust pass laws. When the ANC was banned in South Africa — and the mere mention of the organisation’s name could result in imprisonment — Mama Winnie and countless other dedicated activists kept the flames of resistance burning, speaking out against apartheid, against detentions without trial, against the pass laws, and against the brutality of the apartheid regime. For this she paid a heavy price.

“She was first incarcerated in 1958 and over the years would face many more such detentions and banishment including solitary confinement. Despite all these attempts to break her spirit, she remained steadfast and refused to cease with her political activism, displaying exemplary courage that made her a role model for many young women activists in South Africa.

Imprisonment, banning, harassment, house arrest, solitary confinement and having her husband and father of her children, Isithwalandwe Tata Nelson Mandela, imprisoned for 27 years, did not break Mama Winnie’s fighting spirit.

“We are grateful to her for having bequeathed us a lasting legacy and inspiration to serve our people.”

To read the entire statement, go to tinyurl.com/y7a7gvxs.