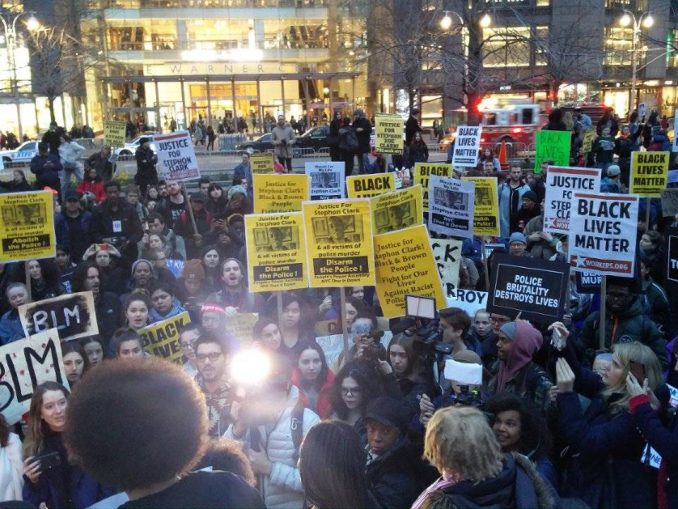 More than 1,500 people took the streets of New York City on March 28 to demand an immediate end to police terror and abolition of the New York Police Department. Protesters lifted up the name of Stephon Clark, a 22-year-old father of two who had been shot eight times by police in Sacramento, Calif., on March 18. He was killed in the backyard of his grandmother’s house, unarmed and with his back to the cops. His death is one more in a long line of Black lives murderously taken by police.

The march was organized by Workers World Party, the People’s Power Assembly and NYC Shut It Down. Four days earlier, organizers had raised the banner of Black Lives Matter at the NYC #MarchForOurLives and distributed 3,000 flyers about the March 28 protest to the many teenagers and adults marching against gun violence.

The U.S. is the world’s number one arms dealer. Large U.S. cities are more and more aptly described as occupation zones as cops equipped with body armor and assault rifles regularly attack Black, Brown and migrant youth. As capitalism grinds down to its dead end, the ruling class must deny the working class and oppressed any opportunity at revolutionary action and organizing — hence, the heavy investment in the police.

During the March 28 event, the NYPD brutally tried to crack down with scooters, bicycles, cars and even a helicopter, making 13 arrests. Many teenagers who had heard about the action from the anti-gun march expressed outrage. They brought homemade signs to the kickoff rally, held at Columbus Circle, co-chaired by members of WWP, PPA and NYCSID,  The rally featured speakers from Why Accountability and Swipe It Forward and was followed by the march, with filled the streets as it headed to Times Square.

So many people were outraged at another senseless and racist police murder that the NYPD did not have enough scooters and bicycles to contain the march. Despite brutal arrests, the people moved fast and held the streets for most of the march. Local, national and international media were present and moved with the march to Times Square, where youth held numerous clustered speak-outs before dispersing to do jail support.

This incredible show of force from the movement and the youth, mainly Black and Brown, showed that the Black Lives Matter movement is not abating but is clearly reproducing itself. Some who had been only eight- years-old when Trayvon Martin was murdered were militantly marching for him, as well as for Eric Garner, Sandra Bland, Stephon Clark and all Black lives taken by racist police.