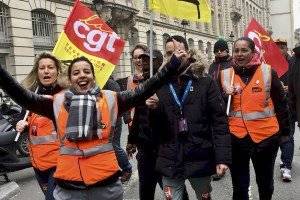 Faced with layoffs, downsizing and privatization of public services, public workers in France numbering in the hundreds of thousands held a countrywide protest on March 22. Many railroad workers stayed off the job and announced a series of off-and-on strikes throughout the spring. Some teachers and workers in government administration also struck, as did air traffic controllers.

The mass protest opened a defensive action against the so-called “reforms” President Emmanuel Macron and Prime Minister Édouard Phillipe plan to put into effect, with little discussion in parliament. They want to cut more than 120,000 jobs in the public sector over the following four years and to transform the state-owned railroad company, the SNCF, into a private company traded on the stock market. The 149,000 railroad workers would lose their protected civil servant status, subjecting them to layoffs.

According to a report on the website of the Pole of Communist Revival in France (PRCF), there were 65,000 demonstrators in Paris, of whom 15,000 were high school students; 55,000 in Marseille; and thousands in each of two dozen smaller cities in various parts of the country. In some places, police attacked the demonstrators with tear gas.

The struggle unites the interests of all public workers with the entire working class, all of whom require public services, including health care and education as well as transportation.

Macron, closely connected to the big French banks, was elected president last year by a large margin. His party, which was newly created to support his election, also won a strong majority in Parliament. This puts his ruling-class grouping in a position to pass laws easily. The only way to stop him is by stopping work and taking to the streets.

Railroad workers plan to follow a schedule of two days of strikes followed by three days of working from April 3 to June 28. Other public workers are expected to also strike.