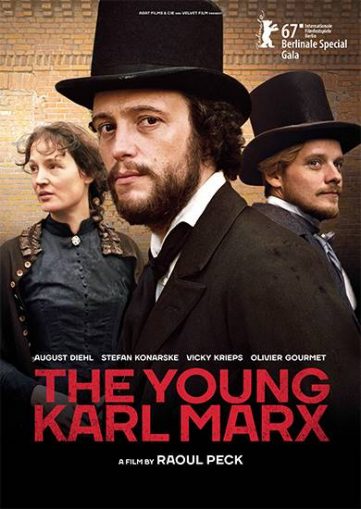 Director Raoul Peck’s latest film, “The Young Karl Marx,” portrays Karl Marx, the philosopher, writer and revolutionary. This dramatic narrative sympathetically depicts the early life of the man inspired by the struggle of the workers and exploited masses against the crushing forces of the old monarchies as well as the capitalist class, which emerged first in England with the Industrial Revolution.

The fire in Marx’s pen came from a burning desire to change the world, to defeat a “system that naturally produces poverty” (to quote the film character’s speech to a gathering of craft workers in Paris) and build a new world.

Born in the German city of Trier on May 5, 1818, Karl Marx was the revolutionary thinker and activist who championed the cause of the working class, the proletariat, against the capitalist class — the bourgeoisie — that oppresses them. He co-authored “The Communist Manifesto” (1848) with fellow German revolutionary Friedrich Engels and wrote his colossal study “Capital” (unfinished by the time of his death on March 4, 1883), forever changing the world with his analysis and call to arms in the struggle between these classes. Since Marx’s death, the capitalists have tried to keep his message buried with him. “The Young Karl Marx” shows why their efforts to suppress Marx have failed.

The film follows Marx through the years 1843-48, a five-year period when a number of events helped shape him as a revolutionary and informed the nature of his writings. From Prussian police shutting down the office of the newspaper edited by Marx (Rheinische Zeitung) to his exile in Paris, from his meetings with fellow revolutionaries (most notably friend and future collaborator Engels), and his early studies of economics to the founding of The Communist League in London (formerly The League of the Just), the film shows audiences the formative years of Marx’s theory and actions in the struggle for international revolution at a time when revolutionary fervor was sweeping Europe.

Showing the personal and financial struggles of Marx, his relationship with family and friends, “The Young Karl Marx” paints the picture of an honorable human being who dedicated his life to the proletariat, advancing scientific socialism. In a moment of epiphany dramatized in the film, Marx draws the following conclusion on his role: “Until now, philosophers have simply interpreted the world. Yet it must be transformed.”

The cast of “The Young Karl Marx” features August Diehl (Karl Marx), Stefan Konarske (Friedrich Engels) and Vicky Krieps (Jenny Marx, Marx’s spouse and comrade), all of whom deliver powerful performances. Each actor convincingly demonstrates the outrage and hope of the characters they portray: the outrage against the injustices perpetrated against humanity in the interests of capital and the hope that humanity will unite to overthrow the system perpetuating the injustice.

For example, Jenny says to Engels, “Happiness requires rebellion. Rebellion against the establishment, the old world. That’s what I believe. And I hope to see the world crack soon.” There is fiery conviction in the delivery of this line (as with the rest of the dialogue), which can be read in her facial expression and tone of voice. To make such performances convincing, audiences are offered a glimpse into the world witnessed by the characters, one of contrast between the rich and the impoverished.

Filmgoers get to see the brutal treatment of workers in textile mills, the squalid living conditions they are forced to endure and horrors such as child labor. While many toil in the hell of poverty (their labor produces wealth), a select few live idly in the lap of luxury (although they produce no wealth themselves). The film captures the environment which motivates the real-life Karl, Jenny and Friedrich.

The film concludes in 1848 with Marx and Engels writing and publishing “The Communist Manifesto,” which has since become the most influential document in world history, with its thundering proclamations and sobering insight. Passages from “The Manifesto” are narrated over images of workers who would gain from the goals put forward by Marx and Engels, including: “The history of hitherto existing societies is the history of class struggles. Society is splitting into two great hostile camps, into two great classes that confront each other — Bourgeoisie and Proletariat.”

As Marx says to craft workers early in the film: “Nothing lasts. All social relations — slavery, serfdom, salaried work — are historical and transient. The truth is, current conditions must change.”

“The Young Karl Marx” (“Le Jeune Karl Marx” in the original French) is a European co-production produced by Peck’s company, Velvet Film. Born in Haiti, Peck, who also co-scripted the screenplay with Pascal Bonitzer, has produced a lengthy filmography of works with political significance. This list includes the acclaimed documentary on African-American writer James Baldwin titled “I Am Not Your Negro” (2016) and the dramatic narrative “Lumumba” (2000), based on the life of Congolese independence leader Patrice Lumumba.

Peck described his inspiration for bringing this important period of Marx’s life to the screen in a press release from the film’s distributor, The Orchard: “A few years back, while the world was going through yet another financial crisis, I felt the need to go back to the basics: The analysis of the violent capitalist society we are still embedded in, through these three young Europeans of wealthy families (Karl, Friedrich and Jenny) who decided to change this utterly unequal world. And they eventually did; though not the way they imagined it.”

To condense this intense period of Marx’s life in a roughly two-hour film is a daunting task, especially when trying to convey the simple yet complex ideas of Marx and his comrades. However, Peck and the crew behind this effort successfully achieve this goal. “The Young Karl Marx” is a stunning cinematic offering whose time has come. As class struggle continues to escalate across the globe, the message of Marx is as timely as ever: “Workers of the world, unite!”