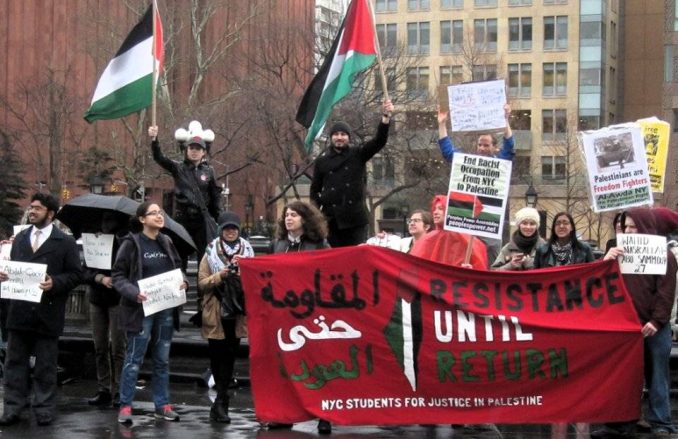 Workers World Party condemns the brutal massacre of peaceful Palestinian protesters by Israeli occupation forces in Gaza on March 30. We stand with the Great March of Return and the right of all Palestinian people to return to their stolen homeland.

We hold the U.S. government, which arms and funds the Israeli war machine, responsible for today’s massacre and for 70 years of massacre against the people of Palestine.

At least 16 Palestinian civilians are confirmed dead and 1,416 injured, according to the Gaza Ministry of Health. Israeli snipers targeted unarmed marchers while drones dropped tear gas from above. A young man was shot while praying. A farmer working his field was murdered with a tank shell.

These murders by the racist occupation army are as cowardly as the murders of Stephon Clark and so many more unarmed Black people by racist U.S. cops. They show how much the Israeli apartheid regime fears this united action of all Palestinian political factions and sectors of society.

Israel is part and parcel of the U.S. military-industrial complex, receiving more than $3 billion in annual direct military aid, nearly three times as much as the next highest recipient, and billions more by other means. Since its founding, Israel has served as both a military base and a bastion of white supremacy for U.S. imperialism in the Middle East, serving the interests of U.S. oil corporations.

The standard-issue weapon of the Israeli army is the M16, made in South Carolina and provided free to Israel by the Pentagon. This is the fully automatic version of the AR-15, the assault weapon widely condemned for its role in the Parkland school shooting and other mass shootings in the U.S. Yet neither Trump and the Republicans nor the Democratic Party opposition objects to providing these weapons to gun down Palestinian children and their families.

The U.S. president’s unilateral decision to move the U.S. Embassy to Jerusalem was an act of incitement aimed at escalating the genocide of the Palestinian people and futhering the theft of land by Zionist settlers, many of whom come from the U.S. Meanwhile, the people of Gaza, 70 percent of them refugees, are living through their 11th year of total blockade. Gaza is the world’s largest open-air prison, where nearly 2 million people are kept under siege, denied the right to medical care, education, drinking water and electricity.

Most people in Gaza are the children and grandchildren of refugees driven off their land a few miles away, in what are now Israeli cities and resort towns like Tel Aviv and Herzliya. Their labor built many of the luxury hotels and condos that now line the Mediterranean shore. U.S. hotel chains and developers claim to own much of the land that rightly belongs to expelled Palestinians. U.S. firms also help plunder natural gas from beneath the waters of Palestine.

On March 30, Palestinians were commemorating the 42nd anniversary of Land Day, when six Palestinian protesters were gunned down by Israeli forces in 1976, as they were protesting the Israeli government confiscation of Palestinian land. The Great March of Return will continue until May 15, the 70th anniversary of the Nakba — “the disaster” — and the creation of the racist settler state of Israel.

As revolutionaries living in the belly of U.S. imperialism, we vow to do everything in our power to disrupt Washington’s military, economic and political support of the Israeli apartheid regime. We stand shoulder to shoulder with the people of Palestine and their just struggle to end the occupation.

End all U.S. aid to the racist state of Israel!