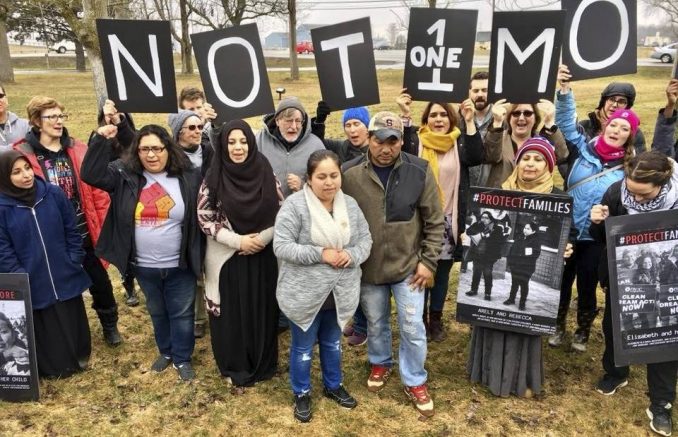 “We will not be caged!” was the rallying cry against deportation of immigrant women and children in upstate New York on March 28. Caravans of protesters from Rochester, Syracuse and New York City converged on the Immigration and Customs Enforcement federal facility in Batavia, N.Y.

The March rally celebrated Women’s History Month with this action for justice. Organizers were the Workers’ Center of Central New York, the Worker Justice Center of New York and the New York Immigration Coalition “in solidarity with the women in our communities that are being further criminalized and attacked by [the Trump] administration.”

Protesters were fighting in particular against the deportation of Arely Tomas Orozco due for an in-person check-in with Batavia ICE that day. Orozco is a fierce advocate and community leader for workers. The mother of three children who are U.S. citizens, she lives with her family in Syracuse, while also helping take care of family in Guatemala.

Orozco was turned in to the U.S. Border Patrol by N.Y. State Police in 2013 when she and her partner, Hector Navarro, lacked a license while driving. The WCCNY has a Green Light NY/Driving Together! campaign underway to expand access to drivers’ licenses regardless of immigration status. (tinyurl.com/ybmvsjeq)

Navarro, who was detained in Batavia from December 2017 to February 2018, witnessed how that detention center, which houses the majority of immigration detainees in upstate New York, expanded to include women, with the number of female inmates rising since the fall.

A statement by organizers said: “Immigrant women in upstate New York for years have faced incredible isolation and discrimination, [including] discrimination at the workplace. Border Patrol’s close relationship with local law enforcement and the lack of a driver’s license … forces them to break the law to be able to meet their basic needs. Despite this criminalization and constant risk, they continue to be a vital part of our communities by playing a crucial role in the state’s dairy industry, and being at the forefront of the fight for drivers’ licenses for all.”