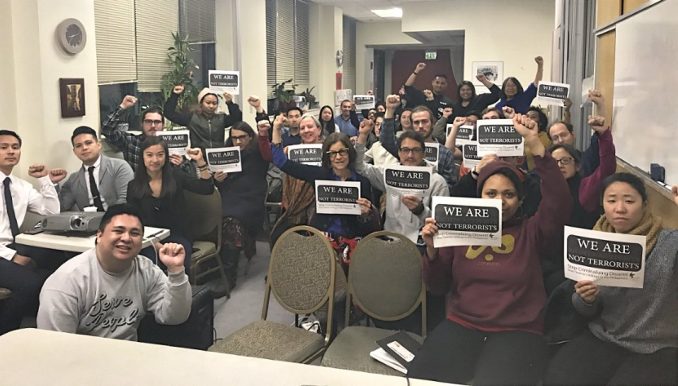 Members of the Filipino community in Boston, with their allies, heard informative talks given by members of ICHRP-US and BAYAN-USA, a coalition of Filipino organizations in the U.S. Then they broke into small groups to discuss the situation and create strategies to build local solidarity with the people of the Philippines. The meeting ended with a dynamic spoken word performance by Vijou Bryant, otherwise known as MC Baka.

The meeting highlighted the fundamental role U.S. imperialism has played in creating and supporting Philippine president Rodrigo Duterte’s “Three Wars,” which, since June 2016, have led to over 13,000 deaths through government-sponsored extrajudicial killings.

Bernadette Ellorin of BAYAN-USA described the history of colonialism and neocolonialism in the Philippines. The Philippines is the fifth most mineral-rich country in the world, mostly concentrated on the island of Mindanao, where, according to Ellorin, “The poorest people sit on the greatest riches in the Philippines.” In addition to its natural resources, the Philippines is located in a strategic position in the Asia-Pacific region: Most trade routes between Eastern and Western global hemispheres pass through its islands.

Originally colonized by Spain, the U.S. seized control of the Philippines after the Spanish-American War, when the islands were “transferred” to the U.S. by the 1898 Treaty of Paris, along with Cuba, Puerto Rico and Guam.

The Philippines gained nominal political independence in 1946, but U.S. economic and military interests continue to dominate the country. Today, the Philippines receives millions of dollars in U.S. military aid, including new drone bases, and has granted virtually unlimited access to U.S. so-called counterterrorism missions. U.S. firms like Dole and Del Monte control most economic activity on the islands, a phenomenon Ellorin described as “militarism for plunder.”

Ellorin’s talk highlighted the three wars Duterte has been waging on the people of the Philippines. The first is the drug war, which has killed over 13,000 people and forcibly displaced hundreds of thousands more. It targets low-level dealers and users, while leaving untouched the organized crime syndicates and oligarchs who profit from the drug trade. The second war is the so-called war on terror, which, much like its U.S. counterpart, is justified through “hyper-Islamophobia” and used to target the Moro, a group of Indigenous people of Mindanao who have historically resisted Christianization and foreign dominance.

The third war is the so-called war on the opposition. Under the guise of combatting the New People’s Army, which has been engaging in armed resistance to the U.S. puppet government since 1969, Duterte has begun arresting striking union leaders as “rebels” and labelling any popular dissent as a front for the Communist Party. Recently, an escalating number of peasant and Indigenous leaders have also been found dead as Duterte’s repression of all dissent intensifies.

Pam Tau Lee of ICHRP-US reflected on her recent fact-finding mission to the Philippines, specifically to the island of Mindanao. She described a six-year-old girl, who is already a “tested leader,” directing other students in chants as the Department of Education tries to decertify hers and other Lumad Indigenous schools.