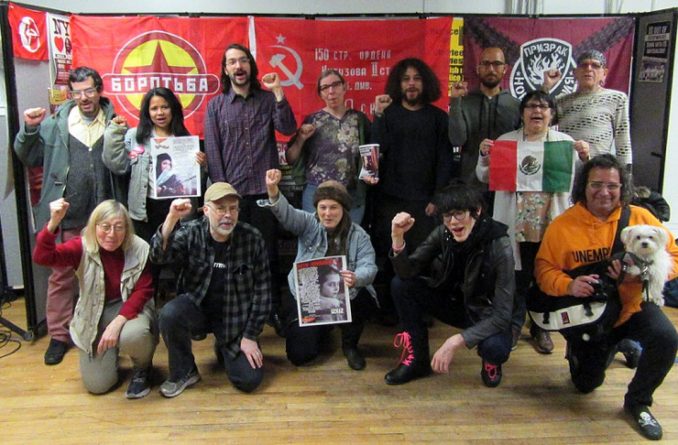 Part of audience at film showing.

It’s been four years since a far-right junta supported by Washington seized power in the former Soviet republic of Ukraine and began a war of extermination against the people of the Donbass mining region bordering Russia. On March 18, a film showing was held at the Solidarity Center in New York to shed light on this crisis and efforts to build solidarity.

Introducing the films, Kayla Popuchet of Workers World Party explained, “The eastern Ukrainian region of Donbass has made a militant resistance to the fascists, as they are composed of working-class folks who hold anti-fascist beliefs. In the U.S. we do not hear about the war going on in Ukraine because our bourgeois media do not want us to be aware of what the government here is supporting. It is more convenient for them to silence the resistance. But with us, their words and struggles are alive. We see you, we hear you, and we love you.”

The first film shown, “Ukraine: Masks of the Revolution,” by filmmaker Paul Moreira, caused a scandal throughout Europe when it was broadcast on French television in 2016. Moreira exposed the role of neo-Nazi gangs in Ukraine’s so-called “revolution of dignity”; the massacre of anti-fascist activists in Odessa on May 2, 2014; and the role of U.S. and European officials in covering up their crimes. The Ukrainian government tried to have the film banned.

Commenting on Moreira’s film, Greg Butterfield, coordinator of the International Action Center’s work in solidarity with Ukraine and Donbass, said: “Two things really stand out to me. First is the similarity of the actions by the fascists in Ukraine to the white supremacists who attacked Charlottesville last year, including how they try to justify themselves to the media. And second, the U.S. war drive against Russia didn’t start with the allegations of ‘election tampering’ in 2016. It has been building for a long time, under both Democratic and Republican regimes.”

After the Moreira film, “Banda Bassotti: The International Brigade” had its first public showing in North America. The film documents the history of the Italian revolutionary music collective Banda Bassotti and several international solidarity caravans the group has organized, since the 1980s, to Nicaragua, El Salvador, Palestine and other locations. This year Banda Bassotti is organizing its fourth Antifascist Caravan to Donbass, which will bring humanitarian aid and political solidarity to the people of the besieged Donetsk and Lugansk people’s republics.

The film showing attracted many young people, as well as veteran activists, who participated in a lively discussion afterward. They enjoyed homemade borscht (beet soup) and kasha (buckwheat porridge). More than $200 in donations was collected to support the next Banda Bassotti Antifascist Caravan to Donbass.

Activists also announced plans to participate in the upcoming anti-war spring actions set for April 15 in many cities across the U.S. and to hold a protest in New York on May 2, the fourth anniversary of the Odessa massacre.