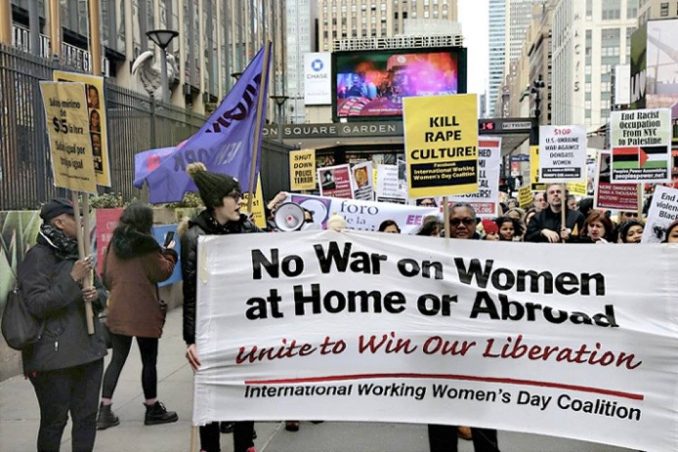 This is the slightly edited version of a talk given at a Feb. 3 forum, “Women and the Struggle for Socialism,” hosted by Workers World Party in New York City.

In 1969, the catalyzing of the LGBTQ movement during the Stonewall Rebellion made drag queens, trans women and the gender nonconformity of the gay community visible worldwide for the first time. These oppressed peoples, and the new, radical movements that they founded in the rebellion’s wake, were primarily seen by bourgeois, reactionary forces at the time as a threat to gender norms, to the nuclear family and, ultimately, to the stability of capitalist society. These perceptions were, in one way, correct.

Trans and gender-nonconforming people today embody a contradiction — a contradiction between the sex we were assigned at birth and ourselves. Bourgeois ideology tells us that assigned sex is a simple biological fact, immutable and eternal.

That absolute definition of the gender binary forms the basis of the gendered division of labor, which attempts to divide the entire human race into producers and reproducers. This division lies at the heart of class society and is embodied within the capitalist construction of the modern nuclear family.

This simplistic system, however, contradicts actual biology. Soviet medical scientists as early as the 1920s had remarked that human sexual difference was not binary but, in fact, infinite. This had been evidenced socially by the worldwide prevalence of multigendered societies throughout pre-colonial history.

Through our existence, trans people have proved this entrenched system of gender to be fallible. By demonstrating that there is no inherent difference between people of different genders, transness can be used as a weapon against capitalist ideology and cut a way towards a more complete and accurate understanding of gendered oppression.

However, the path to our liberation wasn’t always so clear and has certainly never been light on obstacles. In the wake of Stonewall, the bourgeois state had its own answer to trans visibility: medical stigmatization and criminalization.

By labeling homosexuality and gender dysphoria as disorders for diagnosis, lesbian, gay, bisexual and trans people were socially “otherized.” Gender dysphoria still stands in the most recent edition of the Diagnostic and Statistical Manual of Mental Disorders (DSM), as published by the American Psychiatric Association

This stigmatization was used to explain away the differences between the “queer” and the “ordinary” as inherent differences in the form of disorders to be treated, giving trans people a tremendous hurdle to clear to social acceptance. At the same time, laws against men “impersonating women” were enforced by the police, giving the state free rein to arrest trans women. This was an attempt to protect no individual, nor even private property, but to maintain the ideology of assigned gender in the minds of the people.

These were the formal grounds of our exclusion from society, and could be described as attempts at the confinement of trans people and the growth of our communities through bourgeois medicine and law. It was obvious that trans people were being treated as a threat, but the exact nature of the threat we posed was difficult for even us to discern.

The trans movement struggled for recognition in order to stay alive and to achieve social and legal change, but in many ways it was limited by its lack of historical context. Trans people could understand their own oppression perfectly well, but for many decades there was no theory or history explaining the place of our struggle in history or in the present world, nor the significance of understanding and combating gendered oppression as a whole.

Regardless, trans people at the time sought to organize around their shared oppression, building their own organizations, such as Street Transvestite Action Revolutionaries (STAR), and seeking to unite with the other movements to which they belonged.

Overwhelmingly, trans women could find no respite in the women’s movement of the 1960s and 1970s. Ideological currents within the growing radical feminist movement were dominated by theory which essentialized the root of women’s oppression to biology, taking the supposedly universal genetic differences between the two sexes as their starting point instead of social relations, which, according to them, followed.

This view, as Marxist analysis makes clear, reinforces the institution of the gender binary, legitimizing the same fundamentally sexist ideology it claims to oppose. Radical feminists actively waged a culture war against the transgender community and its activists, publishing works on how trans women who transitioned “appropriated womanhood” and reinforced patriarchal gender roles, and asserting that trans women sought to divide the women’s movement against itself.

Meanwhile, the liberal feminist movement found itself unequipped and unwilling to deal with any controversial issues that would obstruct its goal of “equality” through the further incorporation of women into capitalist production and the bourgeois state.

Finally, in the 1990s, the trans community received the theoretical leap it needed in the work of our late comrade Leslie Feinberg, who wrote extensively on gender and gender nonconformity throughout world history, from the perspective of historical materialism. Hir work explained how matriarchy, homosexuality and gender nonconformity were challenged and dominated by patriarchy at the advent of class society, how trans oppression was foisted onto the world by European colonizers and how the trans struggle was advancing in present-day socialist Cuba.

At the same time as this Marxist view on trans liberation was being made concrete, a tendency was beginning to grow within the liberal feminist movement that sought to appear inclusive of racialized people, LGBTQ people and disabled people. This shift in order to win over young progressive women has continued to the present.

It has since become widely accepted within liberal feminism that Black women, Brown women, lesbians, trans women and disabled women should be made a part of that contemporary movement. Their use of terms such as “intersectionality,” a concept developed by Black feminists which attempts to connect different forms of oppression, is an example of the liberal tactic of adopting the guise of diversity and progressive ideas in order to broaden its appeal.

But this inclusion is superficial in a liberal tendency with only its own interests in mind. The women whose primary political interest is putting a fellow white woman in the White House have nothing to offer multiply oppressed women whose needs are far greater and weigh far heavier.

It is relevant that this process occurred concurrently and not coincidentally with another such shift within the Democratic Party itself, with a platform aimed at increasingly disenfranchised progressive youth. The Democrats are also responsible for a noticeable push from the existing state as an entity to achieve the visage of “inclusiveness,” starting in the 2000s with cisgender LGB people, and more recently with trans people. As a result, the very state that once arrested trans women for walking the streets of Manhattan, now employs trans people as public servants and even as soldiers and police officers.

This dichotomy demonstrates perfectly the choice available to trans people in the U.S. at present: either assimilation or liberation.

The prospect of assimilation into a white supremacist, patriarchal, capitalist society appeals to some trans people, just as it did to lesbian, gay and bisexual people, and to cis-heterosexual women before.

But assimilation is not enough for the trans community which is still struggling, racialized and nonconforming; who are still bound to the same cycle of poverty through the same means of economic oppression that the warriors at Stonewall were; who still rely upon sex work and who still find themselves homeless. Nor will assimilation do for anyone who is sincerely devoted to the interests of trans people.

Trans people must wield gender as an ideological weapon against patriarchy, and thereby against white supremacy, imperialism and capitalism. If they do not, they will wield it first and foremost against their own kind.

Furthermore, any organized movement which seeks to support the trans struggle must recognize and understand our unique position in the struggle against gendered oppression, and must not essentialize, delegitimize or tokenize trans and gender-nonconforming people.

This is the movement we must continue to build here and around the world.

This is why we say: Stonewall means fight back!