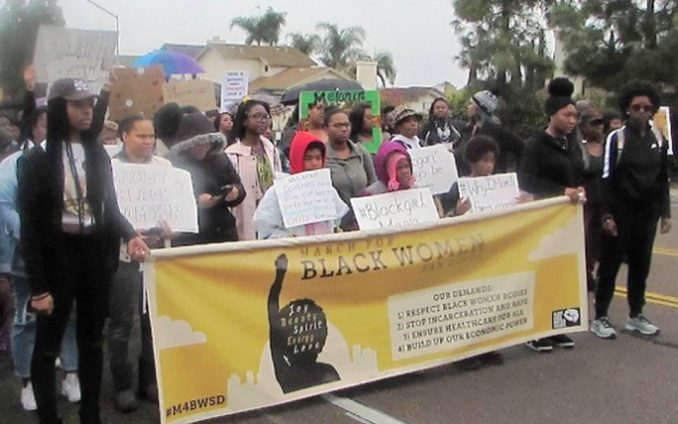 San Diego — Over 300 people showed up on March 10, in overcast, rainy weather, for the “Black Lives Matter: March for Black Women.”  The march was organized and led by Black women for Black women, with individuals and grassroots organizations coming to support and show solidarity.

Sister Karen of the Kumeyaay nation began the opening rally with a prayer, followed by Nyisha Geedoubleu, who gave the background story on “why we march.”

Nyisha Geedoubleu read a list of four demands, while a condensed version of the demands was listed on the lead banner.  She introduced the speakers, courageous women who told compelling, truthful, heartfelt stories of survival that touched issues partially summarized in the first demand: “Acknowledge and challenge centuries of abuses that are still happening today, including sexual violence and reproductive violations against Black bodies, especially the brutalization of trans women, Black girls, all Black Womxn.”

The march began at the corner of Logan and Euclid avenues with the sisters from the Kumeyaay nation in the lead, and ended at the Malcolm X Library with a closing rally. The beautiful banner was held by Black women, followed by hundreds of people — all colors, all ages, nationalities, faiths, individuals, couples, families — and an array of signs, banners and colorful umbrellas.

Marchers chanted, “Say their names!” as the names of Black women killed, brutalized, detained and jailed were spoken. Marchers took up half of the four-lane street, stopping traffic as people from the community joined.

The overall message repeated throughout the march and closing rally was  “We are strong, beautiful Black Womxn and we demand respect and trust.”

The Brown Berets provided security and the Kumeyaay sisters provided medical attention to anyone in need.