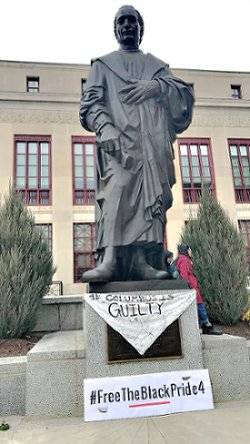 Rally for Black Pride 4 finds both Christopher Columbus and the city of Columbus “guilty!”

A large multinational crowd gathered on March 12 in front of the Columbus, Ohio, city hall in solidarity with the Black Pride 4. The event, organized under the leadership of Black Queer and Intersectional Columbus (BQIC), raised the demand to Free the Black Pride 4, who had been arrested at Stonewall Columbus Pride in June 2017. The demonstration featured speakers from BQIC, Get Equal, People’s Justice Project, and International Socialist Organization. Members of Workers World Party attended the event in solidarity.

The Black Pride 4 had been assaulted and arrested for briefly disrupting Columbus Pride in order to protest systemic racist police violence and violence against trans people of color. The Stonewall Columbus organizers had consistently refused to create space for Black trans and queer voices, as well as refusing to listen to safety concerns of queer, trans and intersex people of color (QTIPOC) as the organizers worked with Columbus police to carry out their event. Stonewall Columbus organizers continued to work alongside the state by testifying against the Black Pride 4 in court.

The fact that none of the three will serve jail time is a partial victory. The struggle continues as Deandre, who faces felony charges, has yet to go to court.

Columbus Community Pride is now being organized for 2018 in order to highlight voices of QTIPOC and take the police out of Pride. The event description also states it will be free of the capitalistic influence of corporate sponsorships seen at Stonewall Columbus Pride events. For more, go to: columbuscommunitypride.org/

Please donate toward legal fees and care costs of the Black Pride Four at: www.youcaring.com/blackpride4ashleywriplydeandreandkendal-852184