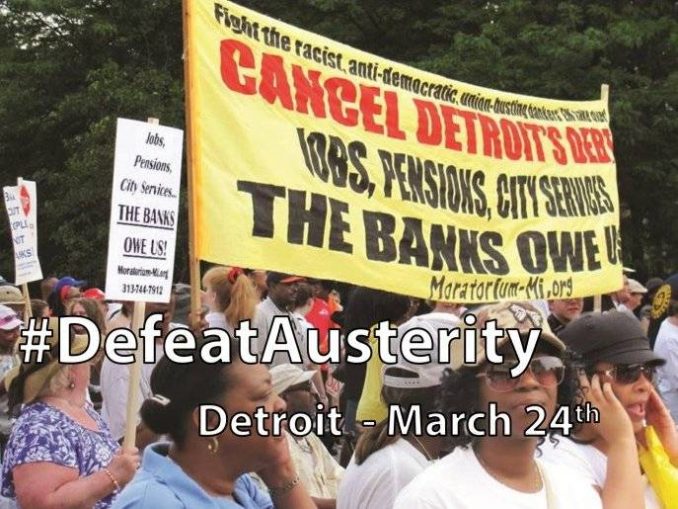 Organizing is in high gear for the National Conference to Defeat Austerity taking place March 24 in Detroit.

Youth organizer Mond Jones told Workers World some of the perspective behind this important gathering, which will have an international focus: “Austerity is one of the concrete ways capitalism and white supremacy manifest themselves against the people. Austerity is a term used to describe policies that aim to reduce government deficits by budget cuts and tax hikes on the poor. These budget cuts attack things like education and public health first and foremost.

“Every day in Detroit we see the effects of austerity in practice. We see it in the mass water shutoffs that have swept the city for years. Thousands of families lose water over petty delinquencies, while corporations rack up hundreds of thousands in unpaid water bills without penalty.

“Detroit is under attack. But not just Detroit. We see the same austerity in Puerto Rico and all over the world. We see it anywhere there are oppressed people, anywhere the banks and the billionaires work together to line their pockets and keep workers under.”

The conference will include a panel on the history of the deliberate targeting of Detroit by the banks and corporations because of its leading role in the Black liberation struggle as a result of the concentration of revolutionary African-American workers in the auto industry.

A highlight of the conference will be an international panel featuring Ricardo Santos Ramos, former president of the Electrical Industry and Irrigation Workers Union (UTIER) of Puerto Rico. The panel will also include talks on austerity and the struggle in Lebanon and Palestine, the Philippines and a report from Venezuela.

Presentations will explain how austerity reflects the direct imposition of rule by finance capital to ensure its profits at the expense of wages, pensions and benefits for the working class.  An analysis of the Trump tax plan and Pentagon war buildup, which will lead to the virtual destruction of what little remains of the social safety net, will be discussed.

Workshops will be held on fighting water shutoffs; stopping foreclosures; education cuts; the Poor People’s Campaign; and the mass incarceration of youth and proliferation of prison labor.  The Southern Workers Assembly will lead a workshop on the growing strikes and fightback by public workers, especially in the South, as witnessed in West Virginia with the teachers’ strike.

A special workshop on understanding and reading financial instruments will be led by Maurice B.P. Drew, co-executive director of the Refund America Project, the preeminent organization studying Wall Street bond refinancing and extortion against the working class. RAP research has been used by organizations fighting the banks’ robbery in Detroit, Puerto Rico, Chicago and elsewhere.

Action proposals will be on the agenda, including participation in the Poor People’s Campaign, May Day and demonstrations against the ongoing tax foreclosures and water shutoffs in Detroit.

The conference will start March 24 at 10 a.m. at historic St. Matthew’s-St. Joseph’s Episcopal Church, 8850 Woodward Ave. Following that, there will be dinner and an evening of cultural presentations. To register go to moratorium-mi.org. For more information, see the Facebook event at tinyurl.com/ycx68v2s; on Twitter @DefeatAusterity; or contact [email protected]