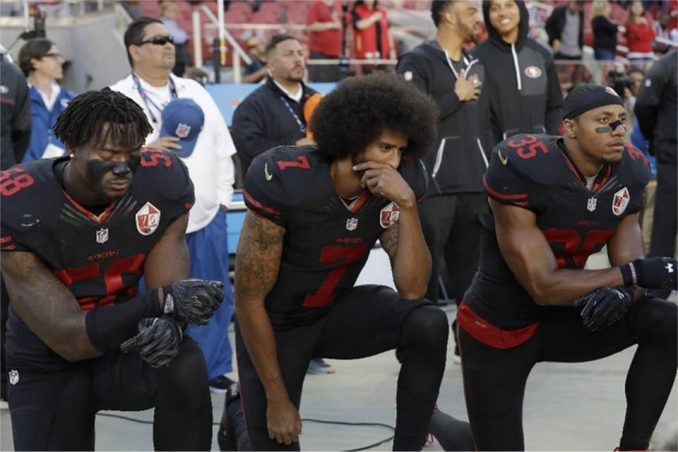 My son Jeremiah Boykin called me from school on Friday, Feb. 16, to tell me that he was dismissed from class because he did not stand for the pledge of allegiance. His constitutional rights were violated. He was verbally and almost physically assaulted by the person supposed to teach him anatomy.

The teacher, a Mr. Himes, showed anger and hostility while shouting: “My father fought in the war for the anthem. Respect the anthem! Do you understand?” while pointing in my son’s face to the point where he was scared and had to back up.

People think we don’t like the song, and that is true! It doesn’t match up with most Black people’s lives in America, where Black children and adults young or elderly are shot down by police who act as judge and jury on behalf of the system of racism and the thin blue line.

I say: No more abuse that whittles away at you to make you feel ashamed to be Black. It is my duty to take on the system for my Black children. They don’t know their own strengths yet. I am here to tell the world that you are worthy, loving, charismatic, smart and a pleasure to raise.

I propose taking police out of the schools to stop the school-to-prison pipeline. Give the extra money in pay to the teachers and set up proper vetting of these teachers so that every Black child can get a proper, dignified education.

Sit out the pledge of allegiance. The Supreme Court of the United States, in West Virginia State Board of Education v. Barnette, 319 U.S. 624 (1943), already stated you have this right:

“If there is any fixed star in our constitutional constellation, it is that no official, high or petty, can prescribe what shall be orthodox in politics, nationalism, religion, or other matters of opinion or force citizens to confess by word or act their faith therein.

“We think the action of the local authorities in compelling the flag salute and pledge transcends constitutional limitations on their power, and invades the sphere of intellect and spirit which it is the purpose of the First Amendment to our Constitution to reserve from all official control.”

Colin Kaepernick kneeled during the nationnal anthem to shed light on the fact that our Black children are being killed and beaten down by police. He is now a vilified person by the white media and masses and has been targeted by the NFL for exercising his constitutional rights while Black. He is now blacklisted by the NFL.

I stand with Colin Kaepernick and Jeremiah Boykin. Both asserted that the actions of whiteness and white America caused them to sit out the anthem.

Fighting racism is not a crime. My daughter Takiyah Thompson proved that, when all charges were dropped against her for allegedly taking down a Confederate statue in Durham. Racism in schools and elsewhere is the true crime. Teachers who carry out acts to demean and demoralize young Black people are the true criminals that must be dealt with swiftly.