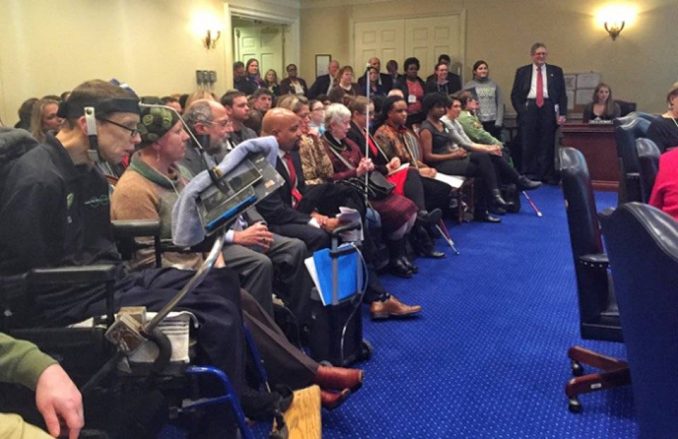 At hearing in Maryland on subminimum wage Feb. 10.

“Workers who experience disabilities are valued members of Alaska’s workforce,” Greg Cashen, acting commissioner of Labor and Workplace Development said. “They deserve minimum wage protection as much as any other Alaskan worker.” (alaska-native-news.com, Feb. 19)

Paying subminimum wages to disabled workers has been standard practice in the United States since 1938. Although the Fair Labor Standards Act has been amended many times, its provision that allows employers to pay subminimum wages to people with disabilities, as well as to prisoners, immigrants and domestic workers, to name a few categories, has never been changed.

The National Federation for the Blind and the Autistic Self Advocacy Network have long advocated changing the subminimum wage provision.

“The Fair Labor Standards Act fails to provide training or employment.” They quote data that shows that fewer than 5 percent of workers in sheltered workshops will transition to competitive integrated work. That means 95 percent of the people working in subminimum wage work will spend their entire working life in these facilities.

Kaessinger is a wheelchair user and disability rights activist.