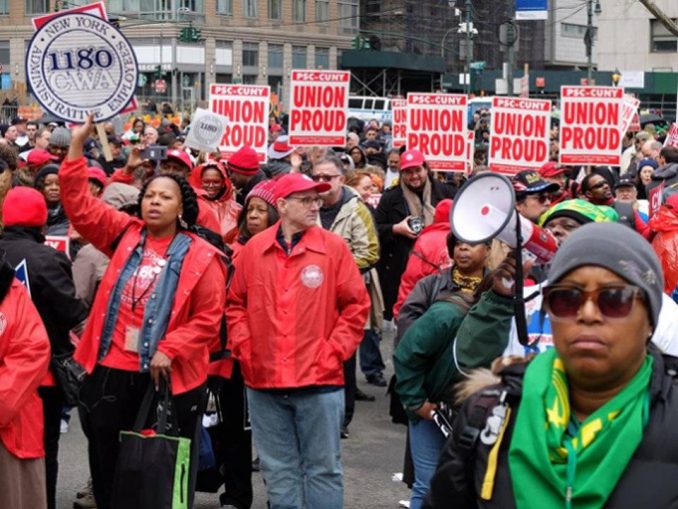 The U.S. Supreme Court heard arguments Feb. 26 on the Janus v. AFSCME, Council 31 case. A decision, expected by June, threatens to overturn a 1977 SCOTUS decision that defended the right of public sector unions, such as the American Federation of State, County and Municipal Employees, to collect dues from nonmembers represented by the unions.

These nonmembers receive the same collective bargaining, economic and medical benefits as dues-paying members. Thus a decision against automatic collection of dues from all workers weakens the ability of public worker unions to do their job.

Since the Janus case is an attack on labor, Black people, women and all workers, it should be no surprise that Trump — the racist bigot and misogynist in chief, called “45” in disgust by many union members — is supporting Mark Janus, the public employee in Illinois who brought the suit against the union. The Trump administration’s Department of Justice filed a brief in support of Janus, alleging that Janus’ First Amendment free speech rights were violated.

Trump’s appointment of reactionary justice Neil Gorsuch to the court was aimed at establishing a reactionary majority. This majority can override the March 29, 2016, Friedrichs v. California Teachers Association 4-4 deadlocked SCOTUS decision, an earlier version of the case on the same issues.

#45 is joined by the National Right to Work Movement, which stepped up its campaign to turn back the clock on labor rights in this case. “Right to work” is a Big Lie, made in the U.S., with its roots in the racial brutality of the Jim Crow South and a pretext to pass off anti-union legislation as free speech.

But workers’ leaders have answered this Big Lie. On  Dec. 8, Lee Saunders, the first African-American president of AFSCME,  representing 1.6 million public sector workers, pointed out in a statement titled “The False Slogan of Right to Work: An Attack on Worker Freedom”:

“More than half of African Americans make less than $15 per hour. But belonging to a union is likely to lead to a substantial pay raise and superior benefits. African-American union members earn 14.7 percent more than their non-union peers. The union advantage for Latinx is even greater: 21.8 percent.”

There are two important reasons for this gain in wages. The civil service merit system, used to attain public sector employment by examination based on one’s ability to perform on a test, makes discrimination more difficult for the bosses. Furthermore, specific civil rights statutes in many state and local governments protecting women workers and workers of color from discrimination, won from decades of labor and civil rights struggles, have many more protections than similar federal and local laws for private sector workers.

The weekend before the court heard the Janus case, many thousands of workers organized Working People’s Day of Action protests in more than 25 cities on Feb. 24. Labor and civil rights groups held a protest in front of the Supreme Court during the hearing on Feb. 26.

Many of the rallies commemorated the 50th anniversary of the historic 1968 Memphis, Tenn., sanitation strike. At that time the predominantly African-American sanitation workers, represented by AFSCME Local 1733, walked out on strike for more than two months. This was the famous “I Am a Man” strike, which the Rev. Dr. Martin Luther King Jr. was supporting when he was assassinated.

One could say that the biggest demonstration against “right to work” now is the continuing strike of public school teachers in West Virginia. The overwhelming majority of the strike leaders are women.

The Big Lie of so-called right-to-work — that is, the so-called “right” to not be in a union — was coined by Texas oil lobbyist Vance Muse in the 1930s. He opposed the unionization of U.S. workers and helped pass the first anti-union laws in Texas.

Muse was editor of The Christian American and worked for the  anti-Semitic and anti-Black Southern Committee to Uphold the Constitution. He also used his segregationist views as an argument against unions, stating that with unions: “White women and white men will be forced into organizations with [racist slur] … or lose their jobs.” (Labor Notes, Aug. 3, 2017)

Muse also fought against against the Adamson Act, which gave an eight-hour workday to railroad workers. Instrumental in passing a number of anti-union laws in the South, he proposed and campaigned for a right-to-work amendment to the U.S. Constitution. While Muse failed then to get the amendment passed, 28 states now have anti-union right-to-work laws.

The roots of right-to-work go further back — to #28, Democratic Party President Woodrow Wilson, from Virginia. Wilson’s racism is obvious given the 1915 film showing at the White House of the racist, pro-lynching movie glorifying the Ku Klux Klan, “The Birth of a Nation.”

Prior to Wilson’s inauguration in 1913, African Americans had been making slow but steady progress in federal employment and were about 5 percent of all federal civil servants nationwide, working side-by-side with whites. Then Wilson segregated federal workplaces, including the railway mail service, which mandated curtains be installed to separate Black and white clerical workers and required segregated lunchrooms and restrooms.

On May 27, 1914, Wilson’s Civil Service Commission issued a new order requiring that applicants for federal jobs submit a photograph — so African-American applicants could be excluded. The NAACP and the historically Black National Alliance of Postal Employees (NAPE was formed in 1913 after Black people were excluded from the Railway Mail Association) campaigned for many years against the racist use of the application photograph. The National Association of Letter Carriers, while battling to keep Jim Crow branches out of its organization, voted at its 1939 convention to support abolition of the discriminatory photograph, which was finally abolished on Nov. 7, 1940.

It is in the interest of all public sector, private sector, organized and unorganized labor, and precarious workers to collaborate, unite and  invoke the great labor slogans: “An injury to one is an injury to all.” That echoes the refrain from the great labor song, “Solidarity forever, for the union makes us strong!”