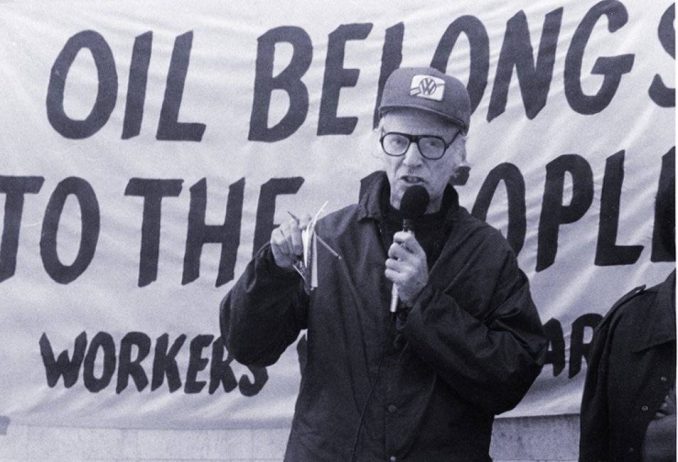 When Milt Neidenberg joined the group of revolutionaries in Buffalo, N.Y., who would later found Workers World Party, it was the beginning of the anti-communist witch-hunt period that changed everything after World War II.

Milt was a veteran.  He had enlisted in the Navy and was based in Nicaragua during World War II, with lingering bouts of Weil’s disease to show for it, and he had spent a few years at Brooklyn College in New York City on the GI Bill. At the urging of his cousin, Dorothy Ballan, and her comrade, Sam Marcy, Milt visited Buffalo.

Milt was looking for something that could make more meaning in his life. With his signature Navy peacoat, his penetrating but warm gaze, and his Brooklyn Jewish humor and charm, he was exotic in depressed, repressed Buffalo – where it seemed that every intersection in the impoverished working-class neighborhoods sported three bars and a church.

What he found was a political outlook that would inform his actions and his ideas for the rest of his life, until he died on Feb. 4, at the age of 96, at home in Brooklyn with his beloved comrade, Rosemary Neidenberg, at his side.

Milt accumulated experiences in the class struggle as a steelworker in Buffalo and later as a unionized worker in New York City. This and his great interest in and study of U.S. labor history and Marxism eventually made him into one of the Party’s leading dispensers of both practical and theoretical advice to a new generation eager to fight the bosses.

In Buffalo, Milt followed in the footsteps of another Party founder, Vince Copeland, and got a job at Bethlehem Steel – a plant with 16,000 workers at the time. In 1950, at the height of McCarthyism, Copeland had been fired for leading a wildcat strike there. In response, all the workers walked off their jobs. They stayed out for three days as the company and top bureaucrats in the Steelworkers Union frantically tried to end the strike.

He would much later give a series of classes for members of Workers World Party that discussed the political problems facing the working class after the tremendous struggles and gains of the 1930s. (Most are available on YouTube.) As Milt explained, the bitterness that existed because of a deep split in the world communist movement had a chilling effect on labor’s struggles.

The Communist Party, which had led very heroic organizing struggles during the Depression, endorsed the Roosevelt government, especially when the U.S. and the USSR became allies in World War II. The CP supported a wage freeze and a no-strike pledge during the war. Profits were also supposedly frozen, but in fact, the corporations made out like bandits on war contracts. A major reason for the big strike wave in 1946 was that wages were still at Depression levels.

The Socialist Workers Party, which had also been involved in important labor struggles in the 1930s, most notably the Minneapolis general strike, opposed the war-time restrictions on labor. Eighteen of its leaders were jailed during the war for violating the Smith Act. (Later, the same act would be used against the CP.)

The Buffalo comrades comprised a branch of the SWP when Milt arrived in the city. But by that time, the Cold War was on and it was the CP, not the SWP, which was being repressed by the U.S. government.

Eventually, the comrades in Buffalo; Youngstown, Ohio (another steel city); and a group in New York City, known collectively as the Marcy tendency, left the SWP in 1958 after more than a decade of deep differences over that party’s accommodation to anti-Sovietism.

Milt and Rosie were among the stalwarts who then founded Workers World Party on Jan 1, 1959. It stood out for its support of all the socialist countries against imperialism and internal counterrevolution – as well as its position on the Black struggle in the U.S. WWP went beyond supporting Civil Rights and an end to segregation to upholding the right of oppressed nations to self-determination.

The Neidenbergs moved to New York in 1965 and from then on were engaged in the many struggles led by the Party across the country. At this point, let’s hear from some of the scores of activists who worked with and learned from Milt over the years.

Decades of revolutionary advice to workers

At the membership meeting of United Steelworkers Local 8751, Boston School Bus Drivers Union, held on Feb. 15, President Andre Francois and Vice President Stevan Kirschbaum led a tribute to Brother Milt Neidenberg:  “For 44 years, from the time of the union’s three-strike founding struggle in the 1970s, through subsequent contract battles, strikes, rallies, political campaigns and daily skirmishes with the companies and their state, up to only weeks before his death, comrade Milt was the mentor, teacher and adviser to the leaders of this militant, fighting, majority Black, Brown and immigrant local.

“Guided by decades of collective ‘on the line’ experience of the Party and his ‘Marxism is as Marxism does’ philosophy, Milt provided invaluable political analysis, relationship-of-forces assessments, brilliant and creative tactical advice, and ever-present passionate solidarity. He exemplified revolutionary Bolshevik unionism and, until his last breath, fought for the liberation of the workers and oppressed.” At the close of the tribute, the membership voted unanimously for an honoring resolution and a contribution of $1,000 to continue his life’s work.

Bill Doares first met Milt in May 1968: “The burning issue in the city was the racist teachers’ strike against Black community control. Milt spoke about how he, a lifelong unionist, had crossed a Federation of Teachers’ picket line to teach in Ocean-Hill Brownsville (in Brooklyn) and support the Black community. Here was this middle-aged white unionist with a classic Brooklyn accent, a WWII Navy veteran, Teamster and former steelworker who was standing with the Black community against racism. He also organized delegations of comrades to go to New Jersey to support the United Black Brothers, Black autoworkers fighting racism at the Linden and Mahwah auto plants.

“Milt organized interventions and disruptions against utility, rent and transit fare hikes at City Council and public service commission hearings. He helped to set up the Center for United Labor Action, whose slogan was: ‘If you don’t have a union, fight to get one. If you have a union, fight to make it fight.’ Our intervention in a major telephone workers’ strike promoted solidarity between the mostly male craft workers and the unorganized, mostly women Black and Latinx operators. It led to a successful organizing campaign among the operators, led by comrades Sue Steinman and Gavrielle Gemma.”

Donna Lazarus: “Milt was our stalwart champion in the face of greedy, vicious bosses. We learned how to never stop fighting for our rights as workers, Black and white, all nationalities, women and men, together. Milt was always willing to try to help us in our struggles on the job. He gave us his time and his vast experience.”

David Sole and Joyce Sole: “It is doubtful that our generation would have been able to find our way to revolutionary Marxism-Leninism without Milt and the other Party founders. Or we would have made so many avoidable mistakes. The invaluable guidance I [David] personally got from Milt, especially in the early years when I went into General Motors’ Fleetwood Plant, was critical. I can’t count how many letters and especially phone calls went between us as a young communist tried to navigate in a plant of over 5,000 workers.

“Figuring out how to fight the company and maneuver around inadequate (at best) union leaders was always Milt’s forte. This was especially true when GM fired the ‘Fleetwood 10’ after we took leadership of a two-day wildcat strike. Then over two years of struggle followed to first defeat union officials who betrayed us and then defeat the company when our grievances were reinstated by the Constitutional Convention Appeals Committee. Through it all Milt was only a phone call away.”

Martha Grevatt: “Many times over the years, as a Party labor activist, I sought Milt’s wise advice. His thinking on the crisis of leadership in the current U.S. labor movement as well as his ability to apply classic Marxist economics to the contemporary crisis of capitalist overproduction – both of which have had a devastating impact on autoworkers like myself – informed many articles that I wrote for this newspaper. His comments on the regular conference calls that we had as a fraction to support the fired Boston school bus drivers were a tremendous contribution to our discussions, both theoretically and tactically.”

Fred Goldstein: “Comrade Milt was a truly class-conscious worker who was part of the Marcy tendency in Buffalo during the formative years of Workers World Party. He was a highly political steelworker, steeped in Marxism and Leninism, who used his political knowledge to promote the class struggle in the unions. Milt tutored several generations of labor unionists to fight against the reactionary bureaucratic tide within the U.S. labor movement, while at the same time doing everything to strengthen the unions against the bosses. He was an exemplary revolutionary who promoted proletarian internationalism, anti-imperialism, anti-racism, immigrants’ rights and women’s and LGBTQ rights within the unions.”

Bob McCubbin: “Milt had a way of always bringing the conversation around to politics, always offering a class-conscious, Marxist analysis, which, I had to admit, made sense to me, the son of a widowed mother, a poor, low-wage worker with four children who was always scrambling to make ends meet. Rosemary and Milt’s self-sacrificing dedication to human liberation through communist revolution moved this young idealist to develop a deep love for them and, ultimately, to join them.”

Minnie Bruce Pratt: “For almost three months in the spring of 2002, when I was out of work, Milt taught me Marxist economics. Every week I would come to him with questions like ‘A McDonald’s worker cooks a hamburger that gets eaten. Not like a car! Where’s the surplus value?’ He said: ‘The current socialization of labor is marked by subdivision of tasks into smaller and smaller units of production, and into more and more geographically distant or isolated units of production. The challenge is to make visible the hidden creation of value.’ My first ‘homework assignment’ from him was to make visible that value in a flier for the Stop Workfare campaign. People on public assistance, the majority women of color, were being forced to do city maintenance jobs for no pay. Later I wrote poems making visible the worth and connection between workers’ lives.”

Edward Yudelovich: “In September 1972, a group of Palestinians took Israeli athletes hostage to exchange them for 200 Palestinian and Lebanese prisoners in Israeli jails. Both Palestinians and Israelis were murdered by West German police and military forces, resulting in a wave of worldwide anger against the Palestinians. Sam Marcy asked me to write a leaflet explaining to workers this complicated issue and to consult with Milt.  Milt understood the importance for Jewish revolutionaries and communists  to support the Palestinian people and refute the Big Lie of Zionism – that the state of Israel is the antidote to the bigotry of anti-Semitism – when instead Israel has been one of history’s worst bigots and aggressors in its 70-year-old racist occupation of Palestine.”

A memorial meeting will be held on March 31 in New York City, place and time to be announced.