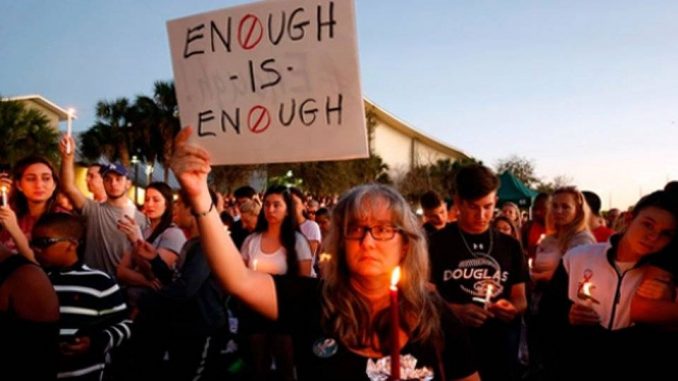 The young people who survived the Feb. 14 massacre at Marjory Stoneman Douglas High School in Parkland, Fla., are doing the right thing. They are not bottling up their shock and sadness, to live with fear and trauma over the gunning down of their friends, as has happened after so many other mass shootings in the past. They are fighting mad and organizing to try and change the world around them.

Many hundreds of students walked out of schools in both Broward and Miami-Dade counties in solidarity with those in Parkland who had lived through the shooting, as well as in remembrance of the 17 people who perished in the hail of bullets. One hundred of the Parkland teenagers then took a seven-hour bus ride to attend a session of the Florida House in Tallahassee, where a bill to ban assault weapons was on the table. Despite the students’ angry pleas, the legislators refused to take up the bill.

The youth then went to the media to denounce politicians whose votes are bought by big contributions from the National Rifle Association.

What is important here is not that these students might have illusions that a gun-control law will fix the problem. What is important is that they turned their grief and shock into concerted action against the powers that be. They were not passive or paralyzed in the face of such an unbelievably horrendous experience. From many different backgrounds and identities, they came together to try to take destiny into their own hands.

Where gun violence comes from

Gun violence in this country has been an awful reality ever since the first European settlers mowed down Indigenous peoples in order to take their land. Guns made it possible for agents of the Southern slavocracy to kidnap whole families from Africa, taking away all their human rights so they could be bought and sold as profit-making commodities. Hired guns made it possible for the Rockefellers and other robber barons to break workers’ strikes in the early days of union organizing, and cops with guns are still called out whenever there’s a picket line or a protest.

The AR-15 assault rifle, the fearful weapon used to massacre the Parkland students, is but one of the death-dealing devices developed for the Pentagon to carry out its imperialist interventions around the world.

What causes a young man to take such a weapon into a school and kill his fellow students? CNN reported on Feb. 18: “In a private Instagram group chat, confessed school shooter Nikolas Cruz repeatedly espoused racist, homophobic and anti-Semitic views and displayed an obsession with violence and guns.” As with Dylann Roof, who slaughtered nine Black parishioners in Charleston, S.C., in 2015, racism was a big factor in Cruz’s violent act, even though the majority of students he killed were white.

He was also immersed in the state-sponsored gun culture. The book “National Security Cinema” documents how the Pentagon and CIA have worked with Hollywood to produce more than 800 films and over 1,000 network TV shows that glorify war. And how many more make heroes out of the police and their guns?

Guns in the hands of the military, the police and the Nazi-fascist-Klan right wing — as seen last summer in Charlottesville, Va. — are meant to oppress and repress the people.

When the workers and oppressed arm themselves — as did Robert Williams and the Monroe, N.C., branch of the NAACP in the 1960s, the Black Panther Party founded in 1966 and Native people at Wounded Knee in 1973 — it is a justifiable act of self-defense.

But you don’t hear the NRA or its paid politicians endorsing that.