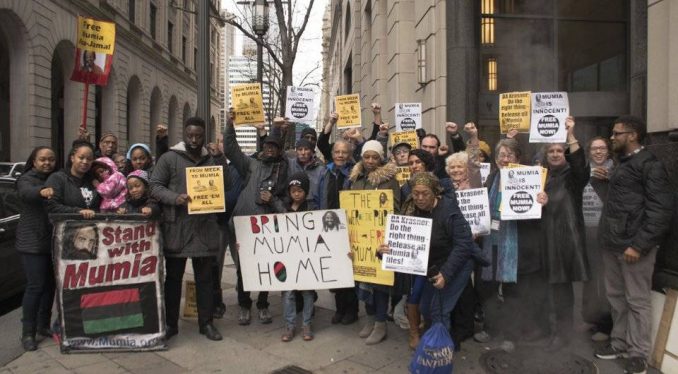 Supporters gather after court hearing for Mumia in Philadelphia, Feb 26.

Philadelphia — Dozens of activists once again filled the courtroom and demonstrated outside the Criminal Justice Center during a Feb. 26 status hearing in the ongoing appeals case for political prisoner Mumia Abu-Jamal.

The hearing before Judge Leon Tucker was supposed to be a report on progress made by the Philadelphia district attorney’s office in locating a March 27, 1990, memo from former Deputy DA Gayle McLaughlin Barthold to former DA Ronald Castille regarding the status of Philadelphia death penalty cases.

However, Tracey Cavanaugh from the DA’s office requested yet another extension, this time for 90 days.

Cavanaugh claimed the DA’s office had been unable to locate Barthold’s memo among hundreds of boxes of records from the 16 death penalty cases similar to Abu-Jamal’s up for appeals based on Williams v. Pennsylvania, a case in which the U.S. Supreme Court held that a judge was constitutionally required to recuse himself where he was previously involved in the case as prosecutor. The extension, she said, would provide time to search through the files of all 70 capital cases when Castille was district attorney.

Judge Tucker questioned the request for an extension, noting that he was the one to point out the existence of Barthold’s memo from his in-camera review of boxes of files in Abu-Jamal’s case last September. Tucker scheduled another status report for March 27, with a hearing on April 30.

Attorneys for Abu-Jamal, Judith Ritter and Sam Spital of the NAACP Legal Defense Fund, agreed to the extension on the ground that the district attorney’s office, now under new DA Larry Krasner, has indicated that it will be reconsidering its position on all the Williams-based appeals.

Gathered outside the court after the hearing, Abu-Jamal’s supporters promised to be back in court in March and April, vowing to keep up the pressure on Krasner to do the right thing — free Mumia Abu-Jamal!