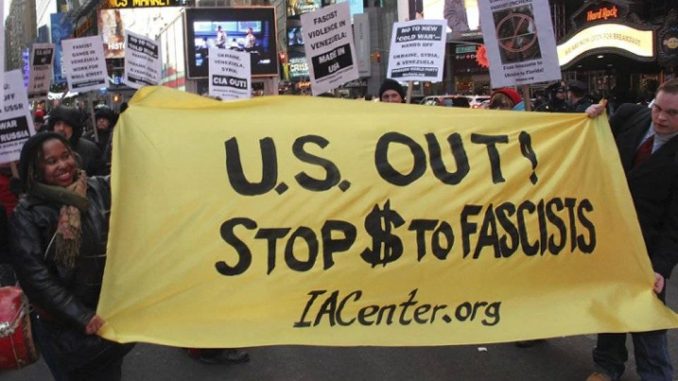 Based on a presentation given at a Workers World Party class in New York City on Feb. 20, 2018.

Four years ago this week, a coup overthrew the elected government of Ukraine. Both the Democratic and Republican wings of the U.S. government supported the coup. Leaders of both parties went to Kiev, the capital city, in late 2013 and early 2014 and proudly had their photos taken with leaders of the right-wing Euromaidan movement, including open neo-Nazis like Svoboda leader Oleh Tyahnybok.

Ukraine is a large country of 45 million people in eastern Europe. Before 1991, it was part of the Soviet Union. It was considered the Soviet breadbasket — an important source of agricultural products, the way we often think of places like Iowa or Kansas. It provided wheat and other essentials to the whole Soviet Union and other socialist countries and national liberation struggles.

The eastern part of Ukraine, called the Donbass region, was an essential source of coal and other mineral wealth. Ukraine also developed many high-tech industries in Soviet times.

After the USSR was broken up, Ukraine went through a series of increasingly pro-Western capitalist governments. In 2013, the government headed by President Viktor Yanukovych was being pushed by the European Union and the U.S. to break from Ukraine’s historic trading partner Russia. Yanukovych wavered but eventually decided to continue trading with Russia.

That was the death knell for his government.

There were other reasons, too. Ukraine was going to host a natural gas pipeline between Russia and Western Europe. The U.S. didn’t want this to happen. It wants to control the flow of energy to its erstwhile European allies.

There was also a military-strategic factor. Since 1999, the U.S.-led NATO military alliance has expanded four times, adding 13 countries, mostly former socialist countries of eastern Europe. This is part of the long-term U.S. strategy of surrounding Russia in order to break up the country and install pliant regimes.

Russia has an important naval base in Crimea on the Black Sea. For a long time, Crimea was part of Russia, but during Soviet times it was transferred to Ukraine. Russia continued to lease the base from Ukraine after the breakup of the USSR. Washington wanted that base.

To implement its strategy, Washington applied economic and diplomatic pressure from the EU countries. It mobilized nongovernmental organizations that receive U.S. funding. It worked with wealthy oligarchs in Ukraine who wanted closer ties with the West. And it used openly fascist, neo-Nazi political formations and armed gangs nurtured since the end of World War II. This was the motley alliance that carried out the coup of February 2014, supposedly against “corruption.”

After the coup, fascists took over the streets of Kiev and other cities of western Ukraine. Imagine the torch-wielding, white supremacists who marched in Charlottesville last year taking over cities throughout the East Coast of the U.S. and you’ll get the idea.

Together with the police and internal security forces of the new regime, these fascists invaded and torched offices of communist organizations, attacked immigrant communities and beat leftists in the streets. The new government’s official ideology was right-wing Ukrainian nationalism, as espoused by World War II Nazi collaborator Stepan Bandera. The regime declared that Russians were the enemy and only the Ukrainian language would be allowed.

In the eastern part of Ukraine, which was more working class and where Russian speakers make up the majority, an anti-fascist resistance movement emerged.

First, the people of Crimea organized a popular referendum and overwhelmingly voted to leave Ukraine and rejoin Russia. Knowing the U.S. sought to grab its strategic naval base, the Russian government agreed and took control of the region, protecting its residents from the looming war.

The Crimean referendum gave a big boost to the resistance in eastern Ukraine. The popular movement grew and became more militant. People took up arms and seized government buildings in Donetsk, Lugansk, Kharkov and other cities.

In Kharkov, the movement was pushed back by police and fascists. But in Donetsk and Lugansk, in the coal-mining Donbass region, the rebels were able to hold out. They organized their own referendum and declared independence in May 2014.

Ukraine launched a bloody war against the independence forces, claiming that the rebel militias were actually a Russian military invasion. Although some Russians did unofficially come to help, along with anti-fascists from other countries, the majority of the militias were made up of local workers and farmers defending their homes and families.

A terrible blow was the massacre in the multinational port city of Odessa on May 2, 2014. Fascists bused into the city then attacked a protest encampment and set fire to the House of Trade Unions, killing over 40 people.

Washington backed the coup government in Kiev to the hilt. Secretary of State John Kerry rushed there to deliver a multimillion dollar loan. Vice President Joe Biden made several visits, becoming the unofficial “colonial governor” of Ukraine under the Obama administration. The U.S. and its allies provided military aid to Ukraine, much of it through third countries. NATO provided training to Ukrainian troops and neo-Nazi volunteer battalions.

According to the United Nations, more than 10,000 people have been killed in the war. Hundreds of thousands more have been made refugees, most fleeing to safety in Russia.

The worst fighting took place in the first year. Now, the situation is frozen in a semiwar state. There is an internationally brokered truce, but it is regularly violated by the Ukrainian side. An economic blockade has created many difficulties for those who remained or returned to Donetsk and Lugansk. Recently, the Trump administration and Congress repealed restrictions on direct U.S. sales of heavy weaponry to Ukraine and the ban on training neo-Nazis like the Azov Battalion.

While Trump claimed he wanted better relations with Russia during his campaign, he serves the U.S. ruling class and its interests, just as previous administrations did. Trump has given free rein to the Pentagon generals whose job is to conquer on behalf of Wall Street.

The Ukrainian government has implemented more and more austerity measures to secure loans from the International Monetary Fund. It has sped up the privatization of industry and land, leaving workers jobless and forcing many to migrate. U.S and western European capitalists have been gobbling up Ukraine’s agricultural land and natural resources at bargain prices.

Repression is intense. Communist organizations and symbols are banned. There are hundreds of political prisoners — leftists, journalists, military draft resisters and regular people who have voiced their opposition to the regime on social media.

Although the war in Ukraine does not get much attention from mainstream media these days, its impact is being felt right now. The following things have happened so far in February: A fascist gang beat and robbed two anti-fascist youth leaders in front of police in Kiev. Ukrainian forces shelled a school for special needs kids in Dokuchaevsk, a village in Donetsk, while class was in session. Our comrades from the Ghost Brigade, a communist-led, anti-fascist militia, repelled an attack in Lugansk. The former head of NATO called for 2,000 U.N. “peacekeepers” to occupy the Donbass. And a new team of U.S. “advisors” was spotted on the front line.

The war in Ukraine is also part of the witch hunt over supposed Russian “election interference” that is currently being used to smear anyone who opposes the two-party system in the U.S. The U.S. rulers are angry that Russia and the residents of Crimea and Donbass were able to checkmate their plans to bring NATO tanks and ships right up to the Russian border. Along with the military aid that Russia has given to Syria, this is driving the campaign to whip up a war fever against Russia.

Since 2014, Workers World Party and anti-war organizations we work with, including the International Action Center, have engaged in international solidarity with the anti-fascist resistance inside Ukraine and in the Donbass republics. This organizing has resulted in educational forums, petition campaigns and protests, including one held in Times Square immediately after the coup four years ago.

WWP has developed friendly, cooperative relations with exiled communists from Ukraine. Our organizers have travelled to Russia, Crimea and the Donbass republics to meet with resistance activists and offer our support. Workers World newspaper has been one of the few sources for real news on the struggle there in the English-speaking world. We work to build solidarity here among the people’s movements against white supremacy, police brutality, anti-immigrant raids and exploitation of low-wage workers.

Stop the war drive against Russia!